Last week John aka John Bananas called himself Cockroach Man. He did this because he managed to scurry, scramble, and slide his way to safety yet again. There are rules to giving yourself a nickname. Most of the time, whatever you want won’t stick. You can’t really pick your own. But, if you are going to give yourself one, the more derogatory it is, the better the chance it will work. So Cockroach Man is a good choice. I personally refer to myself as the Trashcan Man because I shook a bottle of BBQ sauce that I had already taken the top off of and have been leaving a smoky trail on everything I touch like a delicious snail. After Abram refused to call him anything but John, I joined that bandwagon. But I do like Cockroach Man.

This week, Cockroach Man wasn’t as lucky. He and Creepy Cousin Uncle Vince have been putting work in for weeks to not get nom’d. They knew they’d have to see an elimination eventually, they’ve stabbed too many people in the backs and fronts to avoid The Pit altogether. It’s getting late into the game—not many people are left. You know how I know there aren’t that many people left? Because Rianna showed up for the first time in seven weeks. I haven’t seen her since she was feeding drunk Mitch delicious slices of cold cut meat in the top bunk. Seriously, was Aneesa just competing by herself for the last month? Let’s get Ri-ri some camera time. And some Boar’s Head for Mitch. Quality television.

The challenge this week was a mini-final. The five teams left had to race up a mountain, make it through a couple check points all while carrying a bag of weights. The women had 45 lb bags and the men had 70 lb bags. The check points were such things as crawl under this fence, crawl over this fence, climb on the monkey bars, and do a puzzle. But it was dope because at every check point, a different team took the lead. Aneesa and Rianna (get that airplay burn, yo) had a huge lead until Rianna couldn’t get past the monkey bars. Corey and Cousin Mitch Chase Budinger were in dead last because Corey has no ACL in one of his knees. But they came back and were able to win it all by solving the puzzle in thirty seconds while everyone else was struggling. The thing that stuck out the most was how gassed out every Bloodline was. All the Challenge vets (aside from Corey who basically only has one knee somehow?!?) were barely breaking a sweat. Cara Maria was running, and actually lapped Cockroach Man, while holding her bag around her neck. I guess these relatives finally got a real bonafide taste.

Jamie and Cara Maria came in last because they’re not good at puzzles and have to go into The Pit. Jamie, with his good Boston accent, was screaming “move that squah” (translation: square) the whole time they were trying to put the damn thing together. I’ve seen every Cara Maria Challenge and her Boston accent has only ever come out with her cousin there. It’s like that thing where you go away to college and lose your Queens accent but then when your high school friends come up to visit, you sound like you work summers at the Corona Ice King. Because Corey and Mitch won, they got to pick the other team heading in for elimination. After some solid wriggling by Cockroach Man, who is seriously able to come up with a justification for anything like his excuse for him and Vince not going in even though he has won as many Challenges as there are Mission Impossible movies is that Vince and him will send Cara and Jamie home but if they throw in a weaker team they could really stand to keep Jamie in the game as “a buffer.” A buffer for what? I have literally no idea and I spend more time watching this show than I do washing dishes in my house each week. Corey has been wanting Cockroach Man out since the jump so he does the smart move and throws the Champ into The Pit.

The elimination round is a two-parter. One person has to break through a brick wall with a sledge hammer. The other person has to crawl through and solve a puzzle. Both people can work on the puzzle once they both get through the hole. Cockroach Man tells his cousin Vince to “swing for the fences” which is the best line from M Night Shyamalan’s third best movie, Signs. Whoever stays, gets to go to Berlin. Cockroach Man calls this a once in a lifetime travel opportunity. Which I guess to be fair it is but also like it’s not when you’ve done more Challenges than there are James Bond films and have traveled extensively. The race is close and it looks like Vince and Cockroach John have it but TJ waves them off. Cara Maria is able to pull off an upset. Aneesa’s face is priceless. It looks like someone told her that her cousin Rianna has still been on the show with her all these weeks. Cockroach Man does not live to see another day.

Only one more event for the final. The last four teams are: Corey and Mitchy Budinger, Jenna and Brianna, Cara Maria and Jamie, and Aneesa and maybe nobody or maybe her cousin is still there, I’m not sure. None of the remaining vets have ever won first place in the Challenge. Truly the prize is wide open. 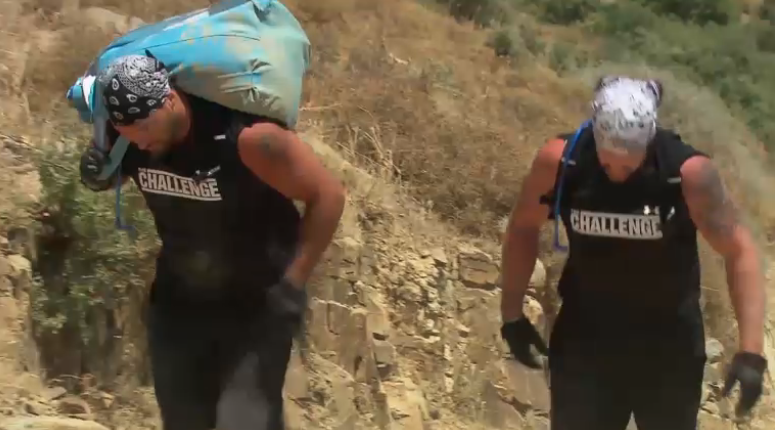