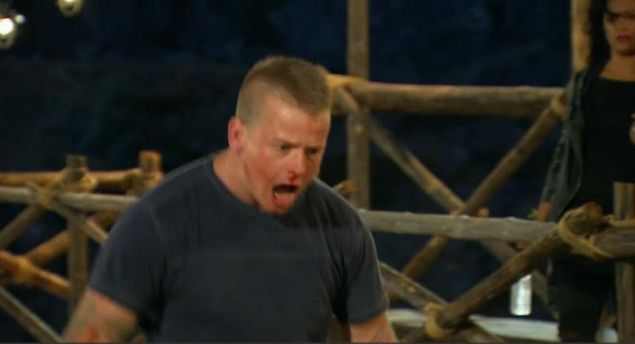 Here is why the Challenge is more beautiful than paintings. Because they have mastered the art of giving us the same exact story lines Again and Again, like Lenny Kravitz on repeat, and still having it be the most watchable thing on television. Guess what: John Bananas is manipulative. Ya, for eight years already. Abe is a lunatic. Well-worn territory. Cara Maria is having an existential crisis about getting to a final. And her boyfriend. And everything else. Seen it love it give me more. Please let the Challenge last forever.

With his alliance members dropping like the Extreme Poly Athletes from a plane in the Point Break remake, John Bananas has no choice but to get dirty. The house has a secret and he can use it to break the newly formed alliance of Abe, Cara Maria, Thomas, and their bloodlines. Because before Abe got there, Cara and Thomas were getting cuddly and going into locked bathrooms together. So John enlists Cousin Vince to break the news to Abe. Abe knows that Vince is manipulating him. Their conversation goes like this:

Vince: I heard some things.

Vince: Nobody else wants to tell you these things I’ve heard.

Abe: I’m not sure what you’re talking about.

Vince: I saw them.

Vince: I’m not trying to sink your ship here.

So Abe confronts Cara Maria and Thomas. They claim innocence. Then Cara admits to doing “massages and egg sandwiches” with Steven because she felt bad for voting him into the pit. Thomas must not have seen Pulp Fiction recently because Tony Rocky Horror got thrown out of a window for a similar thing. And so it begins. Abe is set off, hellbent on getting Thomas and Steven out of the house. He calls them out on the bus in front of everyone. All while John Bananas sits in the back smirking. John Bananas is like if Littlefinger and Rumplestiltskin from Once Upon a Time accidentally went into the transporting machine together, got morphed into one being, and then got a ton of sick tribal tattoos bro.

At the Challenge, everyone was hung 650 feet in the air and had to swing across some ropes. There’s always some “are you afraid of heights” banter at these Challenges. I firmly believe that you can not be afraid of heights and still not want to be 650 feet in the air. That is too high unless you are inside a building or are in fact an Extreme Poly Sports Athlete yourself. Abe watched Thomas fall (they’re attached to ropes and harnesses obvi) and was like “die, die, die.” Now I don’t know that Abe actually wanted to Thomas to die this way, actually I’m sure he didn’t because it wouldn’t have been Abe’s fault and I do believe he wanted to be directly responsible for whatever happened to the bearded twin Thomas. The Blue Team lost and had to pick someone to send into The Pit. Abe’s brother, Mike, volunteered because he felt like he hasn’t proven himself yet. Then the Red Team voted in non-bearded brother Steven because Cara promised not to say the twins’ names but then Thomas said he would vote in Cara’s cousin, Jamie, and oh snap is there no such thing as loyalty anymore in this bankrupt world?

The Pit was one of the coolest eliminations ever. There were two mock living rooms set up and each person had a sledge hammer. You had to break everything in the room into pieces small enough to fit through a small hole in the wall and clear it out. It was called Home Wrecker which is what Thomas did you Abe and Cara’s happy one. Abe was not competing in said elimination but that did not stop him from screaming for 1000 hours. Abe got so amped up that his nose started to bleed. Congratulations Abram for being the first player to ever bleed without even being in the competition. Do you know what happens when Abe bleeds from the face? He puts his finger in his mouth and licks it off. Standard. Then after tasting it to make sure it is of substantial virility and potency he rubs all over himself. That is how you root on your brother. Mike won because Abe might have actually hit him with the sledge hammer and put him through the hole one bone at a time if he didn’t. Later at the house, Cara Maria feels like having Abe there is really hurting her game. Again. And she is thinking of breaking up with him. Again. And John Bananas has had his puppets dance for him. Again. Bless. 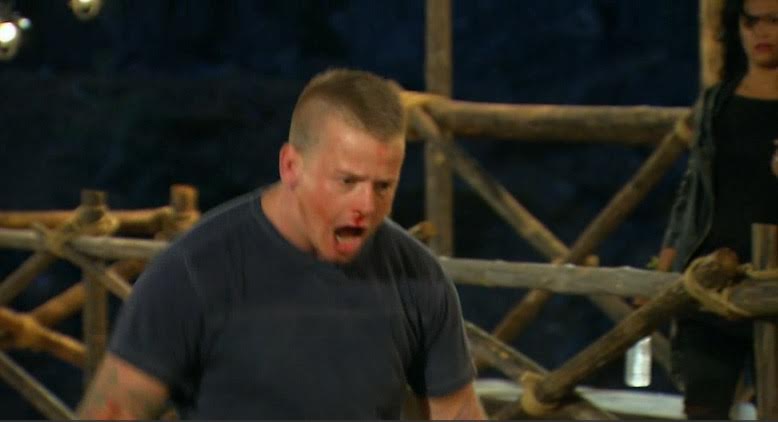