Popular entries in the space-war sub genre have  successfully reused a few time-tested tropes that fans have grown to love and accept. When you think of Star Wars or Star Trek, what are the first things that come to mind? Most would say the Starship Enterprise and the Millennium Falcon. While viewers are always looking for something fresh from the genres they subscribe to, certain staples are expected. That’s been my problem with SyFy’s The Expanse so far, but episode 5 titled “Back to the Butcher” may be a soft reboot into what could become a culturally significant series.

I’m not saying the first 4 episodes were terrible and in fact they were generally well-received by audiences (in the form of stable ratings) and most critics –earning it a second season. One thing that didn’t sit well with me was the lack of a consistent setting for the show’s anti-heroic group of shipmates caught in the middle of an emerging conflict. And by setting I mean an awesome spaceship. Star Trek: Deep Space 9 had The Defiant, Battlestar Galactica had the Battlestar Galactica, Firefly had the Serenity, Star Trek: Voyager had the Voyager and so on. 4 episodes into the space-based, space-war-driven The Expanse, we still had no ship (battle or otherwise) to fall in love with.

The former ice-hauling crew of the Canterbury have done quite a bit of ship-hopping since the pilot episode and 2 of those ships have been completely obliterated. Now, because of a deal made by their leader(?) Jim Holden who assumes hierarchy over his shipmates even though the shuttle he was temporarily made captain of was destroyed in episode 1. The irony is that in that episode, a significant amount of time is spent establishing Holden as an individual who DOES NOT want to lead AT ALL. So just 4 episodes later his character arc has somehow come full circle.

While this seems like shoddy long-term planning by the showrunners, I think it was done purposefully to give the show a fresh start or at least settle the story in a way that makes viewers comfortable enough to invest in its future. Even the sub-subplot of Holden searching for a decent cup of coffee comes full circle as he finds some that he doesn’t hate aboard the crew’s new ride, The MCRN (Martian Congressional Republic Navy) Tachi –which they escaped the Mars Naval vessel with before it was destroyed.

The crew finds themselves in the same jam they’ve experienced in every episode. They are on this new ship but they’ve got nowhere safe to go with it. They have been passengers on two ships that have been destroyed my military-grade weapons and that makes them look like terrorists. It doesn’t help that they live and work in the Asteroid belt where dissent is growing among the workers just like them. While the crew of the Mars Naval Vessel facilitated their escape so that Holden could explain that Mars was not responsible for destroying the Canterbury, proving what happened on that ship could be difficult without any records or witnesses other than Holden’s crew. The single Mars naval officer that escaped with them died from injuries during the escape.

They can’t go to Mars with a believable enough story and they can’t go back to Ceres station with a Martian military craft because the destruction of the Canterbury has become a call for revolution with the phrase “Remember the Cant” being shouted throughout the unrest. The Belter population still suspect the culprits to be from Mars and have turned Holden into a symbolic hero after his hasty broadcast following the nuclear attack on the Canterbury. Banksy style graffiti featuring Holden can be found throughout Ceres station.

They do have one option though and that is Fred Johnson –who offers to bring them in and keep them safe. In the previous episode, it’s established that Johnson is a higher-up in the OPA and may have orchestrated not only the attack on the Canterbury but the attack on the Mars navy as well. Holden and his crew have no clue of this but Naomi Nagata, the crew’s engineer, does know who he is and expresses her distrust of him.

So who is Fred Johnson or better yet who WAS Fred Johnson? We are treated with The Expanse’s first flashback which was cut into the entire episode as if it were previously established as a narrative device in the expanse much like Lost. It was not. Another reason I saw this episode as soft reboot of the series. It’s very different from the previous episodes.

The flashback tells the story of Anderson Station – a dilapidated industrial facility crowded with Belters who seem to all be the laborers of the station. These Belters have seized the station from their Earth-based corporate employers and intend to peacefully negotiate terms with the United Nations –who act on behalf of the corporation as law-enforcers. While among the laborers are those who wish to hold out rather than deal with the UN, the leader of the protest wants to have a quick, peaceful resolution. He pleads via video message to the UN that children aboard the ship (I assume the laborer’s children?) are developing illnesses due to the lack of clean, breathable air. The scene is actually devastating because he holds a sick young girl in his arms while explaining.

The UN doesn’t respond and in fact cuts all communication with the occupied ship before cutting off their generators. What comes next is tragic and the show finally accomplishes the task of making consequence out of space conflict. The UN fires on the ship, destroying it. We see the leader of the protest still holding the young girl while floating dead among the many bodies in the vacuum of space. Who is the cold, soulless monster that committed this act? United Nations Marine Colonel, Fred Johnson or as the show subtitled under him in the revelatory scene: “The Butcher of Anderson Station”

So what’s going on here? How did a former UN Marine become an OPA “terrorist”? Probably guilt. A reformed Fred Johnson is using the skills he learned as an enlisted murderer for the UN to now help the OPA claim their place in the solar system and have a home for themselves. I knew there was a reason they cast Chad Coleman as this character. In The Wire He played fan-favorite ‘Cutty’ –a notorious convicted criminal who reforms and begins helping at-risk children in Baltimore.

“Earthers get to walk outside into the light, breathe pure air, look up at a blue sky and see something that gives them hope and what do they do?” asked industrial manager and OPA operative, Anderson Dawes to Detective Miller on the crumbling Ceres Station. “They look past that light, past that blue sky, they see the stars and they think: Mine” This is the story of The Expanse and it’s about time the showrunners put it out there in plain speak.

Ceres Station is in complete upheaval. Daily riots, protests and crime have become commonplace while the station’s purpose of producing resources is suffering. The OPA now control all aspects of production because all the hard laborers are agents and are becoming less and less shy about advertising the fact.

For the first time since starting this show, I am actually eager to see how this plays out. There is now a clear hero, villain and even a wildcard (Mars). The Earth-based United Nations has spent generations exploiting and killing the Belters –justifying the dissent on Ceres Station and the secret development of advanced weapons technology. The only way for the Belters to stop the injustice is to make the asteroid belt their permanent home and I think this will drive the plot of the show rather than the missing girl that was used in SyFy’s marketing. It’s a simple and broad enough concept that’s been certainly done before –but that’s ok.

The everyday sci-fi TV viewer likes to feel at home when investing themselves in a series but expect a shiny or fast spaceship to play with for a while. In our last few moments with Holden and his crew, we see them finally making a home aboard their current ride after simply renaming it the Rocinante —which is spanish for work horse.

After this episode, The Expanse itself may be a completely new ride. 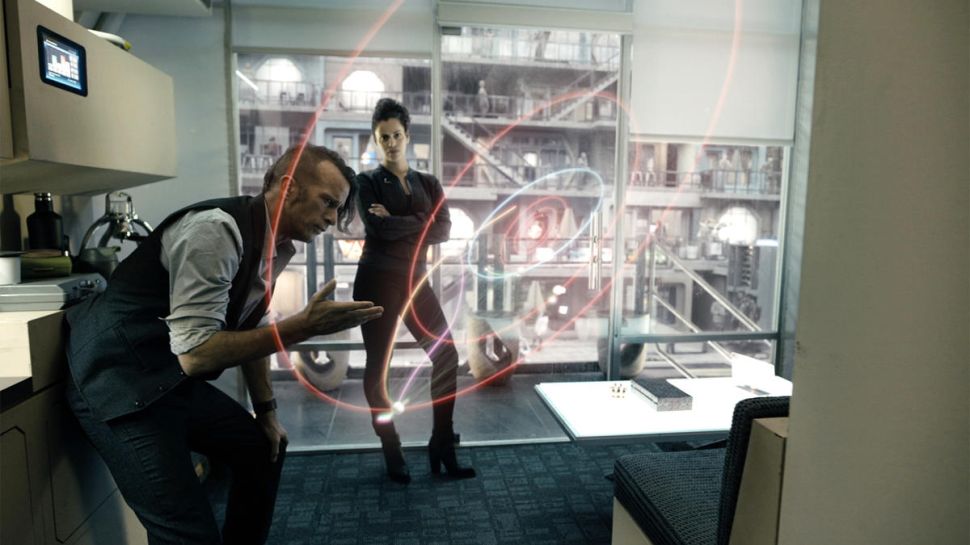