First, we should acknowledge another literary classic that seems to act as a namesake for Holden, J.D Salinger’s 1951 work Catcher in the Rye. The novel follows Holden Caulfield, a naive teenager who puts oceans between himself and the rest of the world with his brazen nihilism.

We see this trait early on in The Expanse when introduced to James Holden, a seemingly everyday ice hauler carrying on day-to-day without any direction or purpose. When Holden is offered a promotion to second-in-command of the now-destroyed Canterbury, he denies it. After seeing the previous occupier of that position lose himself in the nothingness of deep space, he himself cannot accept any other fate in what he perceives as a meaningless existence.

While Holden initially comes off as the careless everyman whose only aim is to find a decent cup of coffee in the void of the Asteroid Belt, we do see him attempt to force longevity with the Canterbury’s navigator –who he had maintained a sexual relationship with. Her death drove him further into despair while his cynicism for his situation and the circumstances for those around him grew.

Like Holden Caulfield, James Holden is an underachiever and uses this as an excuse to not accept leadership or responsibility. Like Caulfield, he is a character of contradiction and this contradiction is crucial in establishing an arc for these characters. Their nihilism comes off piercingly early on but eventually evolves into rebellion.

In The Expanse, James Holden has undergone the transformation from nihilist to rebel over the course of six episodes that saw widespread death and destruction –all witnessed by himself and his ship-hopping crew. That moment occurred before being captured by the Martians when he broadcasted a video message charging them with the nuclear destruction of the Canterbury. This message fueled the unrest in the Asteroid Belt and brought the struggle of the exploited Belters into the conflict between the solar system’s superpowers.

In the current episode, Holden is in full command of his shipmates aboard the newly christened, former Mars warship, The Rocinante. In The Ingenious Gentleman Don Quixote of La Mancha, “Rocinante” was the name given to Quixote’s horse.

Rocin translates to “workhorse” or “low-quality horse” and can also mean “illiterate” or “rough” man. Ante, in Spanish, can mean “previous” or “in front of”. When combined, it implies transformation from –in Quixote’s horse’s case– “old snag” to “foremost steed”. Shout out to Wikipedia for this info. Please give them money.

“A name, to his thinking, lofty, sonorous, and significant of his condition as a hack before he became what he now was, the first and foremost of all the hacks in the world” Said Cervantes on the reason why Quixote picked that name for his horse. It’s well known that he wrote Rocinante to be Quixote’s thematic double as they both pursue (or are given) tasks beyond what they are capable of.

This basically sums up what we’ve seen James Holden go through so far in the series. From an aimless ice-hauling grunt to a ship captain caught in a complex power struggle between the United Nations, Mars and the Outer Planets Alliance. And yes, it does seem that there are “hacks” on all sides. Mars was built up early in the series to be this great military might but was easily taken down by OPA agents. The UN has exponentially more power than the version that exists today but seems to have very little intelligence on what’s happening throughout the solar system.

The title of this episode “Windmills” is also a direct reference to the tale of Don Quixote. “Fortune is guiding our affairs better than we ourselves could have wished. Do you see over yonder, friend Sancho, thirty or forty hulking giants? I intend to do battle with them and slay them. With their spoils we shall begin to be rich for this is a righteous war and the removal of so foul a brood from off the face of the earth is a service God will bless.” Quixote says to his “squire” Sancho Panza as he sees dozens of windmills rising from a plain.

Quixote’s delusion in the novel spawned the term “Tilting at windmills” which according to the The American Heritage Dictionary of Idioms means “confrontations where adversaries are incorrectly perceived, or courses of action that are based on misinterpreted or misapplied heroic, romantic, or idealistic justifications”

What does this mean for the character of James Holden? That he is now, in this episode, coming up on a plain with “windmills” or the UN, Mars and OPA and how he perceives them may not be what they are. Knowing exactly what Holden’s perception is can only be determined by how much we know about his time before the conflict.

This search brings us to back to Earth as UN Undersecretary Avasarala journeys to a Montana farming collective in the North American Trade Zone.

Avasarala is on a rogue mission without her usual security to find James Holden’s mother and to discover what his role may be in this sprawling conflict. We learn a little bit more about his past that was previously touched on during his interrogation by the Martian navy in a previous episode.

James Holden grew up on this Montana farm and is the son of a family co-op that consists of three mothers and five fathers.

When speaking to his mother, Avasarala threatens her with a perceived, damming reason for Holden’s conception: “James Holden was conceived by a cult of political extremists as a trick for eight people to claim generational land rights.” Holden’s martian interrogator also made this claim.

It’s unclear if that statement is true but we do know that Holden’s family has had issues with the government and have been involved with protests in the past –protests that a young Holden took part in. Avasarala also charged that he “fell in with radicals because it reminded him of home,” referring to a possible theory as to why Holden is constantly caught in the crossfire of an evolving conflict.

Avasarala connects with Holden’s mother using her own lost son and gets the reluctant farmer to open up. She learns that Holden may have joined Earth’s navy to rebel against his family and determines that he ultimately has “mommy issues.” Holden’s mother claims that he saw himself as a “knight” who was eager to find adventure at a young age.

Avasarala notices a few printed books and especially Don Quixote which Holden’s mother said he enjoyed but never learned was actually a tragedy. In Cervantes’s novel many would argue that Quixote’s declaration of himself as a “knight” and his pursuit of adventure along with his undirected idealism and nobility, led to his downfall. Is this where the undirected James Holden is heading? Why is The Expanse painting this literary comparison so strongly?

As Avasarala walks away from the farm concluding that Holden’s role in the conflict is relatively benign, she gets a call from her boss with intelligence gathered from their spy and learns that Holden is flying in a converted Martian gunship with fake transponder codes supplied by the OPA’s Fred Johnson. This couldn’t be more suspicious.

The United Nations will now send a black-ops team to kill Holden. 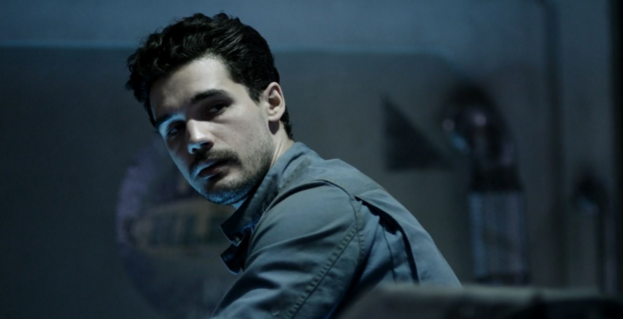