It’s been a season filled with ups and downs for The Expanse but with its latest installment, “Salvage,” the space opera may have finally earned a place among science fiction serials that transcend the saturated genre.

The episode is a finely tuned thriller and evokes the dread of the unknown previously seen in James Cameron’s Aliens —and even a similar story to the classic space-horror film.

For the first time since Julie Mao’s introduction in the first episode of The Expanse, we come across a spore-like entity that seems biological and “alien” in nature.

The organic, fungal-like organism is found aboard The Anubis –where James Holden and the crew of The Rocinante have been sent by OPA leader Fred Johnson to find an agent of his organization. The crew discovers the ship camouflaged with highly-advanced stealth technology and determines that it’s the same ship that nuked their former home, The Canterbury.

Now we know that The Anubis is the ship where the missing Julie Mao is floating through in the first scenes of the show’s premier.

They also find evidence that at least some of the crew of The Scopuli was on board before the vents were opened and the ship became uninhabitable. The Scopuli was the same ship that James Holden intercepted a distress beacon from in the pilot episode and that was probably used as bait to destroy The Canterbury.

As for the weird “alien” organism, the crew finds it covering what looks like the ship’s main engine and are baffled by its existence and presence. When the crew returns power to the ship, it becomes aggressive.

After more investigating aboard the Anubis, they determine that a shuttle craft is missing and that it’s headed to the “murder capital” of the Asteroid Belt, Eros. They intend to follow this lead to this yet-unseen but much talked-about place.

On there way out, The Rocinante launch a nuclear missile to destroy the mysterious stealth ship while James Holden whispers “Remember The Cant”. Not exactly revenge but certainly a start.

The crew’s ultimate search is for Lionel Polanski and it was originally Fred Johnson who sent them on this mission. Now, they are searching for this figure to find answers regarding the destruction of The Canterbury and how Johnson or Polanski is involved.

Before I get into what a shithole Eros becomes 200 years into the future, let me drop a little background science for you. Named after the greek god of love, Eros is the second-largest near-Earth asteroid and was discovered by Carl Gustav Witt in 1898. It’s orbit crosses the orbit of Mars and was the first asteroid known to do so.

We don’t know exactly how long it’s been there but we do know that because of changing gravitational forces, it will one day break that orbit and potentially join Earth’s. It’s also categorized as a possible Earth-impacter similar to the size of the asteroid that killed the Dinosaurs.

Does this back-story matter in The Expanse? Maybe just thematically. What was once a “Jewel of the belt,” Eros is now a perfect dystopian hellhole and one fitting for the show’s tone and bleak outlook on a human-colonized solar system. The story’s many storylines including the conflict brewing between Mars and Earth, seem to be converging here.

No-longer-a-Detective Miller has found his way to Eros in the search for the missing Julie Mao and Tom Jane seems to have finally settled into the character after being given a leff-claustrophobic setting and a more action-driven script to work with. Now, as I pointed out previously, the writers attempt to bridge our present day culture with that of the people living in the asteroid belt using a few staples of everyday life.

Detective Miller’s smartphone is basically a character in the show and gets plenty of screen time, everyone uses deteriorating mass transit (have you been on the D.C metro lately?) and my favorite: Drones. Drones everywhere. Drones with cameras. We always experience these new norms of everyday life through Miller.

I can’t help but think that he is the character that sees his universe the way the viewer is supposed to. Especially given Miller’s old-school attitude, style, and that stupid hipster hat (which we unnecessarily learn the origin of). Miller is also drunk on the job quite a bit, which I don’t know about you guys but I was pretty tipsy at the last American Astronomical Society Conference.

Anyway, back to bridging their universe with ours. Miller gets off the transporter and immediately begins his search for Mao which takes him to a record keeper. This inked, sweaty man will remind you of at least 1 person in your life. He’s glued to his Ipod(?) and playing what looks like a descendent of Candy Crush Saga except you pay and lose real money.

Wait, does Candy Crush use real money to buy credits and stuff? If so, thats fucked up. But that was the preoccupation of this guy and Miller gives him money to “sponsor a round” of the game in exchange for some information. But of course, it being badass Tom Jane, Miller assaults him and is apprehended by security.

Now we meet a former cop friend of Miller’s and the man who gave him that ridiculous hat. Their rapport implies a long history and the two go for a meal in what looks like a shanty town on Eros. It’s very reminiscent of the western worlds seen in Joss Whedon’s Firefly.

Miller’s search for Mao has now become the search for the previously mentioned Lionel Polanski. As revealed by his friend, Miller now knows that Julie Mao arrived on Eros via a shuttle and using that name. This is the same shuttle that the crew of The Rocinante suspects departed The Anubis and headed towards Eros.

This episode is a big payoff for those who have invested in the show and a huge turnaround for “critics” like myself who have said not-so-nice-things about the show’s development. The convergence of the The Expanse’s two anti-heroes Miller and Holden was long-awaited and brought the show –along with its sometimes-confusing plot– into sharp focus.

The search for the mysterious Mao has led Holden and crew to the lobby of a seedy motel where the tension builds as every second passes. The editing screams buildup and you know something epically violent is about to occur. Ominous elevator music plays in the background as strange characters are seen surrounding the crew.

The front-desk clerk is nervous and sweats in fear. After he gives up the room number for “Polanski” or Mao as we now know, the UN spy who is a prisoner of The Rocinante, makes for an escape and triggers a shootout.

Every person in that lobby pulls out their gun, some automatic, and begin firing. Holden and his crew get pinned down by thugs who were tipped off earlier by Kenzo, the spy.

They are soon rescued by Miller who shows up a few minutes late to the party but comes packing heat. Tom Jane really stands out here while establishing himself as the heavy hitter and main draw to the The Expanse. When it comes to action, he’s a natural.

The final moments show an immediate bond between Miller and the crew of The Rocinante as they make their way to Julie Mao’s room. The chemistry makes Miller seem like the missing member of the crew and I hope the writers keep these characters together.

Bringing the search for Julie Mao to a morbid end, she is found dead and covered in the “alien” entity the crew discovered aboard The Anubis.

Not the show’s first cliff-hanger but the first to trigger that must-watch, binge-inducing feeling we’ve all fallen victim to in the past. Not complaining though. 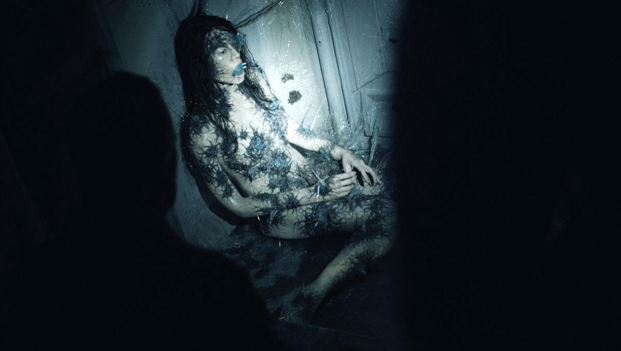