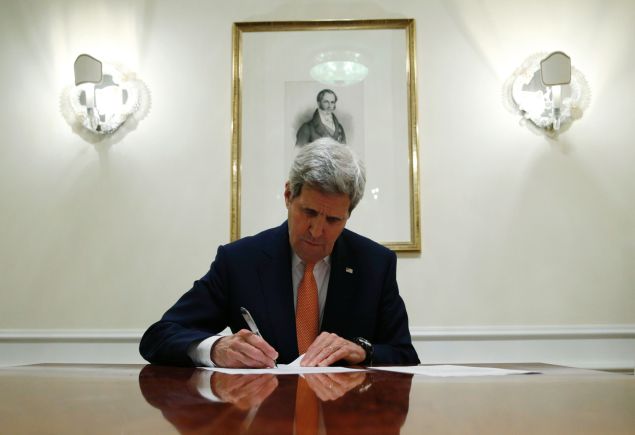 US Secretary of State John Kerry signs a series of documents during the E3/EU+3 and Iran talks in Vienna on January 16. The historic nuclear accord between Iran and major powers entered into force as sanctions were lifted on the Islamic republic. (Photo: Kevin Lamarque/AFP/Getty Images)

We can all be grateful for the safe return of five American prisoners (please don’t call them “hostages”) from Iranian jails.  Their families should celebrate their homecoming, and we should all be thankful they’ll be able to resume normal lives, as something other than unwilling guests of the mullahs.

Even as the administration was trumpeting both their return and the implementation of the Iran deal, the first fruits of that poisoned deal became apparent.

In fact, the hostages, the nuclear deal, and a variety of other recent Iranian transgressions are all deeply intertwined—representing the success of an aggressive Iranian strategy, consistent with their contempt for international law and the state system.

In return for the release of the five Americans, the president pardoned 21 Iranians—some of whom had dual citizenship and will stay in the U.S.—involved in aiding Iran’s ballistic missile, nuclear, and cyber espionage programs.

Iran reportedly used the hostages as leverage to get the administration to drop even the minimal sanctions it had decided to impose as a result of Iran’s ballistic missile tests, which violated a number of UN resolutions.

Simply establishing a black market price for live Americans would be enough to provide a steady supply from Shiite militias, Iraqi soldiers, or other Iranian allies.

Add to that Iran’s firing of several missiles in the vicinity of US ships operating in the region, and the seizure of 10 U.S. sailors, and it is clear the administration is unwilling to make Iran pay any price for its belligerence and its violations of international law.

Yesterday, it was reported that Iranian-backed Shiite militias operating in the Dora neighborhood of Baghdad seized three Americans.

As of this writing, the Iraqi Army was reportedly searching the area, but had not yet found them.

Don’t be surprised if they suddenly surface in an Iranian prison, or if Iran or one of its regional allies emerges to intercede on their behalf right around the time of the next major Iranian violation of international law, or of the nuclear deal.

It isn’t necessary that Iran directly order the taking of Americans in order for them to benefit from it. Simply establishing a black market price for live Americans would be enough to provide a steady supply from Shiite militias, Iraqi soldiers, or other Iranian allies.

Thanks to the nuclear deal and its nearly $150 billion signing bonus, and the $1.7 billion settlement reached this week on outstanding Iranian claims against the US government, the mullahs now have the means to pay handsomely for American hostages when they want them.

Such a system would be far superior from the Iranian point of view, leaving little or no paper trail, perhaps even permitting the militias to retain custody of the hostages until the regime really needed them. Certainly it would provide enough plausible deniability for the regime’s Western apologists to fool themselves and others

The mullahs thus have the means not only to directly aid their allies, the militias, Hamas, and Hezbollah, but also to enable those murderous organizations to help themselves.  What if Hamas or Hezbollah were to turn savior by securing the release of an American hostage?  At a time when influential American foreign policy voices are calling for Hamas to be treated as a responsible party, such an act could open the door to direct negotiations with the terror organization.

Indeed, Iran need not demand money as ransom, even if it is acting on its own behalf and not through a third party.  As with the current crop of hostages, new ones could be used to blunt or avoid sanctions, or become a Get Out Of Jail Free card for otherwise provocative behavior towards the US.

Not bad, for a deal that the Iranians never signed, or ratified, and which our own State Department questions the enforceability of.

Joshua Sharf is a Fellow with the Haym Salomon Center and head of the PERA project at the Independence Institute. Follow him @joshuasharf. 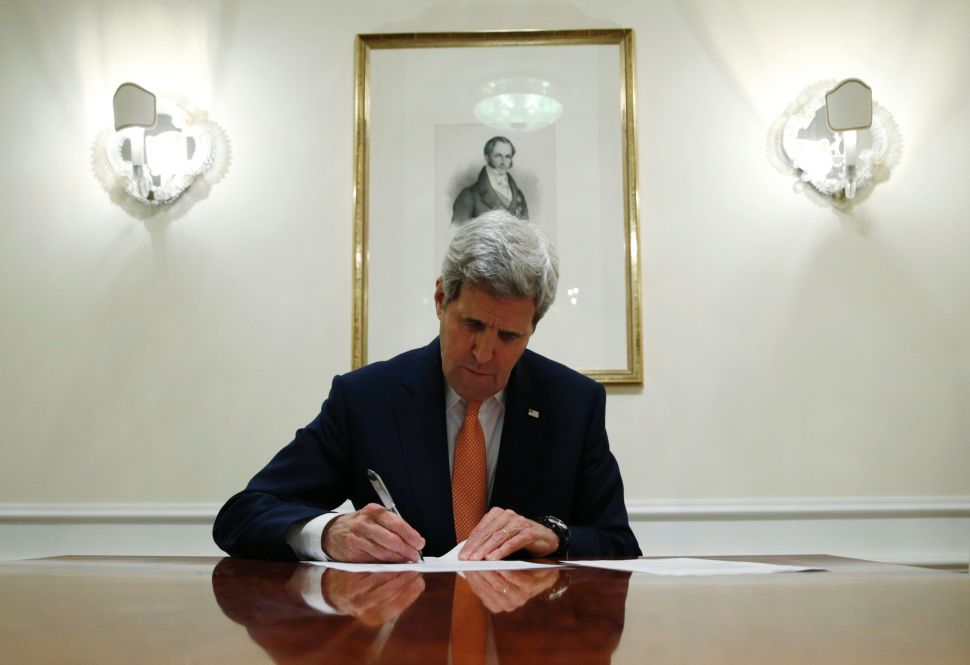