Can you figure out what happened to the ball in the above GIF?

Millions of people have been trying to solve the mystery since the clip surfaced yesterday on Reddit and Imgur.

Immediately, Internet users began throwing out theories—many serious and others jokey in nature. “It’s behind the kid’s ear,” commented one Imgur user. “He ate it,” joked another. One user who felt this case was too big for Internet investigators simply wrote, “Need Mythbusters.”

But all jokes aside, most people didn’t have a clue where the ball went. It didn’t make sense until one Reddit user posted another GIF that potentially explains the disappearance, suggesting the ball managed to stay behind the kid in the green shirt as it bounced.

It looks like we can call off Mythbusters. The Internet solved this one. 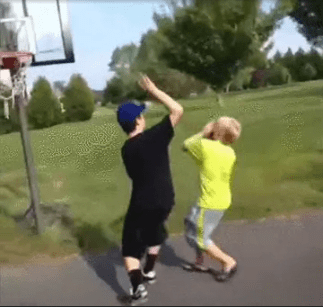