Here we go! I watched the first episode of The Magicians on SyFy like someone watching their little sibling playing t-ball. Come on, you think, you can dooooo this! You’re rooting for them with all of your heart, but at the same time, you’re hyper aware of all the mounting evidence that far from being the most gifted t-ball player since Babe Ruth’s legendary elementary school days, little so-and-so might be sort of mediocre.

But episode 2 came in like a home run – flooding me with relief that SyFy can take a world as interesting and complicated as the one Lev Grossman wrote in his bestselling trilogy and turn it into good television. The strength of the episode came mostly through it’s differences from the books – while I could spend 2000 words detailing all of the changes (some seemingly arbitrary, some significant) they’ve made from page to screen, it’s those changes that allowed The Magicians to show it’s full potential as a TV show.

While the first book stays rooted firmly in the perspective of Quentin (Jason Ralph) – the milquetoast depressive who can’t figure out why everything isn’t special for him, the show has chosen to portray his journey from overachieving bore to magical bore in tandem with the stories of the much more interesting characters around him: Julia (Stella Maeve) trying to develop her own magical abilities in the dog-eat-dog underground of backstabbing self-taught hedgewitches; Penny (Arjun Gupta) the brooding, guylinered sex dream of a bad boy who I feel slightly less guilty about objectifying in this review given the number of times they’ve shown us him with his shirt off; Kady (Jade Tailor), Penny’s boho love interest who spends her time wearing Vanessa-Hudgens-at-Coachella hippie ensembles and being a manic-pixie-badass; and Eliot, the lush of the Physical Kids clique, who with a single eyebrow raise, Hale Appleman has made the funniest and most fascinating characters I’ve seen on television in a long time.

Episode 2 focuses on the aftermath of the accidental summoning of a demon from another dimension – you know, standard sitcom stuff. Penny, Kady, Alice, and Quentin attempted to contact Alice’s dead brother for reasons that didn’t entirely make sense, and instead allowed a terrifying man-monster with too many fingers on each of his hands and a face hidden by swarming moths to step calmly through a mirror, freeze time, and go full sociopath on a classroom.

The episode was well paced, punctuated by a cinematic score and special effects that look like they should be above SyFy’s pay grade. Where the episode stumbled, ironically, were the remnants of the book it was adapted from: while the revelation of Jane Chatwin as something like Quentin’s guardian angel was a satisfying, full-circle surprise in the book, wedging her into the show this early and affording her mythical importance before establishing the lore of Fillory to begin with feels lopsided.  The stopwatch that appeared at the beginning of the episode seemed to be important based on the way it magically dissolved and had something to do with the Beast, but it’s not at all important in terms of what I’m enjoying in the show: these cool people hanging out and making quips and being attractive.

And, while the timeline of the show, at least in my mind, has had them at Brakebills Academy for all of 4 days, the kids are way too good at magic we never saw them learn. It seems like SyFy thinks of magic like soccer – something you can just sort of be good at without ever actually learning it – instead of how the books presented it, which was like having to learn how to do advanced calculus that’s somehow in another language.

Whereas the sexually aggressive finance bro jerk (David Call) who tried to downplay his attempted rape of Julia in the last episode still continued to be the personification of every Frat Guy villain in the movie where the hero is a chubby loser, Julia came into her own as a far more complex and dynamic character than the last episode gave her credit for.

Expanding beyond Grossman’s world is this television show’s greatest weapon. They don’t need to keep putting the gorgeous Alice (Olivia Taylor Dudley) in mini-dresses with Peter Pan collars like a sexy nun Halloween costume just because she was supposed to be a dork in the books. The show already made the decision to cast super hot people in literally every single role. The sooner they lean into their choice to make this magical Gossip Girl, the better. 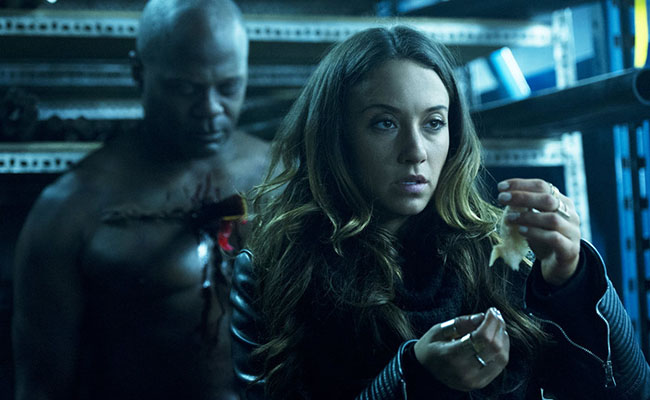