Every modern media company worth its salt has an active Internet presence—but not so long ago, the fact that a newspaper was launching a website was enough to make headlines on its own.

The New York Times launched its website 20 years ago today, and to mark the occasion the Times company has released a digital time capsule called “A History of NYTimes.com.” The capsule uses the technology of The History Project, a digital artifact site in which the Times has a minority investment.

In 1994, the Times had partnered with America Online to launch @times, a digest of the paper’s and culture stories. The interface was very basic.

So the next year, the paper decided to go all in on digital. The beta version of nytimes.com launched in October 1995, and on January 22, 1996 the website went live to the world. Naturally, Jim Romenesko was the first to notice the active site.

The print article announcing the site’s launch, and its hope “to build readership in cyberspace,” reads like an antique today: 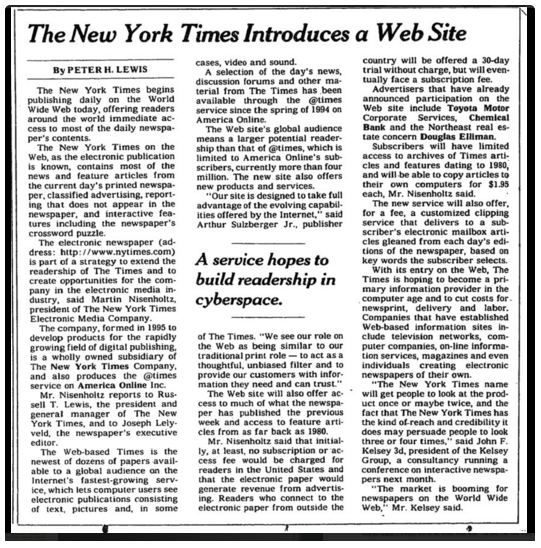 Where to begin—the unwieldy title of “The New York Times on the Web,” the promise of “text, pictures and, in some cases, video and sound,” the archive of articles “from as far back as 1980?”

To its credit, however, the site continued to “take full advantage of the evolving capabilities offered by the Internet,” as publisher Arthur Sulzberger Jr. promised.

“It’s unfortunate to say this, but most of the major spikes happen around bad news,” Martin Nisenholtz, former CEO of New York Times Digital, said in an audio interview accompanying the time capsule.

This was truly brought home to the digital team on September 11, 2001, when the website nearly crashed due to the volume of people looking for information about the terrorist attacks.

“People were turning to the website in a way they never have before,” Rob Larson, former Times director of information architecture, says in an audio interview. “You might have gone in the past to look up news,  but now you’re really looking to see if maybe somebody you know was killed in the crash.”

The Times‘ next big digital revolution was in 2006, when the first blogs and podcasts debuted on the website. The mobile version of the paper launched in 2007, followed by an iPhone app in 2008. That same year, the first live video feed of a presidential debate appeared on the website’s homepage.

In 2011, the Times realized that paywalls were the future and began to use a metered model on their website. The move has been largely successful—last October, the paper passed one million digital subscribers.

As the paper’s online distribution has evolved, so has its content. The multimedia experiments began with “Snow Fall,” a Pulitzer Prize-winning feature about an avalanche that has since become shorthand for good multimedia reporting. The Times‘ latest innovation is NYT VR, a partnership with Google Cardboard which launched in November.

The original NYTimes.com looks laughably simple now, but as the new infographic shows, it paved the way for many innovations to come. 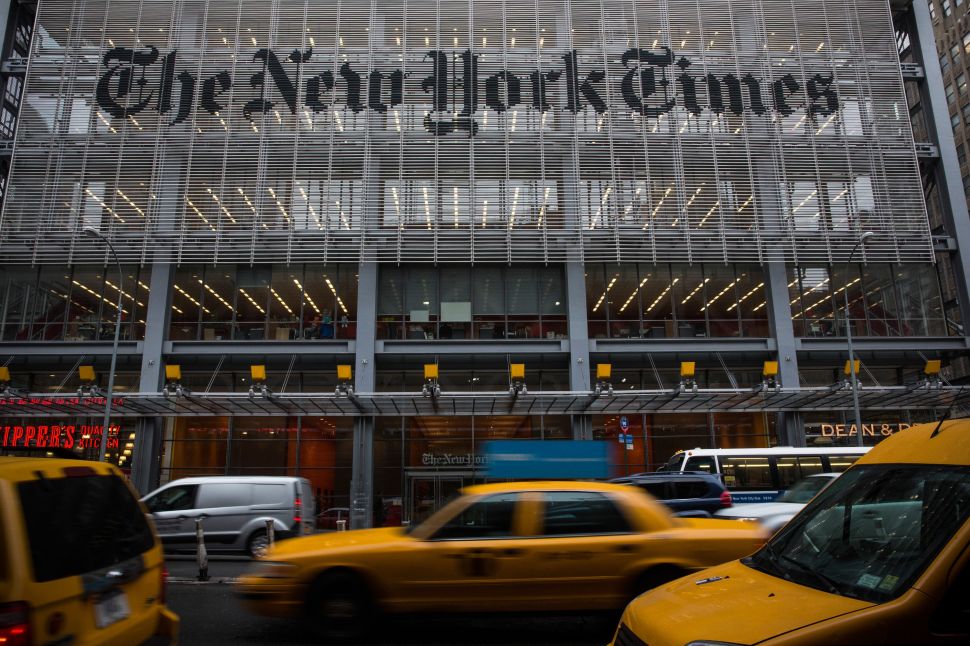