“3D TV’s Future So Bright We Had to Wear Shades,” proclaimed tech zine Engadget in 2009. They can be forgiven both the pun and the foggy forecast, perhaps, since many credible news outlets (CNN, The New York Times, Wired) that year heralded the era of 3D home entertainment as more than speculation, but the (very near) future. Looking at how movie theaters were able to capitalize in the resurgence of interest in 3D Films, media companies like ESPN and DirecTV gambled on rolling out their own 3D networks; on the hardware side, Toshiba, Samsung, and Sony invested billions in creating 3D-capable televisions. With that kind of money and momentum, it’s hard to fault the spate of articles predicting that 3D was just over our HD-rendered horizon.

Yet here we are, seven years later, in a world where virtually every blockbuster comes with the option of viewing it in 3D and/or IMAX (though hopefully not both at once, since that’s a surefire way to get the popcorn pukes), and the landscape of television is still as flat as, well…a flat-screen. So we can be forgiven for a healthy dose of skepticism when it comes to this year’s TV techo-trend: the Virtual Reality headset.

While Netflix and Hulu worked with Oculus last year to develop “virtual screening rooms”—sort of middleman service where you can effectively block out the rest of your vision to only focus on the viewing screen—the product itself isn’t particularly game changing…yet. Especially with 2016’s first big virtual reality announcement being the dizzying price tag for Facebook-owned Oculus Rift: at $599, it’s approximately the price of a 50-inch LED smart TV.

Unlike the jump to 3D—which conceptually was a no-brainer—it’s harder to fathom the point of an immersive experience in a static narrative format such as TV, where you can’t decide to leave the action of Breaking Bad to, say, explore the virtual landscape of Albuquerque’s desert meth labs. And while HBO’s Game of Thrones did offer participants at this year’s SXSW a chance to explore The Wall, Diane Tryneski, HBO’s chief digital officer, told the Observer, “The industry and audience are still getting acquainted with VR and what it means.” Ms. Tryneski added by email that “the industry (displays, compute power, motion detection, etc.) is still in the early stages of performance required for an immersive storytelling experience.”

But don’t underestimate VR. Gartner Group estimates that consumers will buy 25 million headsets by 2018…and much like your PlayStation or Xbox that can also play DVDs or download shows, expensive technology has a way of making itself multi-functional, lest it risk obsolescence.

“There are lots of uses for VR beyond immersive storytelling, and the experience of watching a traditional, 2D movie inside the headset is pretty good,” says Nonny de la Peña, an investigative reporter who founded Emblematic Group. The company uses virtual reality to transport viewers into the news, such as the middle of the Syrian Civil War. Emblematic has produced VR content for the Samsung Gear VR headset launch and collaborated with TV networks including BBC and Al Jazeera America. Ms. de la Peña pointed out that the crucial distinction might not currently be in VR’s  ability to create a new world for TV so much as being able to block out surrounding stimuli, so the experience is more like watching a film in a dark theater than checking your texts and email while watching Scandal. Ms. de la Peña also pointed to VR players like Sony Morpheus, HTC Vive and the aforementioned Oculus Rift, which will be able to tap into pre-existing markets by teaming up with PlayStation, Steam and Facebook, respectively. When it comes to VR in home entertainment, Ms. de la Peña argued, “I don’t think there’s a single media company that can afford not to invest.” 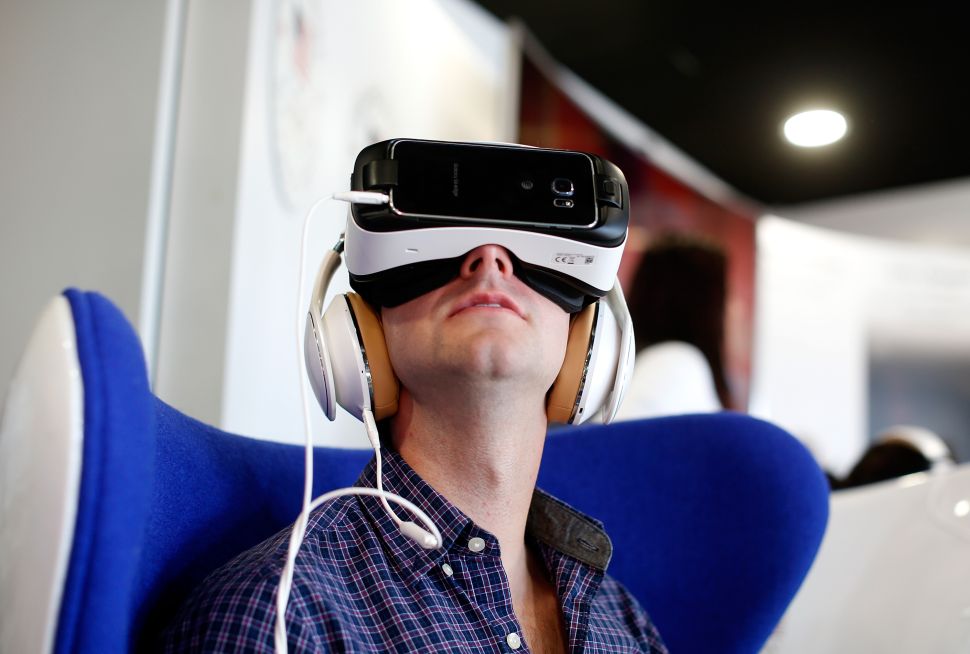