When it came time to protect United States, America’s Arab allies and the State of Israel against the threat posed by Iran, Rep. Jerold Nadler chose party loyalty over the national interest. He was one of the sad examples of a member of Congress who took his supporters for granted because he is confident his seat is safe. As the warnings of the critics of the Iran nuclear deal are shown to be correct with each Iranian violation of the world’s trust, Nadler’s vote becomes more troublesome as it becomes more evident he has joined the president as an enabler of the world’s most dangerous and despicable regime.

Nadler’s latest effort to rationalize his position appeared in an op-ed in the December 29th edition of the New York Jewish Week. Once again, like others who caved into the pressure from the White House, Nadler admits that the agreement is flawed, that “Iran will remain a major menace to the region and the world,” and that “even without nuclear weapons, a nuclear armed Iran would represent an unacceptable threat to the United States, to Israel, and to global security.”

Nadler repeats Obama’s line that the nuclear deal was not meant to address “Iran’s continuing sponsorship of terrorism and human rights abuses, the instability it spreads across the region, and the explicit threats it continues to make against the United States and Israel.”

In addition to holding the Americans hostage, Iran solidified its record as one of the world’s worst human rights abusers by executing more than 700 people (the final figure for 2015 may exceed 1,000).

Like Obama, Nadler fails to understand that the nuclear negotiations gave the world leverage over the Iranians on those issues if they had not been set aside as less important. Obama, with Nadler and other Democrats’ support, also jettisoned our longstanding policy of not negotiating with terrorists and allowing Iran to once again kidnap American citizens without fear of retribution. It is particularly outrageous that the president signed the Iran deal and left four Americans — Washington Post journalist Jason Rezaian, former U.S. Marine Amir Hekmati, pastor Saeed Abedini and former FBI agent Robert Levinson – captives of Iran.

In addition to holding the Americans hostage, Iran solidified its record as one of the world’s worst human rights abusers by executing more than 700 people (the final figure for 2015 may exceed 1,000). In addition, since signing the nuclear deal, Iran has continued to support terrorists such as Hezbollah, escalated its interference in the internal affairs of the Gulf States and intensified its military intervention in Syria.

Worse, because Obama is determined to stick to the agreement no matter what Iran does, the Iranians have turned the president into a hostage to his “legacy.” Any effort to rein in Iran’s abuses are met with threats from Tehran that the Iranians will renege on the deal. Thus, just this week, when Obama was supposed to announce new sanctions because of Iran’s violation of the UN’s prohibition on missile tests, he backed down when Iran called his bluff and threatened to increase its missile research and development.

Nadler’s response to Iran’s missile tests was even more Orwellian. He said that “Iran has demonstrated why it cannot be trusted,” but doubles down on support for the nuclear agreement, which Iran is equally likely to cheat on. In fact, he even cites the International Atomic Energy Agency report that confirmed that Iran “lied about its ambitions, and, until 2009, actively sought to develop the technology for nuclear weapons.” What Nadler does not mention is that the IAEA failed to fulfill one of the goals of the negotiations, which was to resolve outstanding questions about Iran’s past research, especially regarding the facility at Parchin, which was believed to be used for nuclear weapons development.

Another of Nadler’s rationalizations for supporting the nuclear deal was a letter of assurances from Obama that he would “take steps to ensure we and our allies and partners are more capable than ever to deal with Iran’s destabilizing activities and support for terrorism.” Obama also pledged to “enforce international and U.S. law, including sanctions related to Iran’s non-nuclear activities, and to keep Congress fully informed of all aspects of Iranian compliance with the agreement.”

Nadler ignores the fact that Obama has made clear that he sees no role for Congress in addressing Iran’s nuclear program.

Nadler ignores the fact that Obama has made clear that he sees no role for Congress in addressing Iran’s nuclear program. Rather than submit the agreement to Congress as a treaty, as he should have, Obama circumvented Congress with the help of Senate Democrats. There is no reason to expect him to pay attention to Congress now, beyond ensuring that no legislation to address Iran’s non-nuclear misbehavior is allowed to upset the Iranians and threaten the sanctity of his deal.

Hypocritically, Nadler says that “failing to take punitive action when international laws are broken is an abuse of our institutions and of the shared responsibility to stand up to bad behavior,” when he knows that Iran’s routine flouting of international laws and norms will not be punished for fear of provoking Iran to cancel the nuclear deal.

Nadler can still salvage his integrity by speaking out against the violations, moving to delay the suspension of sanctions unilaterally decided by President Obama, and insisting on the imposition of new sanctions for Iran’s continued support for Terrorism and brazen violations of UN resolutions regarding ballistic missile tests.

If, however, Nadler continues to insist on closing his eyes to the Iranian danger out of fear of offending Obama, an effort should be made to recruit and finance a candidate with an appreciation of his or her constituents and the national interest to challenge him. This would also send an important message to other Democrats who have taken the support of pro-Israel Americans for granted and demonstrate that we are prepared to look for alternatives to those who betray us. 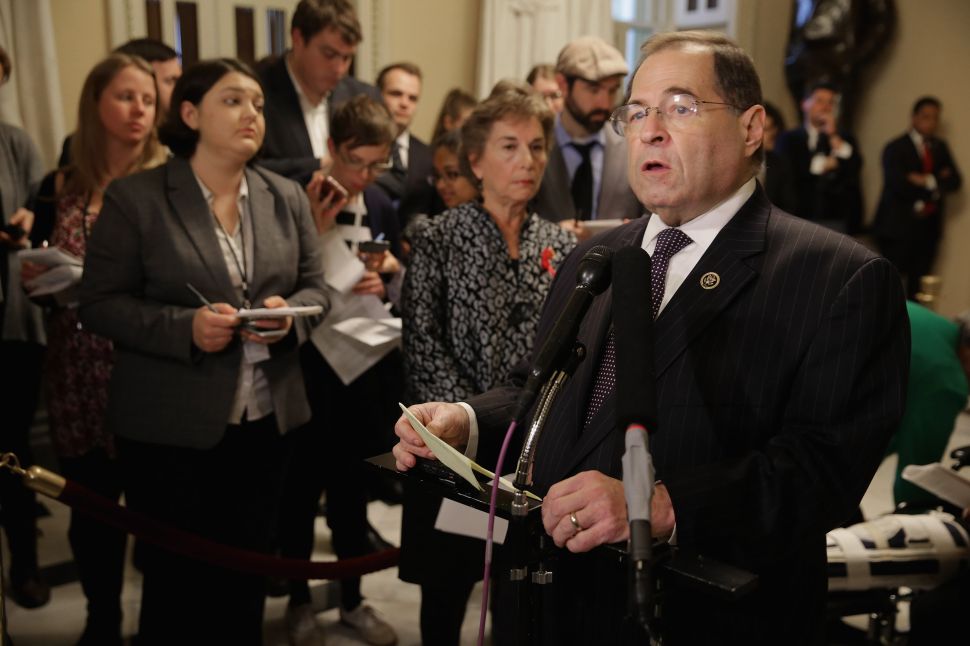