On Friday afternoon, hours before New York City’s largest and most controversial tax break was set to end at midnight, some were acting like the city was bracing for a nuclear blast.

Leaders of the Real Estate Board of New York and the Building and Construction Trades Council of Greater New York didn’t even wait until the official deadline before they conceded the 421a tax program was over.

REBNY and the construction workers unions needed to reach a deal on construction wages to preserve the 44-year-old, $1-billion-a-year property tax exemption. All last week, real estate pros were panicking that the once-unthinkable was happening right before their eyes.

Indeed, how could a four-year extension of 421a passed in Albany and championed by Mayor Bill de Blasio get tossed in the trash? The mayor professed hope until the end, telling reporters last Monday, “There’s time on the clock.” But the prospects looked grim. Anonymous persons close to the REBNY-Building Trades talks had been whispering gloom for months.

The 421a program is referred to by both its backers and its critics as a developers’ tax break. The property tax exemption of up to 25 years goes to residential builders and owners in exchange for affordable housing in certain parts of the city, and the new law would have expanded that requirement to all new residential projects citywide.

Yet the same new law pronounced itself void if REBNY and the unions didn’t find common ground on prevailing wage rules for 421a-aided projects. The tax break, which usually gets extended every four years, expired in 2010. But state lawmakers reinstated it for four years six months later (after renewal was set to start in 2011, it got a brief extension in June, but only through 2015). And almost immediately after last Friday’s talks blew up, the only question for the real estate community was how to get it back.

Real estate leaders, the abatement’s many vocal opponents and elected officials on both sides of the issue now must brace for the impact of another lapse. The 421a tax break involves the city’s history, its politics and its economy. The tax break started in the 1970s at a time when some worried whether anyone would want to build new housing in the city. The current impasse between REBNY and the Building Trades Council comes with some concerned the demand for new housing in the city will push everyone but the very wealthy out.

READ MORE IN THE COMMERCIAL OBSERVER 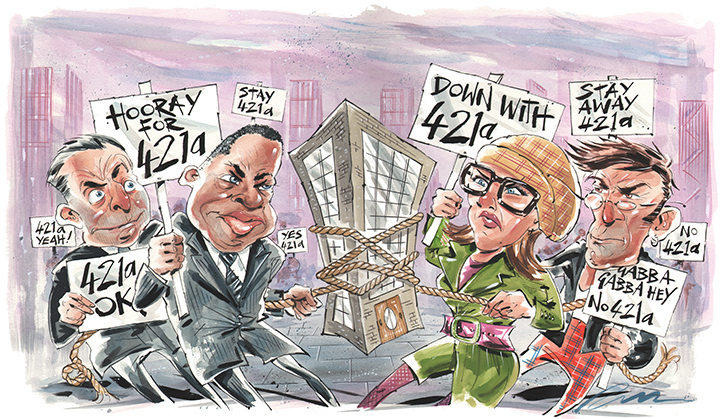