Award season is upon us, ladies and gents, starting off with the always fun Golden Globes. And by “fun,” I mean ughhhhhhhhhh. After three hours of drunkenness, casual transphobia with a side of racism, and Jeffrey Tambor having none of it, we’ve emerged with a list of winners led by the worthy (Mr. Robot!), the sorta-baffling (Mozart in the…Jungle?), and the inevitable (Leonardo “Silver Medal” DiCaprio wins another Golden Globe).

As we often do here at tvDownload, I’m going  to do away with the actual results, take a step back, and look at the real winners and losers of the 2016 Golden Globes. Grab your favorite brand of raw bison liver, settle in with your crazy ex-girlfriend , and keep that hand on the censor button because it was a long, long night at the Globes.

LOSER: Ricky Gervais. I decided to use this year’s Golden Globes as a “am I sick of Ricky Gervais’ schtick?” test, and the results came back more positive than the breathalyzers outside the Beverly Hilton. Honestly, you can only really come in as the “outsider that takes on Hollywood” once, maybe twice. When you come in for a fourth time with your dated Charlie Sheen jokes and your easy, EASY Bill Cosby material, it’s more annoying than it is controversial. At this point, taking on Mel Gibson is like sticking a fish on a hook and calling it fishing.

WINNER: Censorship. This might require some extra research, but last night’s Globes may just have been the very first awards show presented 50% on mute. I swear there were two or three moments where NBC’s censor just fell asleep on the mute button. Channing Tatum is handsome, sure, even if his new haircut reminds me of the guy that sells spike wristbands at the mall, but I don’t need to watch him and Jonah Hill mouth a bit that’s probably not that great even with sound. Don’t hype your controversial guest, don’t create a faux-buildup to his introduction of Mel Gibson, then censor the entire follow-through. We’re all adults here. If your child is watching the Golden Globes, then they are the kind of child who has already heard the phrase “sugartits.”

LOSER: Films Winning Awards for Genuine Reasons. Let’s take a quick look at the victors in the two big movie categories; The Martian for Best Comedy, and The Revenant for Best Drama. I will pay actual cash money to the person who gives me the reason The Martian was nominated as a comedy other than the Hollywood Foreign Press wanted to give it the prize, but felt bad for not also giving something to The Revenant. It’s unnecessary. There’s enough white men in The Revenant for Matt Damon to be okay losing to it.

Speaking of The Revenant…does anyone else not give a shit how hard it was to make The Revenant? The cinematography looks beautiful so, sure, give Best Director to Alejandro González Iñárritu (hell, give him the Oscar two years in a row). But is a movie really the best drama of the year because it was unpleasant to make, and therefore the results are really, really unpleasant to watch? And did we all forget that a batshit crazy Australian took some futuristic junk cars out into the desert and blew them the hell up for real, and then spent zero time harping on how difficult it was? Oh, “boo hoo we had to wait for natural sunlight.” Just…look at this:

WINNER: Every TV Show You Didn’t Expect. Like or love it, for better or for worse, the majority of this year’s TV Golden Globes were absolutely shocking. In some cases, it’s a breath of fresh air. Mr. Robot crawled from the depths of the USA Network using Suits and Burn Notice as stepping stones to become one of 2015’s most dynamic, compelling series. Ditto for Mr. Robot the character, AKA Christian Slater. And though its ratings are in the dumps, Crazy Ex-Girlfriend is an absolute delight, a fact many non-believers should be sold on based only on Rachel Bloom’s acceptance speech.

And then…Mozart in the Jungle. Mozart. In. The. Jungle. Look, there is nothing wrong with Mozart in the Jungle. It is a perfectly fine little thing, especially if you’re super into flutes. But it was NOT the best comedy series of 2015. Over Transparent AND Veep AND Orange is the New Black? Gael García Bernal is fine. He’s just fine. He is a plain bagel, untoasted. But, like, even if we’re not going to give it to Jeffrey Tambor, didn’t anyone binge Master of None?

And even among my absolute bafflement…I don’t hate it. Hey, as the host himself reminded us over and over (and over), this shit doesn’t matter. In a world where we send Jennifer Lawrence a new golden statue weekly simply for existing, why not keep it interesting?

LOSER: Lady Gaga. No really, all jokes aside she actually deserved to win for American Horror Story (go figure) and her speech was super gracious and all that. But LOL FOREVER to this

Leo will take on a bear, but perhaps not a pop star #GoldenGlobes https://t.co/5CKjNAeK6v

WINNER: Quentin Tarantino (in the mind of Quentin Tarantino). Oh, not to say Quentin Tarantino won any category HE was nominated in. But it was nice of the director to transform the acceptance speech for legendary composer Ennio Morricone’s Best Original Score victory into prime Tarantino time, baby. Thanks for rescuing us from the absolute poverty-ridden ghetto that is anytime you are not speaking, Mr. Tarantino.

LOSER: The Golden Globes, for even existing on a night, in a world, where a dude like David Bowie died, a presence who effortlessly displayed more coolness and grace than that entire Globes ballroom combined. And he never even had to eat a bison liver to do so (but he totally would’ve looked awesome doing it, had he decided to). 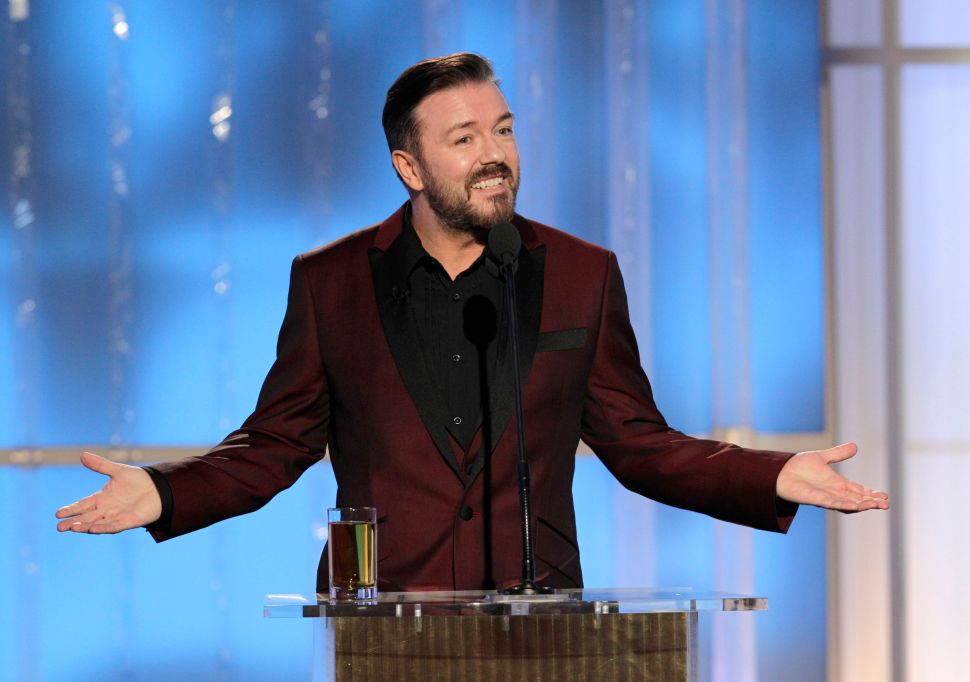