Everyone grows up. There is no Peter Pan who will save us from the inevitable, but the good news is that, if you so choose, you can re-experience childhood through fresh eyes, as a parent.

Agathe Snow grew up fast as the wild child bride of the late hellraising artist, Dash Snow, but now—nearing 40 years of age and with a 5 year old—the artist lives a very different life to the one she experienced as part of a high-profile group of mid-aught art scenesters described in New York Magazine as “Warhol’s Children.”

But despite her early reputation as a carouser, Ms. Snow is now considered a serious artist amongst her peers. Ever since her memorable breakthrough show at James Fuentes in 2007, (centered around an enormous bricolage sculpture of a whale carcass), Ms. Snow has proven to be an imaginative sculptor; one who often references the raw and seedy side of her youth through a provocative materials that range from latex breasts to old beer cans.

But these referents of late-night play have given way to symbols of early morning play in “Continuum,” her first show at The Journal Gallery in Brooklyn, up through January 10.

Seeing The Journal Gallery’s cavernous space completely filled with Ms. Snow’s lively wall reliefs and precarious free-standing sculptures—some of which rise over 15 feet in the air—is exciting in and of itself, but a closer inspection reveals an artist with a sophisticated eye.

Ms. Snow’s predominant style for this show, a black-on-white linear vivisection of assemblages (that occasionally wanders a bit too close the aesthetic of Art Brut mastermind Jean Dubuffet’s popular public sculpture), finds a balance between the studied elegance of early Modernist sculpture (think Picasso or Calder) and the slapdash freedom of children’s paper maché projects.

So how does an artist with a talent for line and form and an interest in the childlike not reference these watershed Modernists? Ms. Snow’s answer seems to be hinted at in her show title, which reads as a proclamation that an infinite continuation of such art ideals is not only acceptable, but should be considered the truer way forward.

A variety of sculptural styles populate the exhibition (including a shiny, towering sculpture that could have coronated a New York City bookmobile in the 1970s or 80s), but it’s her quixotic wall reliefs that ultimately steal this show.

While these wall works shouldn’t be mistaken for traditional abstract paintings, in which harmonious colors seem to visually animate or propel each other through contact, Ms. Snow nonetheless creates an interesting spatial dichotomy between her flat, bright shapes and the abstracted topographies of her daily life.

In works like Just Hold On, 2015, an abstract conglomerate of curvy animal-shaped pool toys, gridded BBQ grill tops and hula hoop parts, overlay the artist’s coarse black lines as well as a floating array of brightly colored shapes. This is also evident in Hypothalamus, 2015, which adds the gentle curve of a windsurf boom and the patterned rigidity of everyday pegboard into the mix with an abstracted animal toy, as well as in Horse Power, 2015, a swirling mishmash of parts that utilizes the the joyful colors of hula hoops to full effect.

Again, the idea of an uninhibited artist becoming enamored with all the art and aesthetics of childhood is not new; MoMA’s tremendous Picasso sculpture show is proof enough of that. But Ms. Snow confirms that even a decidedly central foundation of Modern art can be revived with a skillful and inventive use of material, not to mention the ability to fearlessly offer your reality to the viewer—whether that reality is dive bar—or Babar. 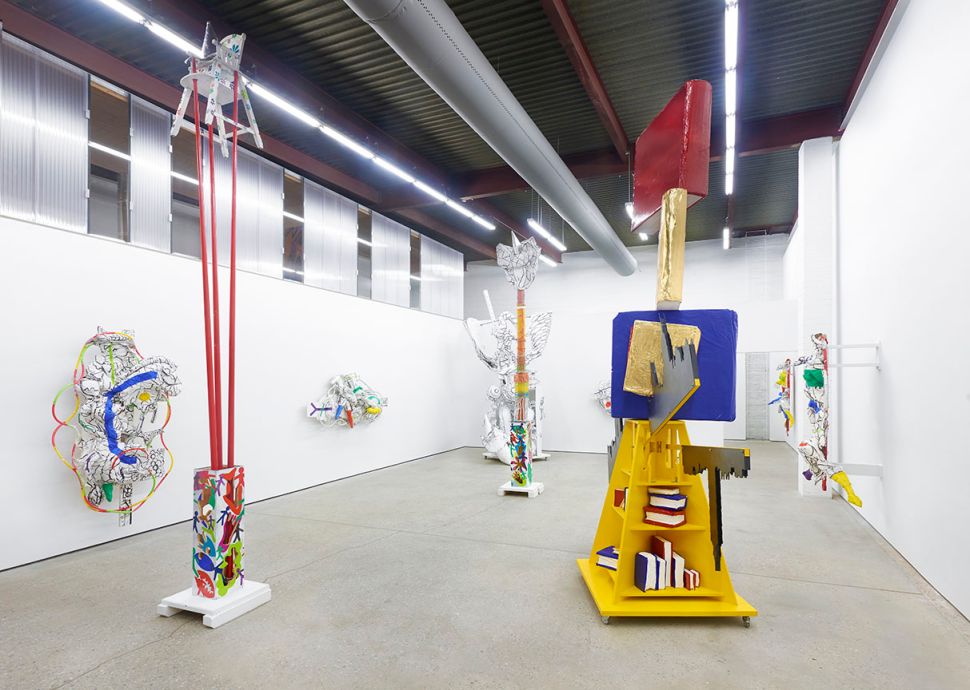