When the Whitney Museum of American Art closes its fine exhibition on the works of so-called ‘Harlem Renaissance’ painter Archibald J. Motley, Jr., this Sunday (Jan. 16), not all the works will be going home to the museums or collectors who loaned them.

The Whitney has just announced that it has acquired, from the artist’s family, Gettin’ Religion, a 1948 work. The price was undisclosed. The painting will go on view on the museum’s seventh floor, with its permanent collection, and is the first Motley work in the collection.

The gifted artist, though ironically associated with the Harlem Renaissance, never lived there and painted mostly scenes of Paris and of Chicago, particularly the neighborhood of “Bronzeville.”

As described in the museum’s statement: In the painting, “the street bustles with characters including amorous young couples, the elderly, musicians, and children. A wooden house on the far side of the street is bracketed by an apartment building and a market; from the windows and porch the residents voyeuristically regard the parade of life in front of them, mirroring the viewer’s perspective. Motley fuses this vivid narrative with coloristic invention; he bathes the nocturnal scene in blues and purples and the cool light emanating from an electric lamppost is echoed by the stars that dot the indigo night sky.”

In 2015, many museums beefed up their collections of art by African-Americans, which for some institutions had been a neglected collecting category. Prominent purchases were made by the Brooklyn Museum and the Crystal Bridges Museum of American Art, among others. 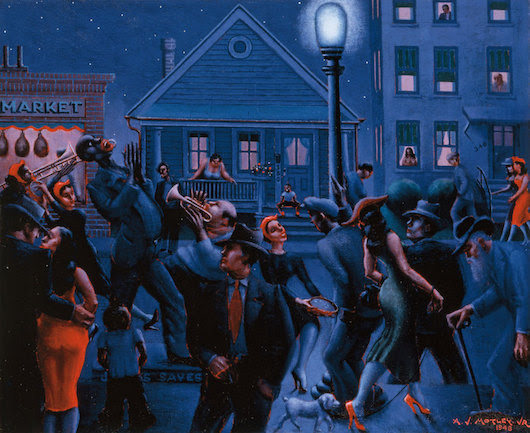