The X-Files was a beloved cult show. For the new mini-season, we received so many requests from writers wanting to recap the iconic Fox series that we decided to hand off each episode to a different Lone Ranger/X-Files enthusiast.

Not before we took a stab at the premiere, though. After all, we are expertly qualified.

Vinnie “Spooky” Mancuso: I suppose the opening montage of grainy video and polaroids was designed to catch us up on what’s happened since The X-Files ended in 2002, but it only brought to mind two things for me. 1) Why did they have David Duchovny do the voice-over after he just woke up from a nap? and 2) WHO TOOK ALL THESE PICTURES? Did Mulder and Scully have a photographer covertly following them around documenting their original-season adventures/private tender moments? Who not only climbed down into a New Jersey sewer to snap a candid shot of the Shit Monster from “The Host,” but took the time to have it developed? Didn’t the guy behind the counter at Walgreens have any questions about this? 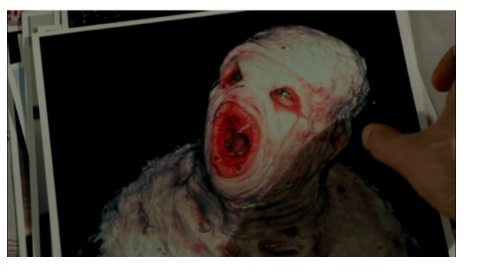 Wait, looking at them again I’m realizing all these photos are legitimately what you see if you go on FOX’s media relations site for The X-Files and click on “Episodic Images.” How deep does this thing go? Does The X-Files TV show exist in the universe of The X-Files? Or is it the other way around, are the X-Files just a real thing and the show is a cover-up? ARE WE, THE VIEWER, PART OF THE CONSPIRACY? I hate hyperbole, Drew, but literally this was me during the opening montage.

Dr. Special Agent Drew Grant: Vinnie: listen to yourself. Do you know how you sound? Arguing the authenticity of The X-Files as both a television show AND a tenuously believable government agency is paramount to treason. You and your conspiracies.

That being said, what a long-winded intro! Half of this episode (the half where Mulder and O’Malley monologue about anything) sounded like the adults in Charlie Brown. Like there’s just footage of Bush, big explosions, alien spaceships overlaid with a score of Wah-wah-wahmp-waaaahmp.

I want to believe…that I ever watched this show to pay attention to the conspiracy theory/alien plot, but in truth, I might have always been a “monster-of-the-week” gal. Sorry, I’m being called away to research the timeline of this show’s mythology, and also to prep for surgery (which I am very good at).

V”S”P: So what have Mulder and Scully been up to? Well Scully became a surgeon’s assistant and is busy attaching ears to Navajo children born without them, possibly as penance for this racist episode of The X-Files. Mulder spends most of his time watching Youtube videos only slightly related to alien conspiracies, like the time Barack Obama was on Jimmy Kimmel Live and Kimmel brought up Roswell. Come to think of it, Kimmel did the same thing when Bill Clinton was a guest, too. Which is actually pretty suspicious, because according to some articles I skimmed the Clintons signed some sort of pact with aliens in 1996. Jimmy Kimmel just seems a little…too…interested. 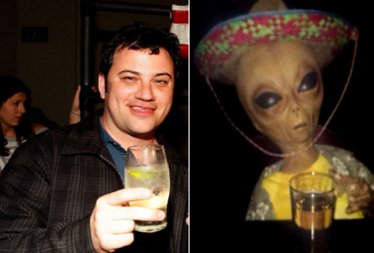 Dr. DG: That’s…that’s implausible, Vinnie. Just as implausible as a popular “internet show” having a full stage studio and worrying about “ratings.” Popular web shows that give you free limos and helicopters…they just don’t exist. Especially not for libertarians who misidentify as “conservative.”

V”S”M: The big crux of this new-and-improved(?) X-Files is this: grand conspiracy that drove the show’s first seven seasons? Wasn’t aliens. In fact, as a wise scholar once said, it’s people. Mulder and Scully have been manipulated for basically their entire professional careers, led to believe little green men were plotting in the shadows but it was actually…the government! (Or something!) Guiding us along Uber-conservative talk show host Tad O’Malley (aka Jeff Winger in a suit), who is apparently able to get much closer to “the truth” than Mulder has in 10 seasons AND two movies. I mean, dude straight casually built an alien spaceship in his spare time.

…….Wait, wait wait wait. Go back, right now, and watch the scene with the spaceship. Tell me it doesn’t make the “24 clock-ticking sound” as soon as it turns on. 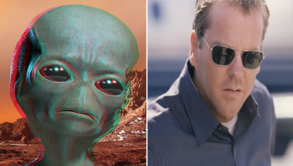 Dr. DG: O’Malley’s whole shtick doesn’t pass the smell test. (But damn, who can turn down that sweet, sweet, definitely now doomed Joel McHale ass?) Tell me what YouTube show this sounds like: “If you own a registered firearm, you will actually be targeted as an enemy by your own government in the likely imposition of martial law…now, here’s a human interest story about a nice lady putting ears back on kids!”

The only answer that makes sense is that these characters all exist in a parallel universe very close to our own, but one in which Google doesn’t exist, and when you open a browser you have two options: DrudgeReport’s homepage or everyone’s favorite universal search engine: Finder Spyder. 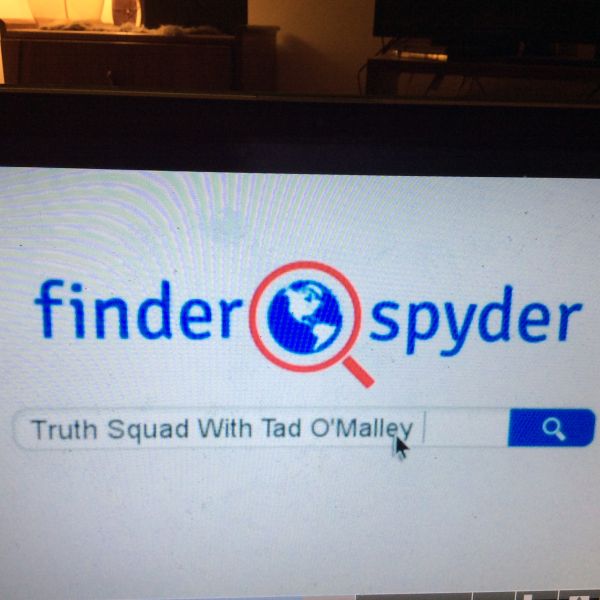 But of course…that makes no sense at all. So the only rational explanation is that the government is behind everything. No d’uh. Website malfunction? That’s the government! Wikileaks! Snowden! It must be hard catching all these OG X-Files fans up on the latest conspiracy trends. Especially in a world where you could just go check out r/spacedicks.

V”S”M: Mulder goes to meet with…that one scientist from Roswell, in an attempt to verify his brand new conspiracy theory. “You said,” Mulder cries, “that if I ever put the pieces together you would confirm.” As a lifelong jigsaw puzzle enthusiast I understand the frustration of putting the pieces together to form a clearer picture; with Mulder it is the connection between a shadowy government, extraterrestrials, and all of mankind, with me it’s that fucking corner piece I always, always lose right before I’m done. Always. Every time. Almost as if someone…is…hiding them…..on purpose. Wait, wait wait wait…
JIG SAW PUZZLES = ALIENS, CONFIRMED?

Dr. DG: That Roswell guy is definitely…someone…from before. I mean, not just in the flashbacks. He was definitely a part of the show’s larger universe, but not in the Syndicate or the Lone Gunman or Deepthroat’s replacement. Who is he? And when we figure out the answer: 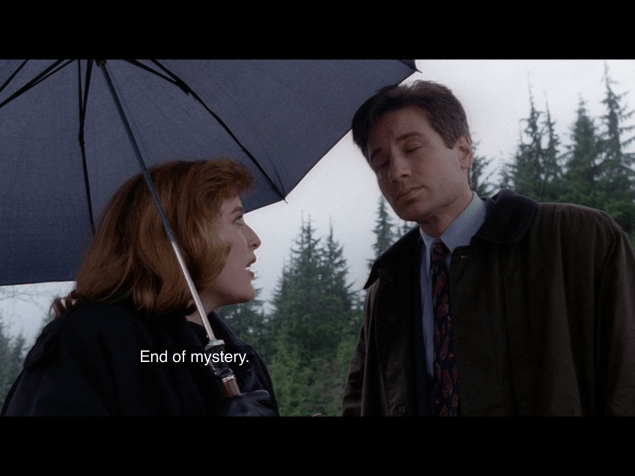 V“S”M: I think my favorite scene of the episode was when Mulder and Scully stood on the porch and just screamed the word “believe” at each other over and over. How genuinely annoying was that? Was Chris Carter afraid he’d forget the thesis of the show he’s been overseeing for 22 years?

“I want to believe.” “You DO believe!” “I only believe you believe!” What was up with that? It reminded me of that weird R. Kelly song “I Believe” that was also awkwardly a tribute to Obama…….Wait. Wait wait wait. 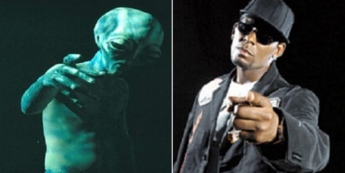 Dr. DG: I also like how Scully keeps describing her relationship with both the X-Files and Mulder as “intense.” That is such a classic Scully burn. Like, more intense than this, Dana?

Also, of course Scully immediately gets courted by the first human sentient being that is not Mulder, and then he is with her every second of the episode. I mean, I know she puts ears back on kids and all, and has an awesome ex-partner who is around all the time being really “intense” about their secret child, but who WOULDN’T want to tap that?

V”S”M: So where do we leave off? Well, first off, Scully may just have some alien DNA, and since watching Making a Murderer in one sitting made me a registered CSI detective I know DNA testing is always 100 percent legit. Too bad no one will ever know, because Sveta is blown off the road, Tad O’Malley’s spaceship is similarly destroyed by shady men in big black cars, and Tad himself has either been eradicated, or was a full-of-shit government pawn the entire time. Hmm. Full of shit. Full….of shit. 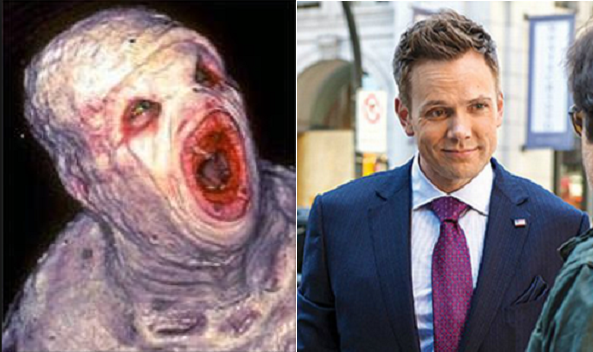 Dr. DG: Wait, in an ironic reversal of tropes, I need to know more about this case! Like: okay, so we definitely proved there was AN alien, at least one time? That’s like, huge. Mulder can just regular believe now, instead of just WANTING to! (Even though, like a belief is just a conviction, and you either have those or you don’t, so wanting to believe is kind of a redundant phrase, considering how much of his life Mulder has spent on supernatural stuff.)

But that alien just provided a smoke screen (Roswell?) for the vaster government conspiracy of using alien technology to give LA a drought and make us all into mindless consumers? Also, they use alien DNA to inject into people? How does mapping your genomes determine if you are alien or not? Especially if you were made an alien by the government?

Are there currently aliens, or was Sveta blown up in classic military explosion style, using a spacecraft? Because that car seemed to detonate the same way the spaceship in the O’Malley’s locker did after the military put a timer bomb on it.

Was Sveta ever abducted? Was Samantha? Wait, didn’t they find Samantha? Or shit, that was just CLONE Samantha. I forgot about the clones. Is Scully also a clone? Is Zach Galifianakis, in this trailer for Baskets?

Also, Mulder’s mid-life crisis. Can we discuss that? Because it doesn’t take a mind-reading alien genome’d super person to glean that Mulder and Scully used to be a thing. (But they had a baby together? Was it an alien baby? Does it have ears? Where is it? Was this part of the movies?) Did they get married? Are they divorced? Why would a conspiracy theorist with manic depressive tendencies even be ALLOWED into the FBI? And why would he continue to work there?

So many questions. All I can hope, Vinnie, is that the truth is squad-ed. Also, we should probably find out where we put that baby. 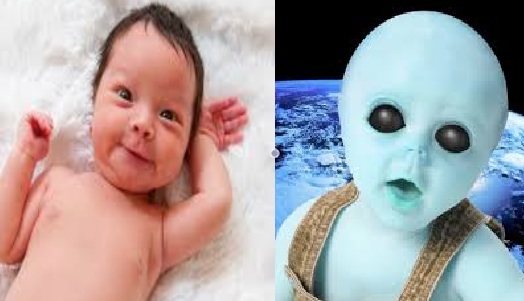 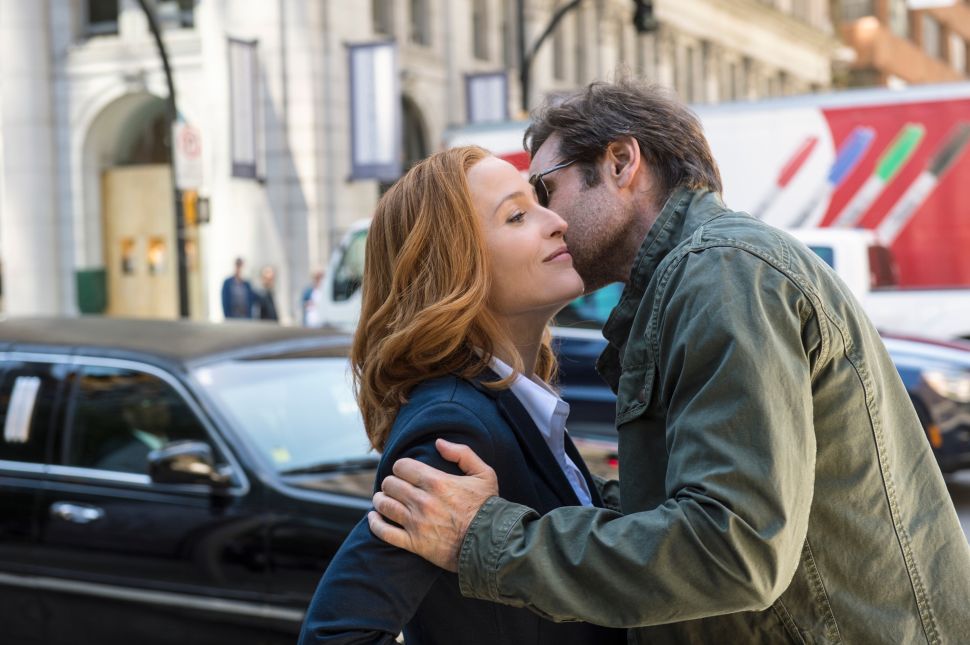