What if presidential candidates had to spend six months begging for votes in Times Square, Hollywood or the Alamo?

If Lyle Larson had his way, that’s what would happen in the next presidential race.

Mr. Larson, a Texas state representative, is spearheading a quixotic effort to set up a system of rotating first-in-the-nation states, so Iowa, New Hampshire and South Carolina are eventually ditched in favor of larger, more heterogeneous states like Texas, California and New York. The dream is for presidential candidates to spend a greater amount of time wrangling with issues that matter to larger populations, and getting primary votes in many states to actually matter for the first time in decades.

“They don’t have the diversity in population,” Mr. Larson told the Observer in a phone interview, speaking about Iowa and New Hampshire. Both states will vote early next month.

“They don’t have both the agricultural and the industrial and some of the complexities that come from having big cities,” he added. “They don’t have the issues big states have. It doesn’t make sense that we continue to follow this process when a rotation serves citizens across the U.S.”

Mr. Larson took particular umbrage at Iowa forcing candidates to take positions on ethanol subsidies, which he argued adversely impact industries and economies elsewhere. Though support for subsidies among the leading candidates is not what it once was (Iowa front-runner and Texas Sen. Ted Cruz rejects them), Iowa voters are still forcing candidates to reckon with the issue.

Other issues that have dominated the cycle, like illegal immigration, matter more to Texans, Mr. Larson said, because the state shares a border with Mexico. He also said Iowa and New Hampshire haven’t motivated candidates to properly grapple with the Environmental Protection Agency’s efforts to reduce greenhouse gases, which are deeply unpopular in Texas and other states where coal is produced in large quantities.

The fact that Texas, usually voting when a single candidate is close to locking up the nomination, may matter more than it has in a while does not make Mr. Larson feel much better. Voting with a bevy of states on March 1 in what is colloquially known as the “SEC primary,” Texas’ 155 delegates could help determine the Republican nominee. Given the number of strong candidates in the field, more may survive beyond the historic firewall of South Carolina than in past cycles.

But the Lone Star State, like New York (which may be relevant when it votes in April), will still not get a whole lot of attention on the campaign trail, with candidates scrambling across the country for votes.

“We’ve still spent six months in Iowa, New Hampshire and South Carolina,” he lamented. “The attention is drawn to the people in those states. The rest of the country really doesn’t matter … they’ll do a cursory campaign around our state.”

Mr. Larson introduced a bill in the Texas legislature last year to set up a “wheel rotation” of voting: in different cycles, different states would go first, with a potential mix of large and small. Ultimately, it will be up to the Republican National Committee to pressure states to change the dates of their primaries and caucuses, but individual states have aggressively resisted forgoing their advantageous positions. After Reince Preibus, the chairman of the RNC, suggested that he was open to changing the primary calendar in the future, New Hampshire officials said they wouldn’t budge, pointing to a state law that mandates their primary occur at least seven days prior to a “similar” election in another state.

The existential threat Mr. Preibus poses for an early voting state is clear. The Iowa caucuses have marked the beginning of both parties’ nominating contests since 1976, the dawn of the modern primary era, and New Hampshire has hosted the first primary for almost 100 years. South Carolina has traditionally been the gateway to the South.

In the cases of Iowa and New Hampshire, Mr. Larson’s criticisms have been leveled elsewhere. Both states are relatively small, largely rural, and overwhelmingly white, unlike an increasingly urbanized, diverse America. Each has a mixed track record of picking eventual nominees, with Iowa whiffing on the GOP side in 2012 and 2008. While New Hampshire’s independents are more representative of the nationwide electorate, registered Democrats and Republicans in Iowa skew far right and left; self-identified socialists and evangelicals make up large chunks of both electorates.

There are advantages to beginning the nominating process in those states, however. Presidential candidates must speak to voters in intimate town halls and forums, fielding individual questions instead of hiding behind TV ads and surrogates. It’s a rustic form of democracy many political observers don’t want to ditch.

But Mr. Larson, who has sent letters to chairs of Republican parties in most states, wants the candidates to get out of the Iowa cornfields and New Hampshire woods—and maybe out onto Broadway.

“Each one of us should have the opportunity to be in the first or second division,” he said. 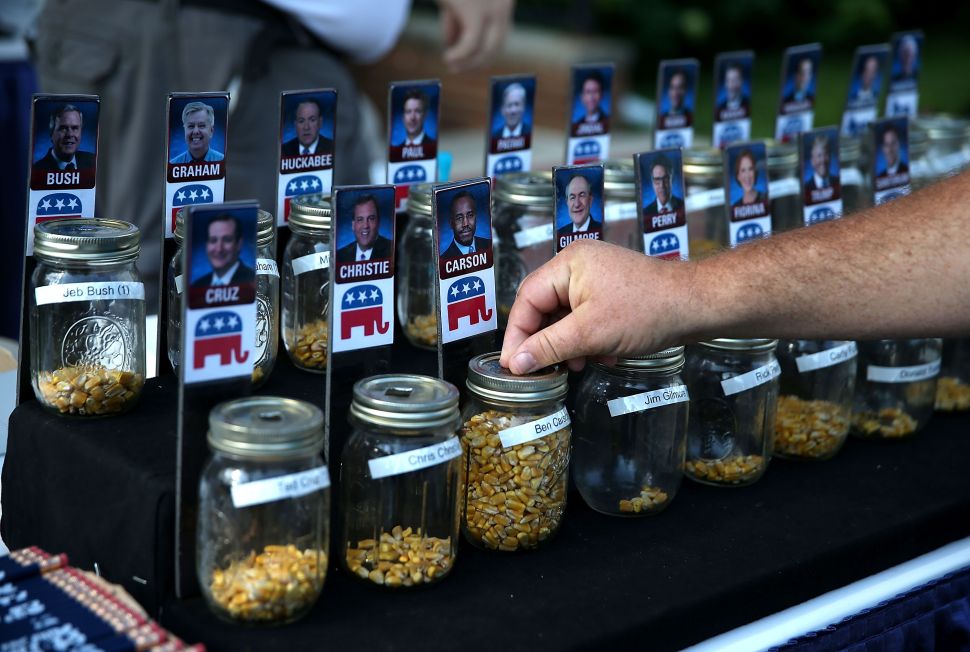