All three Democratic candidates had a mission coming into the fourth Democratic debate of the season, the first of 2016 and the last before the Iowa caucuses. Ex-Secretary of State Hillary Clinton had to reaffirm her front-runner status in the face of recent struggles and underscore her appeal to minority voters at an event sponsored by the Congressional Black Caucus Institute. Vermont Sen. Bernie Sanders had to continue his upward momentum in the early states and defend his record on gun control. And ex-Maryland Gov. Martin O’Malley, polling in the single digits, had to remind America he existed.

Speaking in South Carolina, where many Democratic primary voters are black, Ms. Clinton clearly sought to align herself with President Barack Obama. She embraced Obamacare—both the term and the legislation—and assailed the surging Mr. Sanders for his past proposals for universal healthcare (he unrolled a new one hours before the debate), which would dissolve all existing government insurance programs into a larger “Medicare for all.” She praised the president’s success in passing the legislation (though she had criticized him for dropping the public option from negotiations at the time), and argued it was unrealistic to reopen the “contentious debate” and seek something more ambitious. She also blasted Mr. Sanders for criticizing Mr. Obama as “weak” and for suggesting in 2011 he should be primaried in 2012—perhaps her most damaging blow against her socialist rival all night.

Queen of the Hill

Ms. Clinton was dominant for much of the debate, leaving Mr. Sanders grimacing as she ripped into his record on gun control—his multiple votes against the Brady bill for background checks for handguns, his opposition to legislation that would have banned guns on Amtrak trains, and the “Charleston loophole” which allows firearm dealers to go through with a sale so long as the feds don’t tell them not to within three days. The last, of course, is nicknamed for the clerical error that allowed Dylan Roof to buy the weapon he used to murder nine people in a black church last year, just a short distance away from where the debate took place.

Mr. Sanders struggled to acquit himself, not directly answering the attacks, but instead highlighting his longtime support for an assault rifle ban and his D-minus rating from the National Rifle Association.

Despite spending most of the night on the defensive, Mr. Sanders managed to pivot several times to his strong suit: what he argues is the undue influence of billionaires in Washington, D.C. It also permitted him to rip Ms. Clinton on her weakest point: her longstanding ties to the financial industry:

“I don’t take money from big banks, I don’t get personal speaking fees from Goldman Sachs.”

Ms. Clinton struck back by pointing out that hedge fund managers were financing ads attacking her, and stabbing at the one chink in Mr. Sanders populist armor: a 2000 vote against regulating credit default swaps, the derivatives tied to the 2008 financial crisis.

Slightly less depressing was his request “Can I get 30 seconds, too?” when Mr. Holt offered Ms. Clinton that much time to discuss the phenomenon of terrorist lone wolves—if only because of the applause he won from the audience. (His later “30 seconds, please?” “Just 30 seconds” were the third and fourth saddest moments of the night).

As the two top-polling candidates brawled—rolling over each other, over time limits, over the moderators, threatening even to disrupt the cuts to interludes of advertising—Mr. O’Malley tried desperately to insert himself into the conversation. Unfortunately, when he managed to speak, he mainly sounded like a combination of his two rivals, which is unlikely to help him break out as a strong contender in his own right.

Mr. Holt’s offer at the end of the debate to let him say things he hadn’t gotten a chance too left him red-faced. He used the time to hit on Latino issues like the Puerto Rican financial crisis, immigration reform and narco-trafficking—issues likely to resonate with an important segment of the general electorate, but not necessarily with Iowa and New Hampshire primary voters. 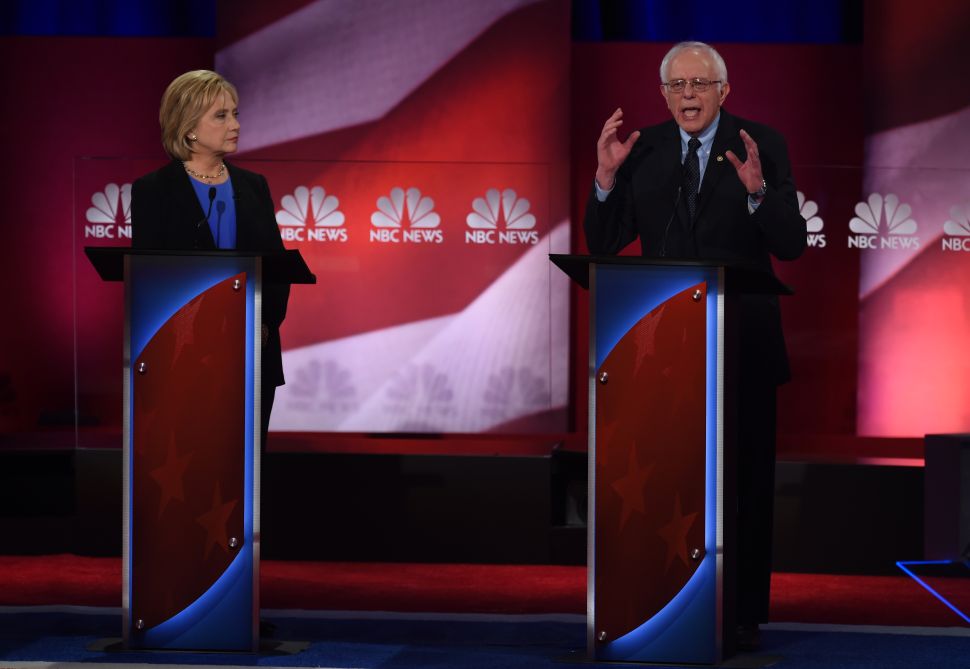