He pretended to be an earnest, humble, self-effacing “businessman nerd” while pushing a right-wing agenda that favored the rich and hurt the poor and working class.

First, Mr. Snyder raised taxes on pensions for retired senior citizens while lowering taxes on the “job creators” who might greet him at the country club.

Next, in one of his sneakiest moves, Mr. Snyder and his Republican-dominated Legislature announced that they would use a lame-duck session to ram through a “right-to-work” law with no public hearings. Their successful scheme seized power from unions and gave it to anti-union companies in December of 2012.

But now his image and reputation are severely tainted by the poison scandal in Flint, Michigan, a mess that makes it appear that the Snyder administration showed, at best, reckless disregard for the health of the citizens of a poor community.

Flint’s now contains lead, thanks to decisions made by the governor’s administration. That lead is now in the bloodstreams of Flint children. It can cause brain damage.

“It’s just a travesty,” Flint mayor Karen Weaver said Wednesday. “It’s a minority community and it’s a poor community and our voices were not heard.”

You don’t govern a state like a business. Businesses fire workers. Businesses pull out of markets. A business can close down; a state can’t.

Last summer, independent journalists and scientists proved the was poisoned but their evidence was ridiculed by Brad Wurfel, then the spokesman for Mr. Snyder’s Department of Environmental Quality.

“Let me start here,” Mr. Wurfel said. “Anyone who is concerned about lead in the drinking in Flint can relax. It does not look like there is any broad problem with the .”

He and others were forced to resign in recent weeks when the truth became undeniable and a state of emergency was declared. National Guard Troops are helping to deliver bottled .

In the Democratic presidential debate last Sunday, Hillary Clinton called this man-made disaster an “outrage” and said Mr. Snyder acted as if he didn’t care.

“I’ll tell you what,” Ms. Clinton said. “If the kids in a rich suburb of Detroit had been drinking contaminated and being bathed in it, there would’ve been action.“ (Mitt Romney grew up in the tony Oakland County suburbs north of Detroit. Not everyone here is poor).

Flint is under state control due to bankruptcy. Mr. Snyder’s minions decided to save a few dollars by getting from the polluted Flint River instead of comparatively clean Lake Huron.

Because they didn’t treat the polluted , it caused lead to leach from inside old pipes. Residents found it foul smelling, darkly colored and abrasive to the skin and complained about it nearly two years ago.

And this isn’t the only damage-control situation in Mr. Snyder’s empire, with its crumbling roads and mammoth trucks.

In Detroit’s blue-collar suburbs, you can see the reactionary spirit of the angry working class. The Tea Party movement is strong here, though it isn’t known if they boil local with their tea bags.

He also has taken control of the bankrupt Detroit Public Schools, which have been hit since the start of the year by wildcat strikes from teachers who say—among other things—that the building conditions are intolerable and class sizes unmanageable.

Mr. Snyder’s fiasco embarrasses other Republican governors in the Great Lakes region who have taken credit for the economic recovery under President Obama.

Leaders like Mr. Snyder, John Kasich of Ohio and Scott Walker of Wisconsin like to brag that they use sound business principles to run their states frugally and wisely.

The problem is you don’t govern a state like a business. A business can fire its workers (easier now than ever!) Businesses pull out of markets that don’t promise profit. A business can close down; a state can’t.

The Michigan Attorney General, a Republican named Bill Schuette, is investigating the situation but is unlikely to find much. A better chance for truth and, perhaps, justice, will come from the U.S. Department of Justice, which is also on the scene.

Although Michigan is often thought of as a liberal state, it is purple at best. It was suburban Macomb County that started the “Reagan Democrats” movement in 1980.

In Detroit’s blue-collar suburbs, you can see the reactionary spirit of the angry working class: A big Confederate flag painted on a garage door in St. Clair Shores; a large, yellow snake flag flying over a fenced-in home in Waterford. The Tea Party movement is strong here, although it is not known if Tea Partiers up in Flint boil local with their tea bags.

They aren’t stupid. Republicans have successfully gerrymandered state districts so that even when the Democrats win a majority of votes they take only a minority of seats in the state legislature in Lansing.

Both of these “family values” right-wingers are married with children. Michigan, keep in mind, is the state that produced the famous gun nut Ted Nugent, a once-popular guitar player, writer of misogynist lyrics and pal of Mike Huckabee.

Both Mr. Courser and Ms. Gamrat ran again in November, apparently without self-awareness. (Perhaps love really is never having to say you’re sorry). Both lost.

Among those on the other side is Mr. Moore, whose breakthrough documentary “Roger and Me” in 1989 chronicled the desertion of Flint by General Motors.

Another is the entertainer Cher, who has donated 181,000 bottles of drinkable . On MSNBC Wednesday, Cher told Tamron Hall that Mr. Snyder and his staff “have known about this for a long time and did nothing.”

“I don’t understand when someone is given protection of people but they don’t protect them,” Cher said.

Mr. Snyder tried to explain it Tuesday during his State of the State address. Standing there with his gray hair expensively styled, choking on some of his words, he wore a nicely-tailored suit and looked like one of those mournful college basketball coaches after a tough defeat during March Madness.

Then he turned disingenuous when he added: “Government failed you—federal, state and local leaders—by breaking the trust you place in us.”

This sanctimonious cant isn’t quite the same as “Blame me.” It is an obfuscation meant to spread the blame and responsibility and deflect some of it from where it really should go.

What Mr. Snyder should have said was “My narrow-minded, short-sighted approach to government has been exposed. I’m glad this isn’t the West in the 19th. Century. Shoot, those folks might tar and feather me and run me out of town on a rail. For years, we Republican governors have sneered at the federal government and now, I’m begging President Obama for disaster relief that comes from your hard-earned tax dollars. I’m resigning right now before I can do more damage or before they decide to perp walk me in handcuffs down the capitol steps.” 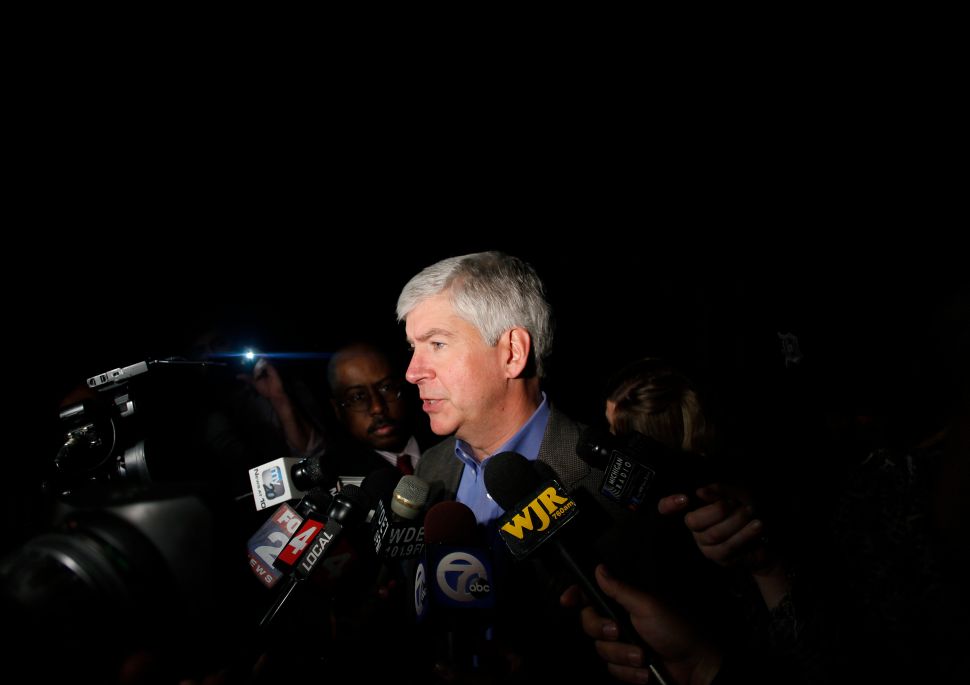