For the past 30 years, New Yorkers couldn’t get on the subway without seeing Dr. Jonathan Zizmor’s smiling face. The dermatologist, who pioneered underground advertising with his pitches for cosmetic procedures, has been a target of affectionate parody since his first ad appeared.

But that all ended on Monday, when the Daily News reported that Dr. Zizmor had retired and shut down his Manhattan office. Anyone who Googled the doctor’s name was met by this stark advisory:

Utterly disgusted that NYC is letting Dr. Zizmor ride into the sunset without brokering a settlement to protect the future of the subways.

dr zizmor is retiring & closing up shop, the past is behind us and our childhoods are dead

A Kickstarter campaign to build a statue of Dr. Zizmor and place it in a subway station.

It's been several hours since news of his retirement broke, so when the hell is de Blasio going to announce the Dr. Zizmor statue

Dr. Zizmor has been a comforting constant in MTA ad space for as long as I can remember.

NYT can finally make a serious attempt at a "New York is Over" story with the news that Dr. Zizmor is retiring

Dr. Zizmor is trending which must mean it's 2AM and I'm on a subway, half-asleep, staring at his strange ads.

Dr. Zizmor flips off the lights, gives his skin machines a last look and whispers, "Thanks, Dr. Zizmor." Then he jumps back into the sewer.

Dr. Zizmor’s retirement coincides with his mansion going into contract. The Bronx abode, which has been on the market since 2012, was intended to promote world peace—the doctor wanted to invite “people who hate each other” to spend a weekend at the house and work out their differences. 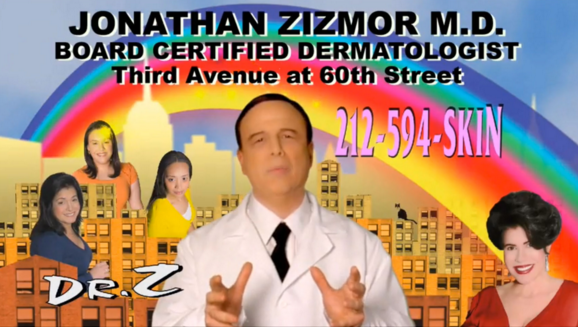