This was a very tough year for Ukrainian President Petro Poroshenko—up to the very last seconds of it. It was filled with the most embarrassing imagery of his country’s unruly political class giving his government a bad name.

In November, for example, Mrs. Alexandra Kuzhel, representative of the Fatherland party in the Parliament, received a heavy blow to the head with a glass bottle from a male fellow parliamentarian in the corridors of the Supreme Rada. It knocked her out and almost cracked open her skull.

Then, during the television broadcast of his year-achievement speech, Prime Minister Arseny Yatsenyuk was pulled into the air by a fellow-parliamentarian who grabbed the Head of the Cabinet by his testicles, having shoved a bouquet of roses into his hands first. His sharp suit juxtaposed against the flowers—which Mr.Yatsenyuk clutched, never letting them go during the assault—made him look like a dummy groom from wedding shop being taken to a better location. The iconic picture naturally went viral.

Arsen Avakov, the Minister for Internal Affairs, threw curses and a glass into the face of Odessa Governor Mikheil Saakashvili during a Cabinet meeting chaired by none other than Mr. Poroshenko himself. Then, in the presence of the Ukrainian President, both Minister for Internal Affairs Avakov and Prime-Minister Yatsenyuk said of the reformers’ darling that he “fucked up his own country [Georgia of which Mr. Saakashvili was President] and now came to fuck up ours [Ukraine]”.

Then there was the arrest of one of Mr. Saakashvili’s subordinates from the reformers’ administration in charge of infrastructure developments of Odessa. He was caught taking a 450,000-hryvnia bribe, empowering the skeptics.

When the grafter was arrested on the 30th of December, for a brief moment the Ukrainians thought that that was it for the year and that Mr. Poroshenko could take a breath. With only a day left in 2015, his year of rough seas had surely come to a close.

But—no. With the last chimes of the past year, virtually during its last seconds—an additional insult was piled on the Ukrainian President by his former fellow-oligarch turned arch-rival Ihor Kolomoisky, whose 1+1 TV Channel went as far as to deal a scalpel blow to the Ukrainian President’s  New Year Message to his nation. In an “unprecedented case of censorship, the oligarch’s TV channel cut short the address of the President. It wasn’t the Government authorities that censored mass media [this time] but the other way around. To please its owner, the TV channel tried to censor the Government,” wrote the journalist of Ukrainskaya Pravda Viktor Ukolov.

From one perspective, 2.5 seconds deleted by Kolomoisky’s TV channel from a 6.49 minute video of the President’s New Year message doesn’t seem like much.

From another viewpoint, these 2.5 seconds (or 0.61% of the message) were all that there was in the President’s address that supposedly represented the fight against notorious Ukrainian corruption. Preceded by the brave Ukrainian SWAT team storming forward in the dark of night, it was intended to demonstrate the victory of law enforcement agencies against this plague, the progress that the Ukrainian nation made last year in fighting corruption and reining in the power of the oligarchs. In fact, the caption under Mr. Kolomoisky’s face during the deleted portion read “March, 19. The beginning of de-oligarchization.”

Not falling for the script-writers’ vision, the oligarch Kolomoisky didn’t like the idea of his image serving as the poster boy for an anti-corruption fight. Even more, he didn’t want to be reminded of the time and the place that this video of him was being taken.

The current bad blood between the two oligarchs—Poroshenko and Kolomoisky—is a well documented fact. The flamboyant and outspoken Mr. Kolomoisky, who left post-Maidan Ukraine to more fervent believers and now lives in Switzerland, in his recent interview with Politico called Poroshenko “the same” as deposed former Ukrainian President Yanukovich, the only difference between them being Mr. Poroshenko’s “good education, good English and lack of a criminal record.” “Mr. Poroshenko is the educated usurper, slave to his absolute power, craven to absolute power,” said Kolomoisky.

He has offered similarly charming assessments about Mr. Poroshenko’s comrades-in-arms. In the interview he called Odessa Governor Mikheil Saakashvili “a dog without a muzzle”, a “snotty-nosed drug-addict” and promised “to smash in” his one of these days. “As soon as [Saakashvili] leaves his post, I’ll beat him up and down like a dog,” promised Mr. Kolomoisky.

Yulia Timoshenko, the leader of the Fatherland party in the Parliament, was called “a prostitute”; the head of the National Bank, Valeria Gontareva, was judged “this fucking clever [one]” for trying to make the oligarch’s private bank increase its capital.

He actually likes Prime-Minister Arseny Yatsenyuk, who is “the best in the viper’s nest” of a government.

‘We were liberating the building of Ukrtransnafta from the Russian saboteurs that captured it and you are sitting here on the watch like bitch for her cheating husband.’

The night from which the 2.5 seconds of deleted footage sprang was particularly unpleasant. It was taken March 19, 2015, when the Ukrainian Government tried to seize Ukrtransnafta corporation, which managed the major oil pipelines in the country, from Mr. Kolomoisky’s hands. In the middle of the night, Mr. Kolomoisky rushed to the Ukrtransnafta’s Kiev headquarters, accompanied by 40 masked troops of his private army, armed with Kalashnikov assault rifles.

Declaring the law that limited his control over the company a “raider acquisition,” he tried to liberate the building from the head of the corporation, newly appointed by the government, and return it by the force to his own control. The Cabinet issued a statement saying that they hoped for a peaceful resolution of the situation over the besieged company. The threat was clear and the oligarch had to leave the building. On his way out, he unloaded himself on the reporter of the Radio Free Europe/Radio Liberty (this was widely reported, including by The New York Times, which even placed a link to the video, but shied away translating from Russian the unpleasant details of the oligarch’s outburst).

It all started with the reporter’s attempt to ask Mr. Kolomoisky what he did there in the middle of the night. After that, the reporter didn’t have a chance.

Mr. Kolomoisky: “[I] want to see you, fuck you, there is no other possibility to see you, your face, the face of Radio Liberty. … Or you want to see Kolomoisky, fuck you. We were liberating the building of Ukrtransnafta from the Russian saboteurs [sic] that captured it and you with your (Radio)Liberty are sitting here on the watch like bitch for her cheating husband. So, have you shut your trap by now, or you want to ask me about my passports? [Mr. Kolomoisky, Ukrainian patriot as he is, has three citizenships and had grown weary of answering why he needs them.] … Radio Freedom, fuck you, you are as free as the one that didn’t make it into the Parliament.  [Mr. Kolomoisky meant the ultra-nationalist “Svoboda” (“Freedom”) party.] Tyagnibok’s prostitute, fuck you. [Mr. Tyagnibok is a leader “Svoboda” party] … What I am doing here I will explain to you later, do you understand, fucking Libertyist? Why have you shut up? Ah? Why are you not talking? Speak up! Do you have other questions? Or did you put your tongue into your asshole? Speak up, you, you are Radio Liberty, the famous thing that broke down the Soviet Union, overthrew the Bolsheviks, raised your voice for OUN-UPA always [Ukrainian Insurgence Army that collaborated with the Nazis during the WWII], and you are on the watch [to ask about] my passports or why are you on the watch? Or you are on the watch for something else like used condoms? Where is this faggot of yours [deputy to the Parliament and reporter] Leshchenko? Nu, will you show this on your TV or on your internet? Hello—stupid?!”

Soon after, the disgraced oligarch resigned from his post of the Governor of Dnepropetrovsk region and left the country for good.

But the rest of the oligarchs remained—one of them being the Ukrainian President Poroshenko, the only one of them all who saw his fortune increase last year. Mr. Poroshenko has a number of his own private TV channels on which nobody would have dared shorten his 2015 address. The channels remain totally devoted to the anti-corruption fight and the “de-oligarchization” in Ukraine. 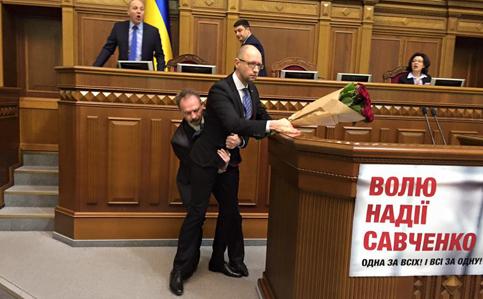