The Iranian Hostage Crisis ended 35 years ago but, thanks to a coalition of U.S. Senators and Representatives led by Senator Johnny Isakson (R-Ga), the victims are now slated to finally receive compensation for their 444 days in captivity all those years ago.

A group of U.S. Senators and Representatives—including New Jersey’s own Senator Bob Menendez—joined six former hostages from the crisis on Wednesday for a conference call. The call celebrated the anniversary of their release as well as the successful inclusion of a provision to provide compensation to the American victims using money collected from violations of Iran sanctions in the year-end omnibus package.

According to Senator Isakson, the lengthy fight to ensure increased compensation for the victims (they received $22,000 from the U.S. government five years after release) was a critical one because of the trauma endured during their imprisonment. Many of the hostages were regularly beaten and have necessitated ongoing medical treatment since release. Under the terms of their release—secured by the Algiers Accord—the hostages were barred from seeing reparations from the Iranian government.

Isakson’s provision will compensate the majority of the Americans hostages about $10,000 for every day they were in captivity, totaling about $4.4 million. Families who qualify will receive a $600,000 lump sum payment for spouses of hostages and $600,000 for each qualified child of a hostage.

“I became interested when this happened,” Said Isakson of why he decided to champion the initiative. “When you are dealing with Iran the window can close any time any place anywhere. If we didn’t seize the moment, we might lose it forever. Things all came together. Historically in my lifetime, Iran has never been a very trustworthy partner.”

“I was proud to be a part of this,” said Menendez. “I commend my colleagues in the Senate for coming together to deliver some degree of justice.”

According to former hostage Joe Hall, the money secured for the hostages, while a step in the right direction, will not be able to provide full closure for all they endured while in captivity.

“I don’t think it is too little too late,” said Hall. “Thankfully I am not in need of he money but I have grandchildren who might not go to college is someone doesn’t help them out so there is that. But, I am not sure it is the balm that heals what burns us.”

According to Isakson, the compensation for the hostages has nothing to do with the recent Iran nuclear agreement. Menendez and Cardin were vocal of their opposition to that agreement when it was being considered. It finally passed but, now, some are saying that the New Jersey senator, who has been dealing with Iran for decades on issues like the hostage crisis, may have been right.

Senator Blumenthal, an original co-sponsor of the hostage provision in the 113th and 114th Congresses, said that, because many of the hostages were now in their late 70s, a critical point was finally reached in getting the compensation secured.

“The sense of urgency was the age of the hostages,” Blumenthal said. “Time was not on their side for them to receive their benefits. This was a matter of simple humanitarian justice.” 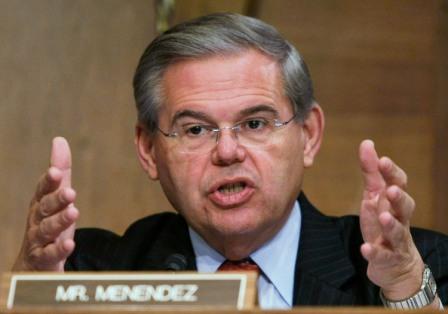