NEWARK – It was hard not to stumble into the horde of oncoming workers brandishing signs with Martin Luther King’s picture on them as they charged across the winding ramps and catwalks in the cold of January on MLK Day in search of just wages.

“We stand on broad shoulders today as we engage in peaceful protest and civil disobedience to make our voices heard about the injustices these airport workers endure here at Newark Liberty International Airport and at other hubs across the country,” said Brown. “We need the Port Authority to hear their pleas and live up to its promise to release its higher wage and benefits plan so airport workers can live with dignity and give their children a bright future.”

In an act of civil disobedience, Newark Deputy Mayor Rahaman Muhammad, Brown, Working Families Executive Director Analilia Mejia and about 12 other people found themselves in handcuffs and carted off by police.

“Dr. Martin Luther King Jr. was  an advocate of civil rights and workers’ rights,” said Gertrudis Lopez, a cabin cleaner at Newark Liberty International Airport.  “If Dr. King was alive today he would stand with airport workers like me who are fighting for dignity and a living wage so we can support our families.”

SEIU 32BJ Spokeswoman Desiree Taylor said contracted airport workers and their allies today would risk arrest as part of their commitment to do whatever it takes to win at least $15 and union rights for every airport worker. Like the striking Memphis, Tennessee sanitation workers organized by Dr. King just before he died, airport workers face inhumane conditions at work and the daily anxiety and struggles of poverty, said Taylor, who cited bottomed-out wages.

Many of them make around $8.25 per hour. For more on the recent history, go here.

“How can it be that in an industry where profits are soaring, airport workers are struggling to survive on poverty wages?” said Lesniak.  “It’s time to do right by baggage handlers, cabin cleaners, sky caps and so many other airport workers who are on the front lines and work so hard to keep Newark Liberty International Airport moving and thriving.” 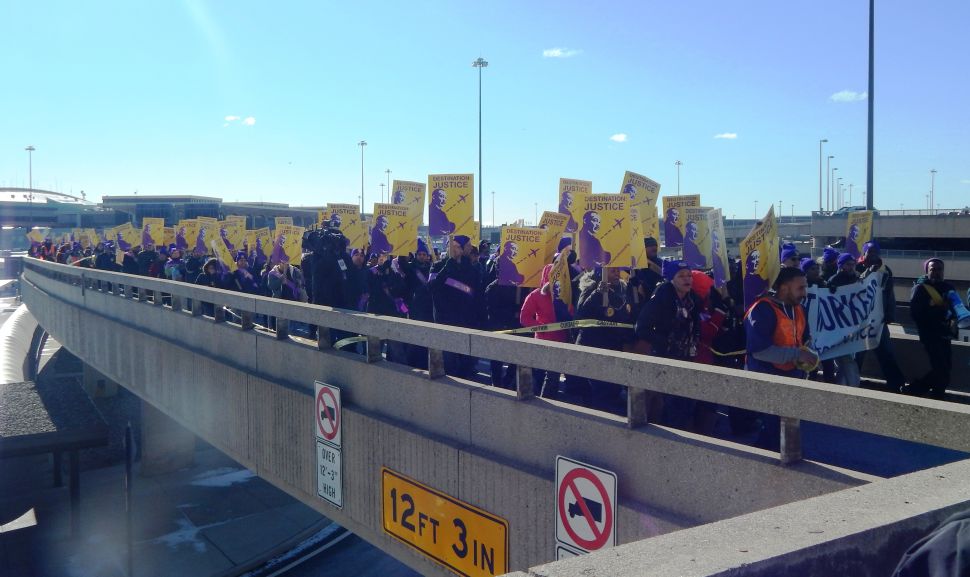