Richard Branson—business magnate heading the venture capital conglomerate, Virgin Group, known best for its Virgin Atlantic airlines and Virgin Mobile wireless communications brand—has been dubbed a master of business and public relations, and has accrued billions through his dealings.

I have met him on a few occassions. Once, in Oxford, when he opened a restaurant with my friend, world-renowed chef Raymond Blanc. And again at the World Economic Forum in Davos. On both occassions he was friendly, approachable and down-to-earth.

But a little known and unfortunate fact about Mr. Branson is his strange, anti-Israel opinions and activities that are beneath a man known for having a good and kind heart.

In 2007, at the suggestion of Mr. Branson, Nelson Mandela founded an organization called “The Elders,” comprised of a council of twelve elder statesmen who serve as “independent global leaders working together for peace and human rights.” One of the top goals and priorities of this organization is to inject themselves into the Israeli-Palestinian conflict and influence its outcome. Mr. Branson sits on the The Elders Advisory Council, using his massive wealth to fund the organization. Unfortunately, the elders Mr. Branson selected for his new group are a ‘Who’s Who’ of some of the most tenacious, anti-Israel public figures in the world today, and The Elders’ anti-Israel statements and condemning the Jewish state are a sad testament to this fact.

Surely, Mr. Branson is aware that the only people dedicated to Palestinian welfare are those who encourage them to democratize, spend money on schools rather than bombs and teach their children to love their own heritage rather than hate the Jews.

Topping The Elders’ list is former President Jimmy Carter, a man dedicated to the disgustingly fraudulent  and anti-Semitic proposition that Israel is an apartheid State. Mr. Carter’s defamatory fabrications include the lie not only that Israel is like apartheid South Africa but that “voices from Jerusalem dominate our media.” Last year he claimed Netanyahu wasn’t interested in making peace, but said about Hamas’s arch terrorist leader Khaled Meshal: “I don’t believe that he’s a terrorist. He’s strongly in favor of the peace process.” The Carter Center receives tens of millions of dollars dedicated to Israel’s delegitimization from countries with appalling human rights records including Saudi Arabia, Oman, and the UAE. He also received $500,000 from the anti-Semitic, terrorist-supporting Zayed Center, whose efforts he went on to praise the following year. The list of Mr. Carter’s actions against the Jewish state are degrading to the august office of the presidency of the United States—even if they were stated after the fact.

Yet in 2014, Mr. Branson named Jimmy Carter one of his “top five most respected people in the world,” and a man “ahead of his time.” At a conference in Egypt, Mr. Branson introduced Mr. Carter as “perhaps arguably the most remarkable person alive today.” Pressing the audience to give Mr. Carter a second round of applause, Mr. Branson announced, “I think its fair to say that he’s one of the few people in this world who has stayed faithful to the Palestinians.”

Mr. Branson is a brilliant man. Does he really believe someone who has allowed the Palestinians to continue their self-defeating terror is loyal to their cause? Surely, Mr. Branson is aware that the only people dedicated to Palestinian welfare are those who encourage them to democratize, spend money on schools rather than bombs, invest in universities rather than rockets and teach their children to love their own heritage rather than hate the Jews.

Desmond Tutu believes the Palestinians are suffering more than the Jews did during the holocaust, stating that ‘the gas chambers’ had made ‘a neater death’ for the Jews.

Other “elders” in Mr. Branson’s organization include the notoriously anti-Israel, anti-Semitic Bishop Desmond Tutu, who I have also met on several occasions, including at the Oxford Union. Mr. Tutu is a supporter of the BDS movement, calling for an economic and cultural boycott of Israel. His bigoted views have surfaced with statements such as, “the Jewish lobby is powerful—very powerful,” while accusing Jews of “an arrogance—the arrogance of power because Jews are a powerful lobby in this land and all kinds of people woo their support.” Mr. Tutu has stated that Zionism has “very many parallels with racism,” and has accused the Jewish state of subjecting Palestinians to “Israeli Apartheid.” He believes that the Palestinians are suffering more than the Jews did during the holocaust, stating that “the gas chambers” had made for “a neater death” for the Jews.

Such views are not just a moral abomination but represent a deplorable and permanent stain on the reputation of a man who won the Nobel Peace Prize.

Is this what Richard Branson had in mind when he stated in an interview, “And obviously after the Second World War, the world had enormous sympathy for the Jewish people. Over a number of decades, that sympathy has been lost…”?

I believe in my heart Mr. Branson is a good and charitable man. So why say such things about the Jews?

‘We have encouraged Europeans to label products that are made by Israeli people who occupy Palestine, so that buyers can decide whether they want them or not.’

Mr. Branson also tapped the corrupt former head of the UN Kofi Annan, the same man who overruled UN General Romeo Dallaire in April 1994 and ordered him not to use his UN forces to disarm the Hutus and prevent them from hacking to death 800,000 Tutsis. Mr. Annan in the past declared Saddam Hussein to be man he could do business with, sitting down to smoke expensive cigars with the Butcher of Baghdad. He also declared himself “deeply moved” by the death of arch-terrorist Yasser Arafat and ordered the UN flag flown at half mast.

Included in Mr. Branson’s Elders group is the man Kofi Annan appointed as United Nations special representative for Afghanistan and Iraq, Lakhdar Brahimi. During Mr. Brahimi’s assignment he criticized Israel’s violence and suppression of Palestinians and called Israel “the big poison in the region.”

Mr. Branson, apparently, sees eye to eye with Mr. Brahimi. After his 2009 trip to Israel with The Elders, Mr. Branson wrote, “On my return I rang my 92 year old father and told him of our trip. ‘It’s strange,’ he said, ‘that the Israeli politicians seem to like keeping a wound open and festering year after year.'” Now, perhaps his father said this out of ignorance. Perhaps he’s unaware of all the Israeli attempts to make peace with the Palesitinans that ended with thousands of Israelis dead in suicide bomb attacks. But then, Mr. Branson ought to know better than the response he gave his father: “Lets hope 2009 will be the year that wound is healed.”

Mr. Branson’s crack team of peace makers also includes Mary Robinson, the former head of one of the most corrupt anti-Israel organizations on earth, the UN Human Rights Council. During her time there, she presided over the Durban “World Conference Against Racism” which has gone down in history as one of the vile displays of public anti-Semitism in recent times. Yet she described the conference as “remarkably good, including on the issues of the Middle East.”

During the Gaza conflict of 2014 she and Jimmy Carter wrote a letter arguing for the recognition and inclusion of Hamas due to the genocidal terrorist group’s “legitimacy as a political actor.” Earlier that year, The Elders praised the Hamas-Fatah unity government.

Ms. Robinson’s appointment to The Elders council isn’t surprising, seeing as how Mr. Branson ignored the fact that Hamas had fired over 14,000 missiles at Israeli towns when he said, “Just watching Israel bombarding Palestine, and Palestine sending one or two little rockets over to Israel—it’s just too sad for words.”

Mr. Branson also has former President of Finland Martti Ahtisaari on board, who has said he calls on the western world to end the boycott of Hamas. “During Ahtisaari’s time with The Elders, he condemned Israel’s raid on ships to Gaza in a press release that stated, “The Elders described Israel’s attack on the aid shipment and the resulting killings and injuries as completely inexcusable.” The UN itself later exonerated Israel in this matter. But, when you’re agenda is to harm Israel, there’s little need to find supporting facts for your biased claims.

Mr. Branson is a very public figure in the business world, and I actually admire the swashbuckling commercial image he has cultivated. Why does he have to tarnish his brand with these anti-Israel statements and associations. Why pour millions of dollars into activities aimed at harming and weakening the Jewish state?

Mr. Carter recently spoke on behalf of The Elders, stating, “We have also encouraged Europeans, for instance, at least to label products that are made by Israeli people who occupy Palestine, and ship their products out of Palestine to be sold in Europe… So that buyers can decide whether they want to buy them or not.”

The time has come for Richard Branson to follow his generosity of spirit by disassociating himself with arch-Israel haters, ceasing to fund them, and to support and stand behind the Middle East’s only democracy. After all, Israel is not just the Jewish State. As a bastion of freedom and human rights in the world’s most tyrannical region, it’s also the great Arab hope that one day Arab countries will copy its example of liberal democracy and human rights. 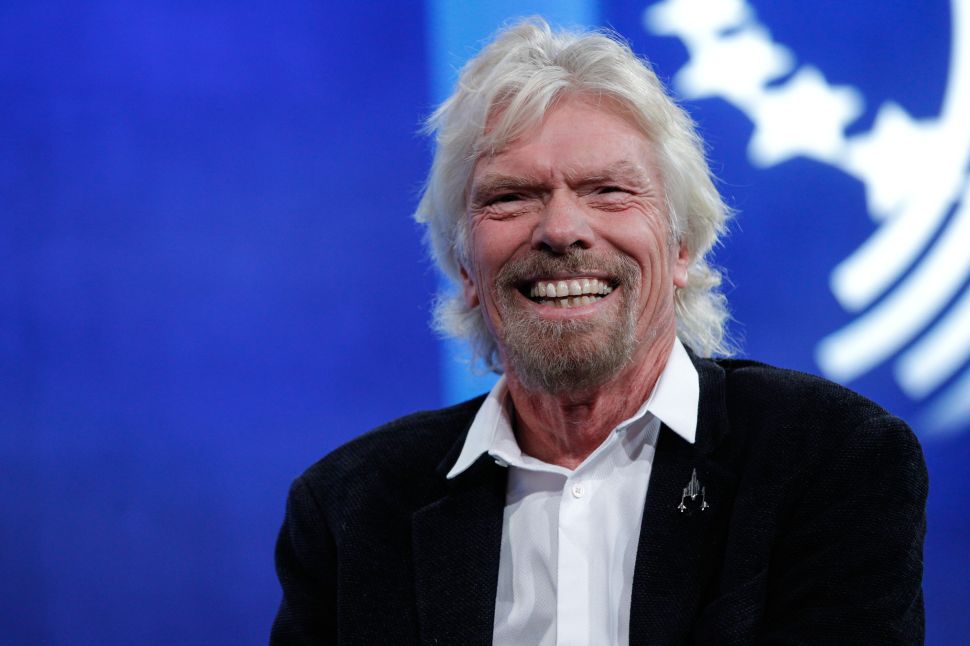