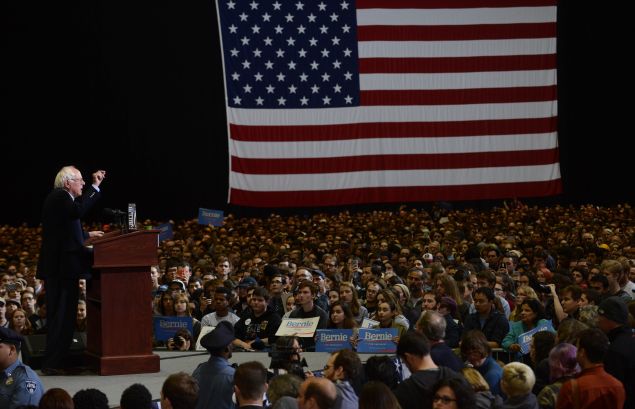 The original left-wing icon, blamed by some Democrats for costing Al Gore the 2000 election, is gratified to see that Mr. Sanders, a Vermont senator and self-described democratic socialist, is electrifying liberal voters in a way few presidential candidates ever have.

But if Mr. Sanders loses to Hillary Clinton in the Democratic primary and endorses her without demanding any concessions, like a pledge to push forward a single-payer healthcare system as president, he will have squandered almost everything, Mr. Nader fears.

“Politics is all about bargaining power. If you lose your bargaining power, you’re done. The person you lose to will never look back,” the consumer advocate and former Green Party candidate told the Observer in a recent interview. “There will be a wave of disillusionment if he holds up the arm of the militarist and corporatist Hillary Clinton whose record is diametrically opposed to Bernie’s entire political history.”

Few progressives, caught up in the thrill of Mr. Sanders’ chances of toppling Ms. Clinton, the former secretary state, in Iowa and New Hampshire, are thinking about what comes next. The odds are still very much against Mr. Sanders becoming the president of the United States, though this is not to say he can’t defeat the GOP nominee—in such a polarized environment, any warm body running on the Democratic line has a shot, and Mr. Sanders clearly has a base that cares more about him than just about anyone on either side of the aisle.

But Ms. Clinton’s stranglehold on establishment support, coupled with the loyalty potential minority voters have shown her, means she still can stop Mr. Sanders in his tracks, despite her own glaring flaws as a candidate. Spoken aloud, this amounts to heresy among the scores of Sanders fanatics who pack his rallies and town halls, and fill his campaign coffers at unprecedented levels.

A reckoning could come for the many organizations and people who make up this resurgent progressive movement in the United States, borne out of despair from the Bush years, the Occupy Wall Street protests and a political environment that rejects consensus in favor of ideological purity. How do you keep the momentum around Mr. Sanders’ candidacy from fading away? If the life-long independent does what he has promised to do and backs the Democratic nominee, what was the point of all of this?

“It’s gonna depend entirely on how long he stays in the race. If he stays in the race a long time, even if he loses badly when it gets to the convention—if he’s been in the race for more than a year, May to May, I think that it could have some spillover effect and could make a huge difference,” said Timothy Lange, a senior writer at the Daily Kos, a prominent liberal blog. “If he leaves the race early on, most advances we have seen on the progressive side are going to be lost.”

At the moment, Mr. Sanders looks built for the long haul, considering the remarkable way he has kept pace with Ms. Clinton’s fundraising while shunning major donors and super PACs. Mr. Sanders’ support is a cocktail of eager millenials and New Deal nostalgists, along with people who hate the triangulating of the Clintons. He naturally filled a vacuum that could have easily been occupied by Sen. Elizabeth Warren of Massachusetts, who was the star progressive before Mr. Sanders exploded into the race.

Mr. Lange is rightly concerned with the fate of progressives beyond the presidential ballot, because that is where the future of the movement, far less inchoate than it once was, ultimately lies. The burst of enthusiasm for Mr. Sanders, like the Obama tide that washed across America in 2008, could be ephemeral, at least in terms of winning elected offices elsewhere.

Republicans will control Congress for years to come. Seventy percent of state legislatures, more than 60 percent of governorships, 55 percent of attorneys general and secretaries of state are all under Republican control. Young liberal voters, members of Mr. Obama’s two-time coalition, don’t show up in the off-year cycles when Republicans have made their biggest gains.

“I’m always a little suspicious when people depend on non-voters, and young people are non -voters,” Mr. Lange, an early Sanders supporter, said. “The Sanders campaign has not really energized the down-ballot candidates and I don’t think that’s the fault of the Sanders of campaign. They started from almost nothing.”

The meaning of the Bernie Sanders moment depends on who is asked and what is expected. Winning beyond the presidency is a goal of Dan Cantor, the founder of the Working Families Party, a hybrid of progressive organizations and labor unions. New York-based with national aspirations, the WFP, as The Atlantic recently reported, dreams of becoming a Tea Party of the left, tugging the Democratic Party away from the Clintonian middle ground.

For Mr. Cantor, Mr. Sanders is already a victor because he has changed the terms of the debate. Occasionally risk averse, the WFP recently voted to snub Ms. Clinton and endorse her socialist rival.

“He’s made an immense contribution,” Mr. Cantor said. “Whether or not he’s the next president, he has shifted the debate, certainly among Democrats and progressives.”

There’s little doubt that liberal policy is more in vogue than it’s been in the last several decades. Even the word “socialist,” thanks to a generation of voters born after the fall of the Soviet Union, has lost much of its stigma.

The $15 minimum wage, paid family leave, and bemoaning yawning income inequality are all ingredients of the standard progressive stump speech. When Mr. Sanders declares he wants to make public colleges free for all, no one is laughing him off the stage.

Mr. Sanders is as much an avatar for these ideas as a living, breathing politician many thousands of people want to vote for. The 74-year-old slump-shouldered body and its dense political history—Brooklynite flees to Vermont, evolves from gadfly to popular power broker—is besides the point.

“What you’re seeing is the energy that animated the ‘Run Warren Run’ effort is very similar to what’s animating the Bernie Sanders campaign,” said Ilya Sheyman, the executive director of MoveOn.org, a liberal grassroots organization that first encouraged Ms. Warren to run for president and later endorsed Mr. Sanders. “What this race is showing is that if you speak authentically to the sense that the economic and political system is rigged in favor of those at the very top and offer real meaningful solutions, there’s a hunger for it from the American people.”

Observers outside the Sanders whirlwind aren’t sure 2016 will portend a greater, lasting shift to the left. In 1972, George McGovern seemed to herald the arrival of a more left-wing Democratic Party, winning the right to face Republican President Richard Nixon, symbol of reactionary conservatism. McGovern, a South Dakota senator, was routed, and centrist standard-bearers like Jimmy Carter and Bill Clinton arose in the ashes of his candidacy.

“The question is: is this lasting change?” asked David Greenberg, a historian at Rutgers University and author of Republic of Spin: An Inside History of the Presidency. “What will be more interesting to watch will be contested primary races among Democrats in the coming months.”

Mr. Greenberg argued the left flank of the Democratic Party “is greater than it has been in a very long time,” adding that “it’s quite possible in congressional races, senate races and governor races, you might see more staunchly left-wing candidates prevailing.”

If the political revolution is to last beyond 2016, assuming Mr. Sanders fails to reach the White House, it will need a leader interested in remaining a national spokesman. Would a crusty, career independent stay at the helm of such an enterprise? Or would he take his ball and go home to Vermont?

“To lead a movement all over the country requires a different kind of personality than Bernie has,” Mr. Nader said. “He’s a lone ranger. He’s not networking in Washington and had a hard time getting co-sponsors on his single-payer healthcare bill.”

Mr. Sanders has raised more than $70 million and built from scratch a campaign apparatus that is expected to power him through at least the early voting states. Though the Sanders campaign exceeded the Obama record for individual donations, it still does not quite rival the vast machine built by Mr. Obama for his 2008 and 2012 bids.

Yet the Sanders camp is quickly amassing the sort of valuable data that some progressives hope will be put to use for a wider grassroots movement in the future. The Obama apparatus never did this: after his historic election, Obama for America was folded into the Democratic National Committee and renamed Organizing for America, advocating for the president’s agenda alone.

“With the Obama approach, when the election was over, they picked up and went home and took data with the them, the software with them,” Mr. Lange lamented.

It’s worth remembering there’s a segment of the left that wants nothing to do with Mr. Sanders. Many socialists are skeptical of the Vermont senator because he supports Israel and has relatively little to say about the Palestinian struggle. Others see him as a socialist in name only, cajoling activists who may otherwise fight the power structure to enmesh themselves in the Democratic Party, ruining the opportunity for revolutionary change.

Chris Hedges, the former New York Times journalist and aggressive critic of American capitalism, excoriated Mr. Sanders for trying to work within the Democratic establishment he once vilified.

For Robert Kuttner, the co-founder of The American Prospect, a leading liberal magazine, the central question of the Sanders moment is whether the progressive troops can stay mobilized, regardless of the outcome.

“Does he try to keep the volunteer army around for the next time?” Mr. Kuttner asked. “Next time he’ll be too old. Maybe Elizabeth Warren isn’t too old.” 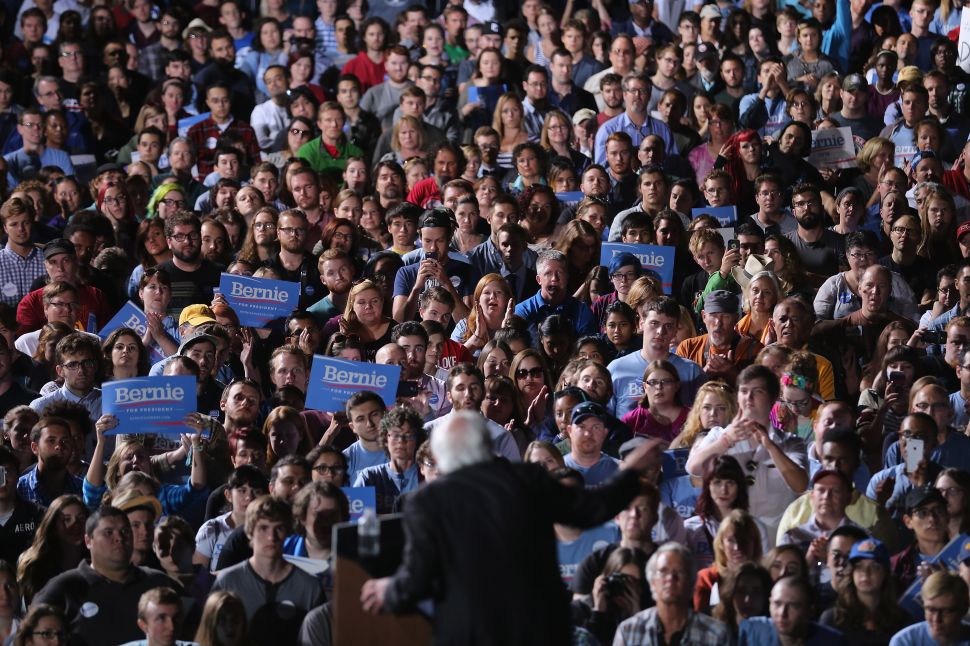