Atoms still matter. One might think that in this digital age, anything can be replaced by a bit. But see what happened in Boston last week when The Globe hired a new delivery company and chaos ensued. Reporters and editors took to the streets to deliver their product themselves. On Twitter, we watched The Globe’s Sunday editor bring his own Sunday edition to a grateful lady in a pink housecoat:

This is the Sunday editor of The Boston Globe delivering the Sunday Globe. (I'm his wingman.) #globedelivery pic.twitter.com/VfcANkNEkq

Someday, someone is going to come up with some kind of electronic distribution technology that solves this problem. https://t.co/42DQYwemxf

Atoms v. bits. The war is on. And it’s being fought on many fronts. Last week, Zeynep Tufekci, a brilliant sociologist at the University of North Carolina, wrote a touching column in The Times about her stranger-in-a-strange-land amazement at the efficient wonder of the United States Postal Service.

“I told my friends in Turkey about all this,” she wrote. “They shook their heads in disbelief, wondering how easily I had been recruited as a C.I.A. agent, saying implausibly flattering things about my new country. The United States in the world’s imagination is a place of risk taking and ruthless competition, not one of reliable public services.”

Her column is a tribute not just to Cliff Clavins everywhere but to the value of public infrastructure as a necessary condition to enable not only public service but also private innovation. I agree.

But I have wondered whether the USPS is outmoded, now that email and electronic billing have all but eliminated the need for first-class mail, which has subsidized much of the system, and now that Federal Express, UPS, and the private sector have taken over much of the parcel-delivery business (though note that they, too, still take advantage of USPS services). The U.S. postal system was founded in part as a means to subsidize the delivery and growth of a free press—including first Postmaster General Benjamin Franklin’s own newspaper. But that use case, too, is all but obsolete. Would our public dollars be better spent, say, bringing broadband rather than mail carriers to every address in America?

Because of a discussion about what a Googley Post Office might be, I oddly ended up working with a delivery consultant named John Callan on his conference, called Postal Vision 2020, to reconsider the future of the USPS and its industry. It made me at least ask whether we still need a postal monopoly to guarantee delivery to every mail box when the private sector, plus a public subsidy for difficult-to-reach places, could accomplish that goal (akin to the subsidy that brought telephone coverage to rural areas).

At the 2012 Postal Vision conference, then-Postmaster General Patrick Donahoe described the business model of the United States Postal Service today as advertising delivery. Read: junk mail. In that sense, the USPS is competing with the newspaper industry—two shrunken giants fighting for the last scraps of the business of delivering coupons and circulars to consumers’ front doors. But as I wrote here in the Observer, the days are numbered for the newspaper revenue stream of delivering inserts because circulation is falling and because stores are getting good at shifting couponing customers to mobile apps. (Target’s Cartwheel is a wonder at turning bargain-hunting into a game and at gathering a wealth of new consumer data for the retailer.)

It might be tempting to find comfort in the hubbub that is occurring in Boston as readers of good, ol’ print are clamboring to get their hands on that quaint relic of the fading Gutenberg Age, the newspaper. There’s life in the ol’ gal yet! But I worry that continuing dependence on print delays the inevitable need for newspapers to become fully sustainable digital enterprises, competing on a new stage, not against other candidates for extinction—news magazines, TV networks, news radio, post offices—but against the new companies kids are starting from their garages (instead of running paper routes).

Mind you, local delivery will still matter—not delivery of media (Andreessen’s bit carrier has won that war, don’t you think?) but of goods… atoms. Amazon is testing its own delivery infrastructure to compete with the Postal Service, FedEx, and UPS and also to assure that it can get purchases to customers in only two hours… and that’s before it figures out how to deliver via drones. And now Uber is working on its own system to deliver purchases to homes and offices. Long ago, I remember one of many task forces charged with finding a messiah for newspapers actually suggesting that their delivery trucks and Teamsters should be used to go into the moving business.

A few years ago, I spoke with an executive at a large commerce platform company, who explained to me that what is keeping local stores from competing with Amazon et al is not so much delivery but instead the fact that their inventory data is not digital and thus can’t be exposed to customers online. Uber or the Postal Service or UPS can’t deliver that tchotchke from your local Mom & Pop Store if you don’t know you can buy it there.

This inspired me to propose a new company to make it easier for local merchants to digitize their inventory. I thought this could be a way for local newspapers to update their local advertisers and help them to compete together against the cold wind of digital. Nobody bit. The old institutions are too busy defending their old infrastructures, whether newspaper presses or postal trucks or stores’ cash registers. Atoms might still win the heart but they are losing the war. 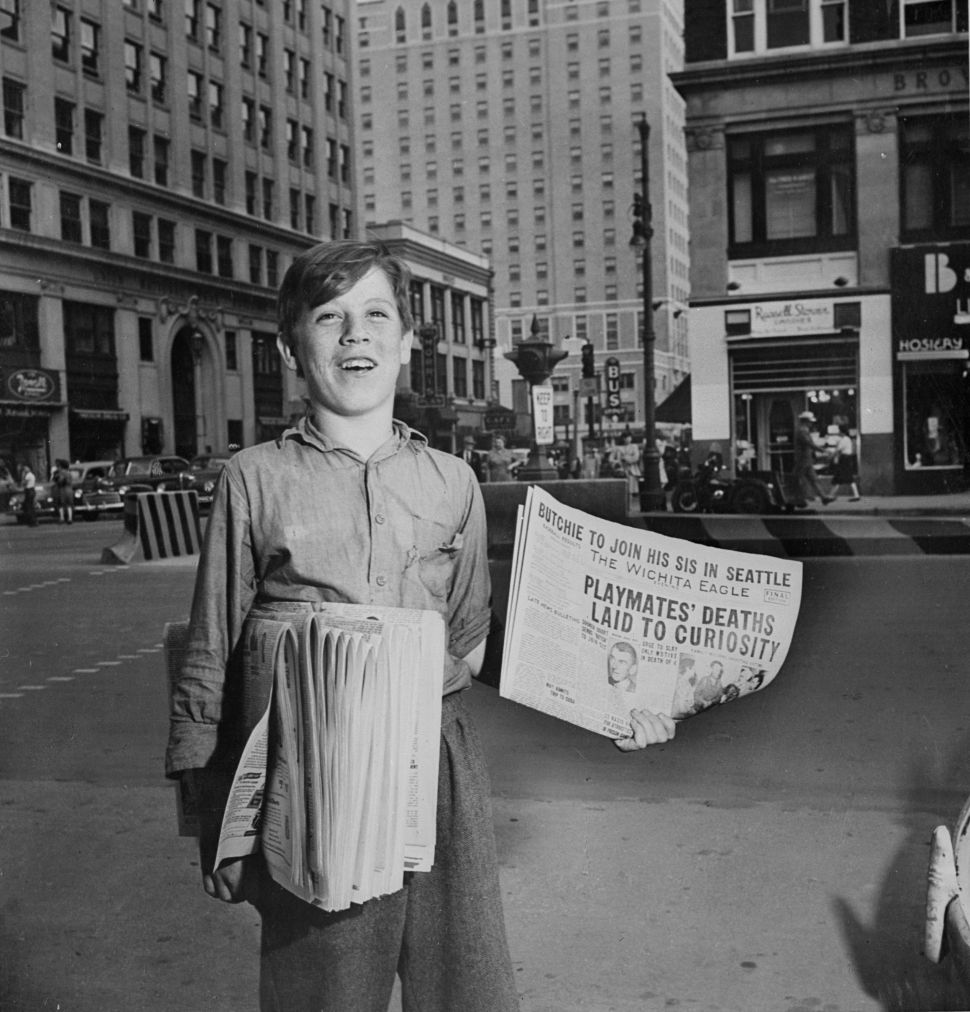