Last week marked the 40th anniversary of one of the worst terrorist attacks in American history. The bombing of New York’s LaGuardia Airport on December 29, 1975 killed 11 innocents and maimed 74 more, many of them gravely. Few noticed the anniversary, however, perhaps because this appalling crime has never been solved and remains a cold case.

The horrifying scene garnered plenty of attention at the time. The bomb, equivalent to 25 sticks of dynamite, was placed in a coin-operated locker in the baggage claim area of the central terminal. When it detonated just after 6:30 pm, the explosion shredded a wall of lockers, creating a wave of shrapnel that scythed down everyone in its path. Bodies were shattered, limbs were severed. TV cameras captured the gruesome scene. Blood, mixed with thousands of gallons of pumped by firemen, spilled all over the terminal and into the taxi stands outside.

The bodies of the 11 dead were mangled, some unrecognizable, while many of the dozens of injured were close to death. This was the bloodiest terrorist attack in the United States in decades, and New York City would see nothing like it again until 9/11. In truth, LaGuardia got lucky since the TWA baggage area was relatively empty around dinner time. Detonation a few hours earlier, when it was teeming with travelers, would have killed many more.

The crime scene had been all but obliterated by first responders trying to fight fires and save lives. The bomb looked homemade—not the work of professionals.

The NYPD had little to work with. The crime scene had been all but obliterated by first responders trying to fight fires and save lives. Investigation would eventually reveal the rough size and composition of the bomb, as well as its primitive timer—it looked homemade, not the work of professionals—but little else. Airports around the country received bomb threats in the wake of the LaGuardia atrocity, the work of cranks. No bona fide terrorists ever claimed responsibility for the attack.

The NYPD’s Ed Dreher, chief of Queens detectives, headed a task force with hundreds of investigators, representing his force, the FBI and various local and federal agencies, and they ran down leads furiously. In the mid-1970s, terrorism had become commonplace, but mass-casualty attacks were rare. Most terrorists in those days sought to send political messages more than kill innocents.

Here LAGBOMB, as the FBI named the inquiry, was different. Since no credible claims of responsibility emerged, Mr. Dreher’s team increasingly suspected the massacre had been a mistake. The primitive bomb perhaps had been timed incorrectly by novice terrorists and was supposed to detonate when the terminal was empty, or nearly so.

But that was speculation, as was whodunit. Almost a year before, in January 1975, Puerto Rican terrorists claimed responsibility for bombing the historic Fraunces Tavern on Broad Street, killing four, but there was nothing to tie them to LAGBOMB. Investigators likewise checked out groups known to be active in the New York area—the Palestine Liberation Organization and the Jewish Defense League were high on that list—but, again, there was simply no evidence linking them to the crime. Neither was there any detectable motive for why the PLO or JDL would bomb LaGuardia without claiming responsibility. Within a few months the LAGBOMB investigation stalled, failing to produce any serious suspects.

Then, suddenly, a credible suspect appeared on Mr. Dreher’s doorstep. On September 10, 1976, TWA Flight 355, a Boeing 727 with 41 passengers, took off from LaGuardia headed for Chicago. A little over an hour-and-a-half into the journey, five hijackers took control of the aircraft, announcing they had a bomb. In fact, it was fake.

After months of false starts the case was cracking wide open—detectives felt they were about to get a confession—then the FBI showed up and took their man.

They were fighting for a free Croatia, the amateurish terrorists announced, and sought attention for their cause. They hated Communist Yugoslavia—which, inconveniently, was sort-of allied with the United States and NATO in the cold war—and demanded the printing of their pro-Croatian message in leading American newspapers. They announced they had left a bomb in New York’s Grand Central Station, helpfully telling authorities where they could find it. Their ringleader, 30-year-old émigré Zvonko Bušić, was associated with a nebulous terrorist group called OTPOR (“resistance” in Croatian), as were his fellow hijackers: his American wife Julienne and three fellow Croats.

They took TWA 355, a short-ranged aircraft, on a strange journey, with landings in Montreal, Newfoundland (where the hijackers released 35 of the their hostages), Iceland, and finally Paris, where the terrorists surrendered to authorities, having done no harm to any of the hostages, some of whom noted how polite the terrorists, especially Mrs. Bušić, had been.

When they arrived back in New York, in custody, the hijackers received word that the bomb they had left at Grand Central Station—it was real, unlike the one they brought on to Flight 355—had been found by the NYPD and, in the process of being disarmed by bomb technicians out at Rodman’s Neck in the Bronx, it had detonated. Three officers were injured, one gravely, while another NYPD bomb squad member, 27 year-old Brian Murray, was killed.

Ed Dreher’s detectives therefore got a crack at Zvonko Bušić when he reached their jurisdiction. The sleep-deprived hijacker, who had been awake for days, admitted he was the mastermind of the TWA 355 seizure, yet protested that he never meant any harm to Americans, much less the NYPD. But interrogators soon asked about LAGBOMB, too. It seemed an amazing coincidence that the hijackers departed from LaGuardia, as well—on TWA no less—and constructed a homemade bomb that looked a lot like the one that tore apart the TWA baggage area a few months before.

To Mr. Dreher’s astonishment, Mr. Bušić admitted that he had, in fact, been at LaGuardia on the day of the December 29 bombing. After months of false starts, the case was cracking wide open—detectives felt they were about to get a confession—then the FBI showed up and took their man. Hijacking is a federal crime and they asserted their jurisdiction. Mr. Dreher’s team would never interrogate Zvonko Bušić again.

The hijackers all received substantial prison sentences for the seizure of TWA 355 and the death of Officer Murray. Zvonko Bušić got the longest sentence, spending 32 years in federal prison. His wife and the other hijackers served about a dozen years apiece for their part in the crime.

Mr. Bušić steadfastly maintained his innocence regarding LAGBOMB, insisting he had misspoken in exhaustion while being interrogated by Mr. Dreher’s detectives. The NYPD was skeptical about that, but the only thing there were certain of was that the FBI really didn’t want them finding out what was going on with the mysterious OTPOR crew.

What was really happening remains murky. In the mid-1970s, the NYPD got caught in the middle of a messy clandestine war being fought by OTPOR and other anti-Yugoslav activists against the Communist regime in Belgrade. In America, Canada, Australia and Western Europe, wherever Yugoslav exiles congregated, they plotted against Marshal Tito. They agitated, they protested, they planted bombs, they hijacked planes, they attacked Yugoslav embassies and diplomats.

In response, Mr. Tito unleashed UDBA, his nasty secret police, who commenced a global campaign of intimidation and assassination against OTPOR and the whole range of groups encompassing what Belgrade termed the “enemy emigration.” Secret UDBA hit teams crossed the world, killing terrorists and others they considered enemies in what they called “black actions.” Between the mid-1960s and 1990, when Yugoslavia began to fall apart, UDBA murdered about a hundred people in the West, mostly Croats, but Serbs and Albanians, too. A dozen of those murders happened in the United States. None was ever actually solved.

By the mid-1970s, UDBA had seeded secret agents throughout the “enemy emigration,” and any anti-Yugoslav group of note was penetrated, OTPOR very much included, often at high levels. Mr. Tito’s spies played a cagey game with Western counterintelligence, the FBI included. Whenever an UDBA agent showed up in America with the secret mission of taking out a terrorist, he would usually offer his services to the FBI, which wanted confidential informants inside the bumptious and violent Balkan émigré community. With a degree of FBI protection, the assassin was then free to do his hit and get away with it.

OTPOR was so heavily penetrated by UDBA that it’s difficult to determine which of their terrorist attacks in North America—these included bombings and assassinations of rival Croats, as well as the TWA 355 debacle—were really Belgrade’s work. OTPOR did nothing to end Communism in Yugoslavia, but did succeed in tarring the Croatian cause with fanaticism, terrorism and murder. A few years after Zvonko Bušić was arrested, the FBI took down most of the OTPOR network in the United States, resulting in two trials in the early 1980s that resulted in ten members of the group getting long prison sentences.

The defendants in those trials insisted they had been set up by UDBA, which sounds like a bad movie plot, but is actually quite plausible. At the exactly the same time, a sensational trial unfolded in Australia among Croatian exiles there who were convicted of plotting terrorist attacks Down Under. The half-dozen defendants, the so-called Sydney Six, protested their innocence, insisting they had been set up by an UDBA agent provocateur dispatched half a world away to take them down. Which turned out to be entirely true.

Did the same happen with LAGBOMB? For decades, Zvonko Bušić insisted he had nothing to do with that attack. Rumors long swirled in Balkan spy circles, which I’m acquainted with, that OTPOR had done the LaGuardia attack, which wasn’t meant to kill anyone—the NYPD’s faulty timer theory was correct—but the bomb was made by an UDBA provocateur seeking to discredit the group. Veteran UDBA hands tell the story that the real bomber was one of theirs and also an FBI informant, and after the LAGBOMB disaster the Bureau protected him.

This, too, sounds like B-movie material, but cannot be ruled out. A year after the Bušićes went into custody, an UDBA assassin murdered a Serbian activist in Chicago, brutally stabbing him dozens of times, and in the process also butchered his 9-year-old step-daughter. The likely murderer was a known FBI informant, and UDBA sources insist that the Feds protected him and set him up with a new identity in America, safe from prosecution.

Did the FBI do the same with the real killer or killers of LAGBOMB? Was that another secret operation gone wrong that nobody in Washington, D.C., wanted to explain? Four decades on, the bloody story seems too old to unravel with full accuracy. Zvonko Bušić was paroled in 2008 and moved to a now-independent Croatia, where he received a hero’s welcome from nationalists, who hailed him as a freedom-fighter against Communism. Mr. Bušić took his own life in 2013, aged 67, despairing of the realities of life in free Croatia. He insisted to the end he had nothing to do with the December 29, 1975 atrocity.

Yet no other suspects have emerged in this unsolved mass murder, despite countless man-hours spent on this now very cold case. Who really bombed LaGuardia? More than four decades later, it seems increasingly unlikely that the public will ever know. 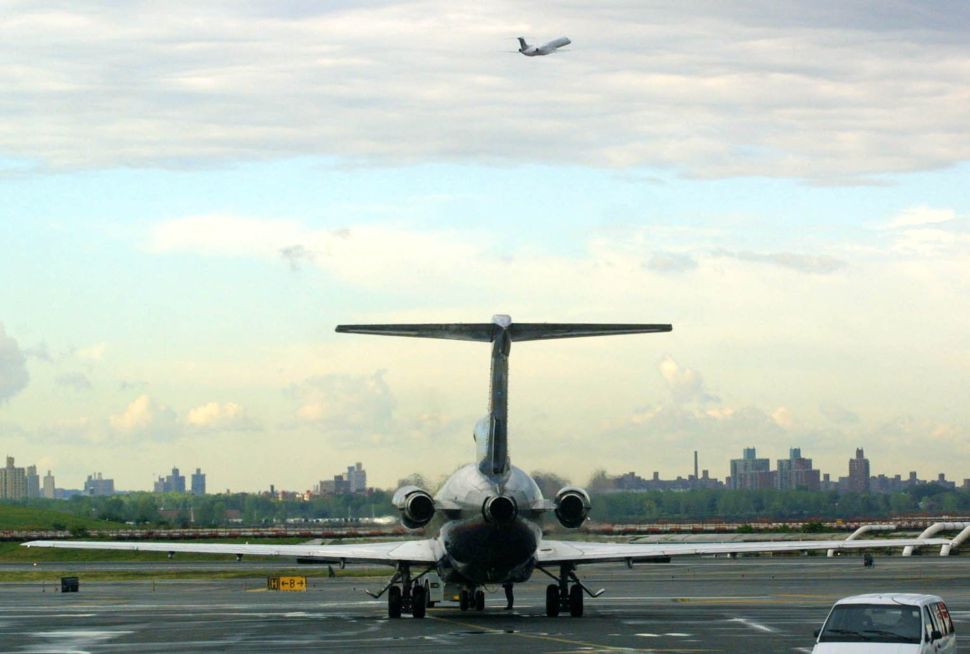