Every few days, another bombshell appears in the media illustrating just how poorly Hillary Clinton, during her tenure as our nation’s foreign policy boss, handled communications security. By now, we have a complex portrait of someone whose mishandling of our nation’s secrets, by herself and her staff, beggars belief for anyone versed in such matters. EmailGate isn’t going away, no matter how much Ms. Clinton’s supporters want it to.

The number of “unclassified” emails that turn out to be classified, some of which transited Ms. Clinton’s unencrypted server of bathroom fame, now surpasses 1,300 and may go higher still. A couple weeks ago I explained howMs. Clinton’s emails included highly classified information from the National Security Agency, based on signals intelligence about Sudan at the Top Secret Codeword level (see this for an explanation of such classifications). How they got there has yet to be explained.

We’ve since learned Ms. Clinton’s “unclassified” emails also included Top Secret information from the Central Intelligence Agency, including espionage from a compartmented Special Access Program. SAPs, as they are called in the Intelligence Community, represent “crown jewel” information. Even for holders of Top Secret Codeword clearances, the highest in the U.S. Government, access to SAPs requires special permissions, on a strict need-to-know basis.

Just what a sinkhole of secrets the Secretary of State’s office was during President Obama’s first term, when Ms. Clinton occupied that chair, is frighteningly apparent.

How such highly classified information from both NSA and CIA wound up in Ms. Clinton’s personal email is a messy question that the FBI is currently unravelling. Don’t expect pretty answers. That her staff at Foggy Bottom treated classification as a nuisance is already apparent, and such guidance, which was flagrantly illegal, could only have come from “the boss.”

Just what a sinkhole of secrets the Secretary of State’s office was during President Obama’s first term, when Ms. Clinton occupied that chair, is frighteningly apparent. Allegations are swirling that her staff systematically copied Top Secret Codeword information off separate, just-for-intelligence computer systems and cut-and-pasted it into “unclassified” emails. This, if true, is an unambiguous felony. There is reason to be cautious about this claim, which is unsubstantiated so far, and would indicate a complex degree of intent: moving Top Secret Codeword information into unclassified emails is not simple, rather a multi-step process, and would leave an audit trail.

Nevertheless, the casual approach of Ms. Clinton and her staff to classified information is already abundantly clear. Cheryl Mills, her chief of staff at Foggy Bottom, was using her personal Blackberry for work, including the transmission of classified email. That alone is a crime. Then, in a move worthy of a dark comedy, Ms. Mills proceeded to lose that Blackberry. This would be a career-ender, at best, for any normal U.S. Government employee. Ms. Mills, a longtime Clinton insider, naturally suffered no penalties of any kind for this astonishing security lapse.

Of course, the loss of classified information is bound to happen when the nation’s top diplomat refuses to use government communications systems for government business, as Ms. Clinton did, intentionally rejecting State.gov email, as has been established, and her staff did the same, with awful consequences.

‘Even half-drunk the SVR could get those emails, and they probably couldn’t believe how easy Hillary made it for them.’

Why Ms. Clinton and her staff refused to use State Department email for official business is an open and important question. Suspicion inevitably falls on widespread allegations of pay-for-play, a corrupt scheme whereby foreign entities gave cash to the Clinton Global Initiative in exchange for Ms. Clinton’s favors at Foggy Bottom. The FBI is investigating this matter in connection with EmailGate.

Regardless of whether Ms. Clinton was engaged in political corruption, she unquestionably cast aside security as Secretary of State. She can’t quite keep her story straight on why that was, and she is at pains to deny that there is any real issue here at all, suggesting that it’s just another right-wing propaganda ploy. Ms. Clinton is veering hazardously close to her infamous “What difference at this point does it make?” claim, which she touted about the 2012 Benghazi attack.

Yet, as any seasoned intelligence professional will tell you, it matters a great deal—just not in ways visible to the American public. The communications of America’s top diplomat are closely monitored by dozens of foreign spy services, and anything sent out unencrypted, as Ms. Clinton’s email was, should be assumed to be read by numerous countries, including some who are not our friends.

To take just the Russians: their plus-sized embassy in Washington, D.C. is conveniently located on a hill overlooking the city, with an impressive antenna field on its roof aimed downtown. That is where Ms. Clinton’s “unclassified” emails went. The Russians care so much about State Department information they’ve been caught planting bugs inside a conference room just down the hall from the Secretary of State’s office. “Of course the SVR got it all,” explained a high-ranking former KGB officer to me about EmailGate (the SVR is the post-Soviet successor to the KGB’s foreign intelligence arm). “I don’t know if we’re as good as we were in my time,” he added, “but even half-drunk the SVR could get those emails, they probably couldn’t believe how easy Hillary made it for them.”

Any foreign intelligence service reading Ms. Clinton’s emails would know a great deal they’re not supposed to about American diplomacy, including classified information: readouts from sensitive meetings, secret U.S. positions on high-stakes negotiations, details of interaction between the State Department and other U.S. agencies including the White House. This would be a veritable intelligence goldmine to our enemies. Worse, access to Ms. Clinton’s personal email likely gave foreign spy agencies hints on how to crack into more sensitive information systems. Not to mention that if Clinton Inc. was engaged in any sort of illegal pay-for-play schemes, our adversaries know all about that, as well as anything else shady that Ms. Clinton and her staff were putting in those unencrypted emails.

The State Department has a longstanding reputation for being less than serious about security, and its communications have often wound up in foreign hands. It’s something of a tradition at Foggy Bottom, to the chagrin of the Intelligence Community, and history records numerous examples. To take a big one, in early 1917 British intelligence intercepted the infamous Zimmermann Telegram, Germany’s ham-handed effort to get Mexico to attack the United States, and shared it with President Woodrow Wilson. Shocked, Mr. Wilson used this to get America into the First World War on Britain’s side. What he didn’t realize, and neither did anybody else in Washington, was that London got their hands on the Zimmermann Telegram by intercepting and decrypting classified State Department communications.

In every American embassy around the world, Marine guards have standing orders to fight to the death to protect the classified information—information Ms. Clinton gave away by choice.

Even by these low standards Hillary Clinton is an outlier. Her willful disregard for basic security has harmed our country, though it may take decades to discover exactly how. As a top French diplomat explained in exasperation, “You cannot say just anything on just any network!”—a reality-based viewpoint wholly absent when Ms. Clinton ran the show at Foggy Bottom.

As Secretary of State, Ms. Clinton had access to a wide array of government-supplied communications systems, ranging from lightly encrypted to deeply so, at varying levels of classification, all intended to protect our nation’s secrets. She chose not to use them, and it’s not Hillary Clinton who’s paying the price for that.

All this angers Americans with experience in our military and intelligence services who understand what Ms. Clinton and her staff did—and that they would be held to far harsher standards for attempting anything similar. They know that brave Americans have given their lives protecting Top Secret Codeword information. They know that in every American embassy around the world, our diplomatic outposts that worked for Hillary Clinton, Marine guards have standing orders to fight to the death to protect the classified information that’s inside those embassies. That Hillary Clinton gave similar information away, by choice, is something she needs to explain if she expects to be our next Commander-in-Chief. 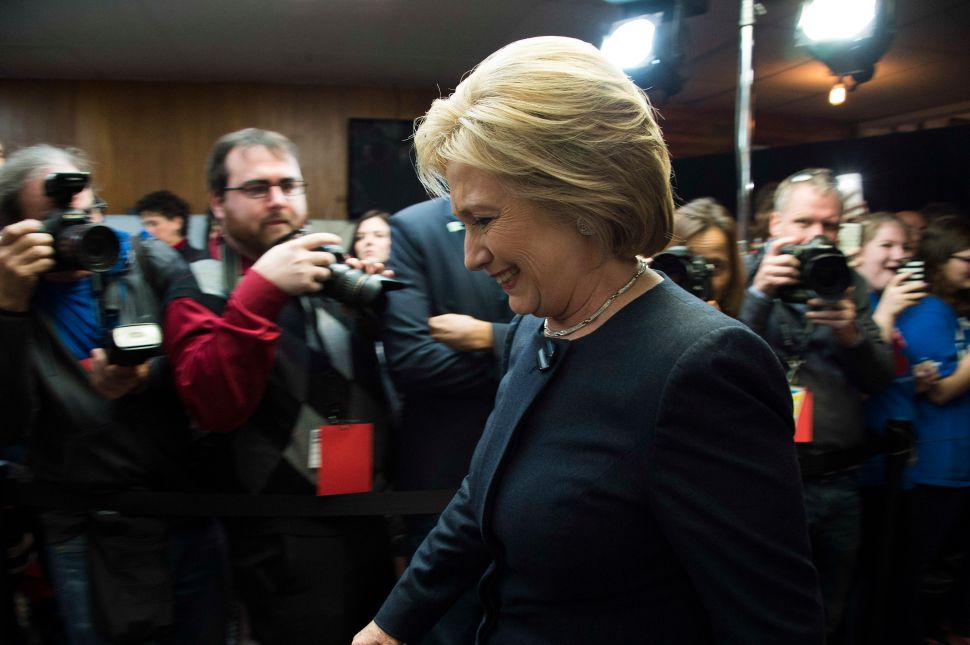