Toward the end of the second act of Puccini’s Tosca, the beleaguered heroine prays for a solution to her complicated predicament in a sumptuous melody that soars to the top of the soprano range on the words “perchè, perchè, Signor,”  or  “why, o Lord, why?”

In a great, or even a good performance of this opera, you can’t help but identify with the anguished diva’s existential dilemma. But at so mediocre a performance as the one offered last week by the New York City Opera Renaissance, the mind goes in a slightly different direction. You don’t think so much “why is this happening to Tosca” as “why is this Tosca happening to me?”

To be sure—I’ve heard plenty of worse Toscas over the years, nights when the leading lady utterly flubbed the high note on that “Perchè, perchè,” and nights when the supposedly surefire stabbing scene immediately following left the audience guffawing. No, what NYCOR delivered was not a bad Tosca, but in fact something worse: a Tosca with no “why” whatsoever, no reason for existing.

There are excellent reasons for the revival or reinvention of the New York City Opera, a company standing in relationship to the monolithic Met roughly as off-Broadway does to Broadway. From 1943 through 2013, NYCO presented rare material, re-examined familiar repertoire through innovative productions, and provided a showcase for two generations of talented young American artists from Dorothy Kirsten to David Daniels.

But the “Renaissance” tacked onto this latest iteration of the company seems, at least on the basis of a handful of performances last week at the Rose Theater at Jazz at Lincoln Center, a false hope. This was opera at its most retrograde, an effort to recreate a golden age from a handful of tinsel.

The focus of this project was on the visual presentation, a deliberate attempt to evoke the nostalgic grandeur of the sumptuous productions designed by Franco Zeffirelli that for half a century were the backbone of the Met. These are now gradually being phased out there in favor of more modern stagings, such as a stark, unsentimental Tosca by director Luc Bondy that premiered in 2009.

An early prospectus for NYCOR even hinted at a revival of Mr. Zeffirelli’s Met Tosca, which Mr. Bondy’s superseded. What the company eventually delivered, though, was something even more old-fashioned than that: a recreation of the opera’s world premiere in 1900. Original sketches from that time by the distinguished set designer Adolf Hohenstein were realized in the antique medium of painted canvas backdrops.

The result was quaint and sentimental, with stage pictures resembling vintage sepia photographs from a century ago. Every time the vicious police chief Scarpia slammed the door of his office, the back wall of the room fluttered like a sail in a choppy wind, and the supposedly cavernous cathedral of Sant’Andrea della Valle looked as cramped as an East Village apartment share.

Back in 1900, in what must have been a more suitably proportioned performing space, the singers in that first Tosca presumably would have adopted an acting style consonant with the consciously artificial visuals surrounding them, a series of statuesque poses and deliberate, stately movements. But in Lev Pugliese’s production, the performers played in standard-issue late 20th century style, vaguely “Method” but unmistakably modern. The result was not historical recreation or even anything artistically satisfying on its own terms. It was a visual mishmash.

Had the presentation featured sterling musical values, something revelatory in the singing or orchestral playing, that would have been sufficient reason to revisit Tosca. But what was heard from the two alternating casts January 20 and 21 offered only occasional and isolated moments of pleasure amid a quagmire of funereal tempos and turgid sonorities from the orchestra, led by Pacien Mazzagatti.

What was the most intriguing piece of casting on paper turned out to be the most satisfying performance. In her debut as Tosca, the American soprano Latonia Moore boasted a million-dollar voice, rich and golden across two full octaves. Particularly glorious was the very top of her range, huge glowing high B-flats and steely, electrifying C’s. Alone among the company she seemed to fit into the stylized surroundings, moving with dignity and purpose even in a mauve and kelly green getup that made her look like Diamond Lil on a Bowery bar crawl.

The company’s other standout, baritone Michael Chioldi, unfortunately had no contact with Ms. Moore since he performed in an alternate cast. This ferocious artist, a standby of America’s regional opera companies, is quite simply a terrific Scarpia, conveying the character’s venomous evil while pouring out warm, virile baritone sound. His was by far the fullest and most detailed characterization of any performer in either cast.

Farther down the cast lists the news was not quite so encouraging. Kristin Sampson, the alternate Tosca, welded a strong sense of style to a small, glassy timbre. Of the two tenors (playing Cavaradossi, Tosca’s lover), Raffaele Abete flaunted a lovely voice marred by sloppy musical mistakes, but James Valenti was mostly inaudible except for a few bleated high notes.

Worst of all, though, was the alternate Scarpia, Carlo Guelfi, who hardly sang a note all night long. Such hideous barking and hectoring doesn’t belong on any stage in the world, let alone one only five blocks south of the Met.

Ironically, Mr. Guelfi has sung this role at the Met, as one of the cast members for the controversial Bondy Tosca. That brutal take on the Puccini melodrama garnered boos from its opening night audience when it dared to omit a traditional detail of staging at the close of the second act, when Tosca reverently places candles and a crucifix next to the corpse of the murdered Scarpia.

NYCO Renaissance restored that beloved bit of business last week. But, even as expertly performed by Ms. Moore, it felt as trite and pointless as everything else about this company. 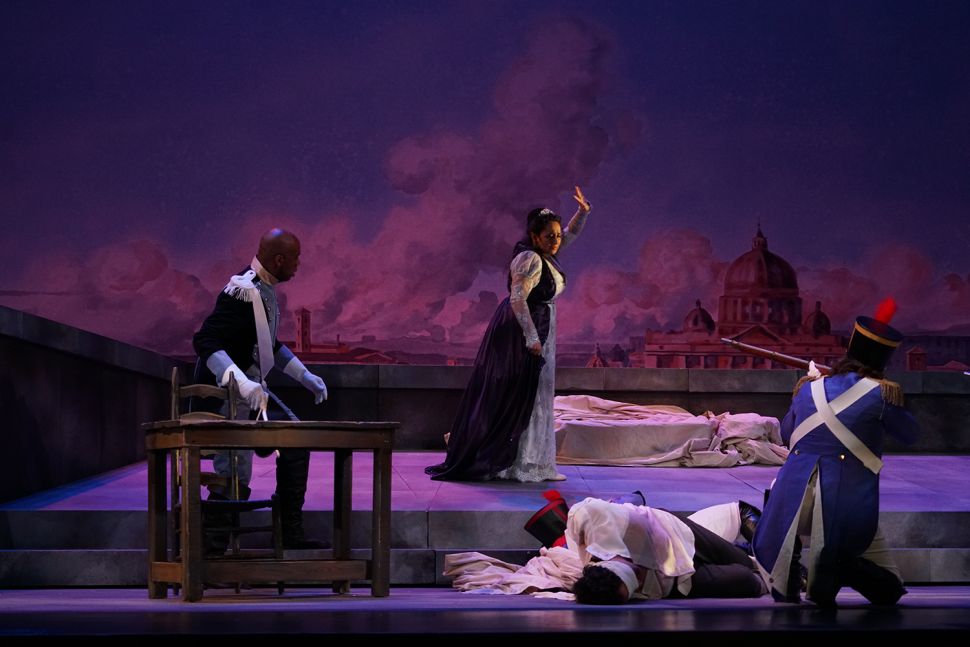