Uber is nothing more than a dispatcher for gypsy cabs. That’s all it is.

The company’s business model only works in a Wild West bereft of regulation and relies on a financially naïve workforce. However, regulators are catching up to Uber and drivers are slowly realizing that they’ve been played for fools.

Investors’ only hope is to escape Uber via an IPO, praying that investors support the stock until its sell-by date.

A slam-dunk Uber recruitment campaign would center on data showing driver earnings, but the company refuses to release such information. It curiously stopped advertising drivers could make as much as $90,000 per year. Why? Because UberX pay, at best, is equivalent to a taxi driver’s.

Consider the math: For the same trip, an UberX fare will be slightly less than that of a taxi. However, the cab driver will routinely also earn a 15 percent tip, while the UberX driver will lose 36 percent in Uber commission, NYC sales tax and the black car fee. Surge fees don’t make up the difference. Not only does Uber itself report that only 10 percent of fares are surged, but a Northwestern University study concluded that surges actually stifle demand.

Driver expenses deliver the killing blow. My independent firm published a white paper, “Towards a Cost Estimate for a NYC UberX Driver,” which concluded that UberX drivers bear costs of $7.43 per hour, resulting in net hourly pre-tax income equivalent to that of taxis. For those who lease cabs, the leasing fees gobble up an equivalent amount of revenue. Owner-operators, however, still enjoy higher net income, as they do not bear either the Uber commission or lease fees.

This may explain the whopping 45 percent attrition rate for Uber drivers who worked 12 months, a conclusion reached by a study Uber commissioned from the company’s head of research Jonathan Hall and Princeton economist Alan B. Krueger.

It’s possible that attrition rate will only increase, given that Uber just cut fares in more than 100 cities, allegedly only for the “slower month of January.” Like any retailer, markdowns are intended to attract more demand, in the hope that higher volume will make up for the lower prices.  However, lower consumer prices also means lower driver income, with no guarantee of increased volume on a per-driver basis.

Uber is now so desperate to recruit drivers that it partnered with shady subprime lender Westlake Financial, offering a lease escape clause if earnings aren’t sufficient.

Clearly, Uber counts on financial naïveté among its workforce. However, the line of marks waiting to see the cheesecake behind the curtain will likely find another attraction.

Uber faces a more challenging problem in New York City: equilibrium. Most of the 13,587 taxi medallions are on the road 24 hours a day. Uber has 20,448 cars, but only 16 percent of them are rolling at any given time. Why, after four years in New York, with 100 percent market awareness, are so few cars in service? The only explanation is that demand for Uber has been met.

This fact is filtering into the taxi medallion market, which has been moribund for 18 months. Last November, prices began to rise after 13 months of declines.

Meanwhile, in San Francisco, there has been an extraordinary turnaround in the number of taxi license applications. The Wall Street Journal reported applications fell by half between 2010 and 2012, as Uber poached cabbies. However, applications for taxi licenses have since doubled, far exceeding the 2010 high.

One logical conclusion: Uber drivers are running back to taxis because of the disappointing pay and poor treatment. Another factor may be the San Francisco Municipal Transportation Authority’s move to loosen taxi medallion purchase rules, resulting in a waiting list of 250 potential buyers. This undercuts the assertion that Uber is making taxi medallions worthless.

Look for these trends to travel beyond San Francisco.

Uber’s hostility to any regulation has backfired, and now it must engage in city-by-city combat. Shannon Liss-Riordan, the acclaimed class action attorney, is suing Uber in California to have the company’s drivers classified as employees rather than independent contractors. She keeps winning battles in the case, and an Uber loss could cost billions in driver recompense. Even if it prevails, Uber will likely face more such cases, and it would only take a handful of wins to gut its coffers.

In fact, Uber got hit with a $7.6 million fine by the California Utility Commission this month, for failing to adequately non-discrimination reports on drivers, according to Fortune.

Meanwhile, Seattle’s city council unanimously permitted drivers to unionize, which could force Uber to offer minimum wage or to exit the market. In the era of the $15 minimum wage, how many more cities will follow?

Uber’s disdain for its “driver-partners” and regulatory authority will only lead to one result: a crash. 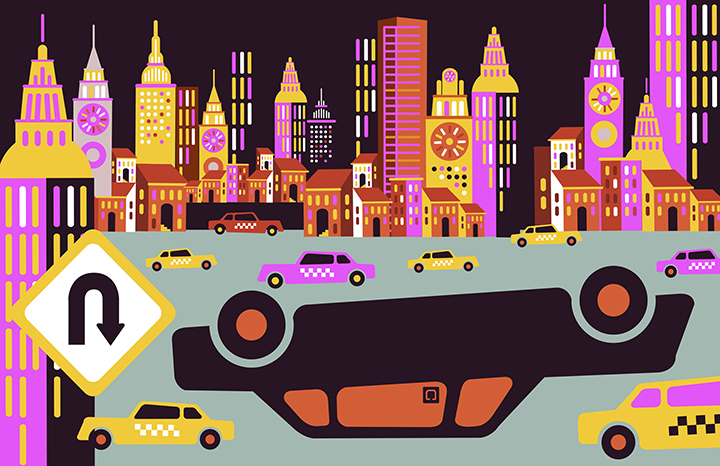