While Gov. Chris Christie is opting to keep his head down in New Hampshire in his establishment battle with John Kasich, Marco Rubio and Jeb Bush, his office released a statement insisting that he’s on top of the incoming snowstorm.

“Governor Christie continues to actively monitor the winter storm and held a telephone briefing of his cabinet this evening to direct the state’s contingency and response planning,” said Spokesman Kevin Roberts. “New Jersey’s state agencies are making all necessary preparations while models of the storm’s path and the potential impact on New Jersey become clearer as we approach the weekend.

“The Governor will receive an updated briefing tomorrow on final preparations and to determine any additional steps that need to be taken to ensure New Jersey is fully prepared and ready to clear roadways, address power outages and utility customer needs, and respond to any needs as they emerge.”

The media responded with a new round of reporting about his detachment from his home state as he amps his retail presence in New Hampshire ahead of what for him is a make or break February 9th.

With their hiring this week of Cory Booker Chief of Staff Mo Butler, the public affairs firm has now forged umbilical cords into the organs of all three statewide New Jersey politicians, a transfusion that enhances the power of firm fireballs Mike DuHaime (Chris Christie) and Mike Soliman (Bob Menendez).

Polls giving presidential candidate Bernie Sanders a Democratic Primary edge in Iowa and New Hampshire made the Sayreville assemblyman, the smartest man in New Jersey politics (this week). Wiz endorsed Sanders earlier this month – the only elected official in the legislature to do so.

The Hubert Humphrey fan fanned the flames of Republican distress as he oversaw an absolutely jam packed Bergen County Democratic Committee winter gala at the Rockleigh Country Club on Thursday night. If he can pick off incumbent Republican Freeholder Maura DeNicola this year, the party chairman will have accomplished something that even Joe Ferriero couldn’t do: install Democrats in every countywide elected office in Bergen. Six-hundred people attended the event, an estimated $100K rake-in for Bergen Dems.

The classy WNYC reporter (pictured, above) is enjoying some great reviews and strong coverage for his book about Gov. Chris Christie, American Governor. Katz’s book got a New York Times story highlighting the relationship Christie has with wife Mary Pat, and play on the Brian Lehrer Show, in addition to generating buzz everywhere in New Jersey.

The good news is that DCCC wants the seat currently occupied by Scott Garrett. The bad news is that based on past enthusiastic attempts by great candidates, Democrats can’t have it. Gottheimer insists he’s different, with fundraising powers others before him didn’t possess and aided by Garrett going haywire, according to published reports, with anti-gay comments.

The Bayonne Youth Center this week honored the veteran communications director of U.S. Rep. Albio Sires (D-8) for her commitment to her hometown of Bayonne. Daughtrey received the Dr. Martin Luther King Jr. Humanitarian Award for civic work and for her work in government.

Multiple polls, including this one from Monmouth, show the inevitable Democratic Party nominee for president, suddenly, in the words of her primary rival, “not looking so inevitable.” Clinton fought back this week, unloading on Democratic Socialist Bernie Sanders. Will it be enough to stop the bleeding? She will have to get past this week to get the answer.

The federal Department of Housing and Urban Development pointed out this week that New Jersey was only able to secure $15 million in disaster relief grant funding, missing out on over $300 million in flood relief project funding for North Jersey. According to U.S. Rep. Bill Pascrell, New York was awarded over $200 million in NDRC funding, and only 13 winners in total divvied up the $1 billion funding pool. New Jersey’s application for the NRC funding identified flooding in riverine and coastal communities as New Jersey’s greatest risk. Pascrell demanded an explanation from the administration of Gov. Chris Christie, which apparently botched the application process.

A report issued this week by the New Jersey’s Election Law Enforcement Commission (ELEC) indicated that while Big Six committee spending doubled from 2014 to 2015, it still fell significantly short of previous years dating back to 2007. Since 2002, federal laws and court cases have provided increased incentive for PACs and other special interest groups to spend money directly on elections, rather than routing it through traditional party channels. “This is a case of the tail increasingly wagging the dog,” said ELEC Director Jeff Brindle. “It used to be that state elections mostly were financed by party and candidate committees with direct support from special interest groups.”

ELEC charged the veteran Democratic Party campaign fundraiser with 25 counts of campaign finance violations. the commission alleges that Ferraioli in failing to present numerous reports, violated the provisions of the “The New Jersey Campaign Contributions and Expenditures Reporting Act.”

Read the entire ELEC report below…

The city’s apparently bracing for a big hit from this incoming winter storm in addition to trying to manage all its other woes, but this excellent story by NJ.com’s Brent Johnson spells out the ongoing bomb throwing between state officials and local electeds.A nightmare. 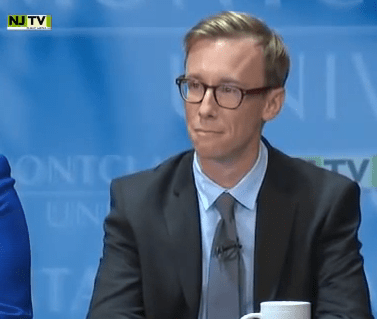