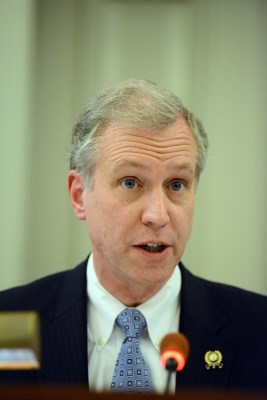 “As a member of the State Assembly for nearly 20 years and a former chairman of the New Jersey Democratic State Committee, I have seen first hand the dissatisfaction among Democrats that exists for business as usual,” Wisniewski said.

Wisniewski, a Democratic superdelegate and the former New Jersey chairman, will be appearing with Sanders tomorrow, Tuesday January 5 in New York for a speech calling for reforms on Wall Street.

“Our most vulnerable populations face enormous challenges, while at the same time many of our state’s big corporations and political insiders continue to rake in millions in government contracts and massive tax subsidies. The working family, the middle class taxpayer, the public school student and the senior citizen continue to be the victim of our state and nation’s political culture, and I believe that the Sanders campaign represents a chance to finally break free from this legacy of insider dealing and corruption.”

“John Wisniewski and Bernie Sanders share something in common: Both are willing to speak truth to power – no matter the cost, ” said Weaver. “In his role as co-chair of the New Jersey Legislative Select Committee on Investigation, it was his dogged pursuit of the truth that uncovered the administration scandal known as Bridgegate. John and Sen. Sanders share a commitment to retaking our democracy from the billionaires and making it work for everyday people.”