A telling moment during the Republican debate Thursday night came shortly after the predictable lame jokes about Donald Trump’s boycott and long before all the pious religious pandering.

It happened when moderator Chris Wallace of Fox News sparred with Texas Senator Ted Cruz, whose braying, hectoring voice and barking delivery hinted at one of the visceral reasons he is called the most disliked politician in Washington.

Despite getting the most camera time and a few easy questions in the early minutes, Mr. Cruz protested to the moderators that he was being mistreated.

The audience in Des Moines booed, seemingly at Mr. Cruz.

Minutes later, Mr. Cruz circled back to the topic with what might have been an attempt at humor.

“Gosh,” Mr. Cruz said. “If you guys ask one more mean question, I may have to leave the stage.”

Because all seven debaters wanted to replace Mr. Trump as alpha dog of this attack pack, several took turns snarling over how tough they would be on immigration.

For just a moment there, it was hard to tell if he was mocking Mr. Trump or threatening to imitate him. Shortly thereafter, because Mr. Cruz’s name was mentioned in Mr. Wallace’s question to Governor Chris Christie of New Jersey, Mr. Cruz thought he had the right to respond.

When Mr. Cruz kept protesting, Mr. Wallace held his hand out, palm flat, in a “stop” sign a traffic cop might give a car.

“I’d like to go on,” he said over Mr. Cruz’s continued protests. “Sir, I know you like to argue about the rules, but we’re going to conduct the debate.”

Mr. Trump said he stayed away because Fox News actress Megyn Kelly asked him a tough question in the first debate that said, basically, why are you such a disgusting sexist, Mr. Trump?

Mr. Trump demanded Ms. Kelly be removed from the panel of moderators. Fox News refused. Mr. Trump said Fox insulted him again with a sarcastic news release. Ms. Kelly, no doubt, will join Rosa Parks and Mrs. Roosevelt among the finalists for the female face on the $10 bill.

This being a Republican debate, there was no talk of gun safety, growing wealth disparity, climate change and global warming and precious little about health care.

Because all seven debaters wanted to replace Mr. Trump as alpha dog of this attack pack, several took turns snarling over how tough they would be on immigration. This is particularly rich for people like Mr. Cruz and Mr. Rubio, the sons of immigrants who would pull the drawbridge up behind them.

As you might assume, this being a Republican debate, there was no talk of gun safety, growing wealth disparity, climate change and global warming and precious little about health care.

Instead, almost all the candidates vowed to make our military stronger and put it to use against people like ISIS.

“They blow people up!” Mr. Rubio said of ISIS. He kept promising to capture terrorists and send them to Cuba, land of his ancestors and, awkwardly for Mr. Rubio, America’s new best friend in the hemisphere..

Mr. Cruz, despite facts that totally contradict him, insisted Obamacare is a “job killer.” Mr. Christie pandered to the culture-war extremists by calling abortion “murder in the womb” and mentioning that he’s Catholic.

Noting that Hillary Clinton might appoint President Obama to the Supreme Court if she becomes president, Mr. Rubio said it would be a “disaster” although an objective person might note that Mr. Obama is young, energetic, experienced, thoughtful, respectful of others and an expert on the Constitution.

Speaking of past presidents, Mr. Cruz seemed to win the door prize for invoking the name “Ronald Reagan” the most times while Ben Carson scored red-white-and-blue points for mentioning Theodore Roosevelt and for reading the preamble to the Constitution.

Mr. Rubio gave a shout-out to “Jesus Christ, who came down to earth and died for our sins.” Mr. Wallace and Governor John Kasich of Ohio discussed the study of Scripture.

Mr. Rubio—perhaps seeking to steal the evangelical vote from Mr. Trump and Mr. Cruz—discussed “living in eternity with my creator.” Just before that, Mr. Rubio was preaching about “our Judeo-Christian values.”

In that the world has more religions than these two, he seemed to be leaving out some major ones, like, oh, Islam. Rand Paul talked about a theologian and assured the nation “we must have a religious bearing.” Mr. Cruz said “God has blessed this country with enormous natural resources.”

Speaking of him afterward on CNN, Gloria Borger said “Cruz has a target on his back tonight and I’m not sure he weathered it all that well.” 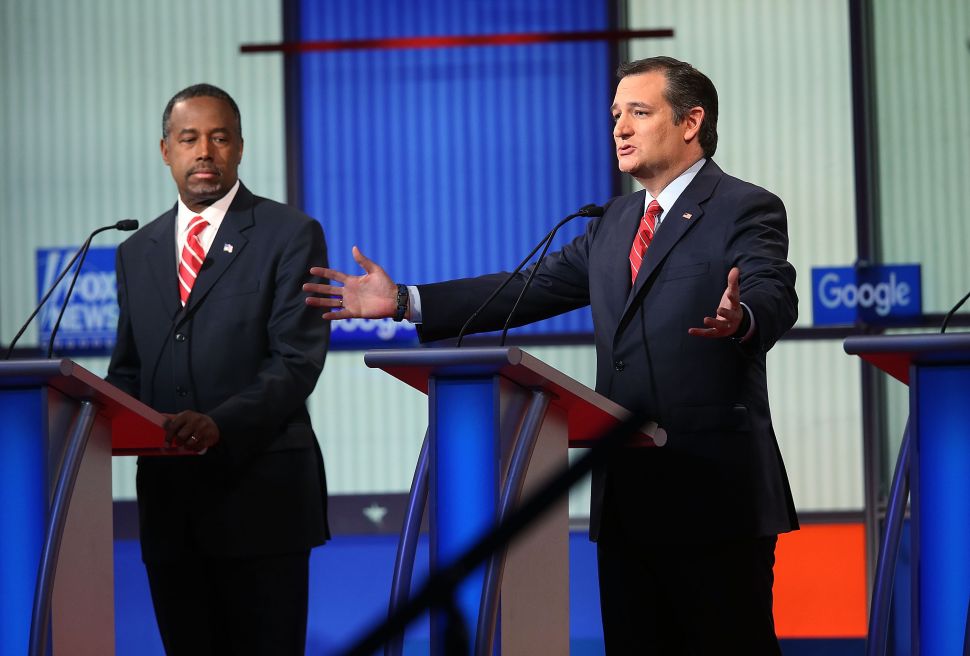