Ever wanted to bring your innuendo-laden text messages to life? A team of artists in the West Village has tried to make that a reality, introducing a specially outfitted “Netflix and chill” room on Airbnb, based on the, you guessed it, overused internet euphemism for hooking up.

“I guess we sort of just always play around with our work with popular culture and internet culture, and part of that is memes,” Tom Galle, one of the artists responsible for the project, said in a recent phone call with the Observer.

The room, priced at $400, is a collaboration between Mr. Galle and Art404, a conceptual art company. It is stocked with—of course—access to Netflix, a large high definition projector, surround sound speakers and custom-made Netflix and chill sheets, which are replaced entirely after each use, Mr. Galle assured. There’s even a hairdryer.

The room is available only for Saturday nights, to maintain exclusivity. “Netflix and chill wouldn’t happen on a Monday night,” Mr. Galle said.

The limited rental times will also allow for cleaning, sheet replacement and restocking of the mini bar. (Oh, the mini bar? It’s stocked with champagne, wine, rose, rum, vodka, gin, bourbon, whiskey, beer, and juices and soda to mix drinks—Mr. Galle told the Observer that all the alcohols provided will be “the better brands.”)

The West Village apartment also features views across the city, a rooftop with skyline views, a large marble-finished bathroom and a prime location in the bustling village.

The room has attracted plenty of media attention, but so far only one couple has actually booked a night, although several other inquiries have been made. The room is far from the only “Netflix and chill”-themed item to spring up online. Netflix and chill condoms? Check. Phone case? Check.

Airbnb has played host to a variety of more creative housing experiments lately, including a Brooklyn igloo (removed by the site after six hours) offered during last weekend’s snowstorm.

“For us, it’s more from an artistic perspective,” Mr. Galle said. “We’re all artists and we view our medium as our subject. That was our primary goal: to do a project that does something with internet culture and gets the attention of people.” 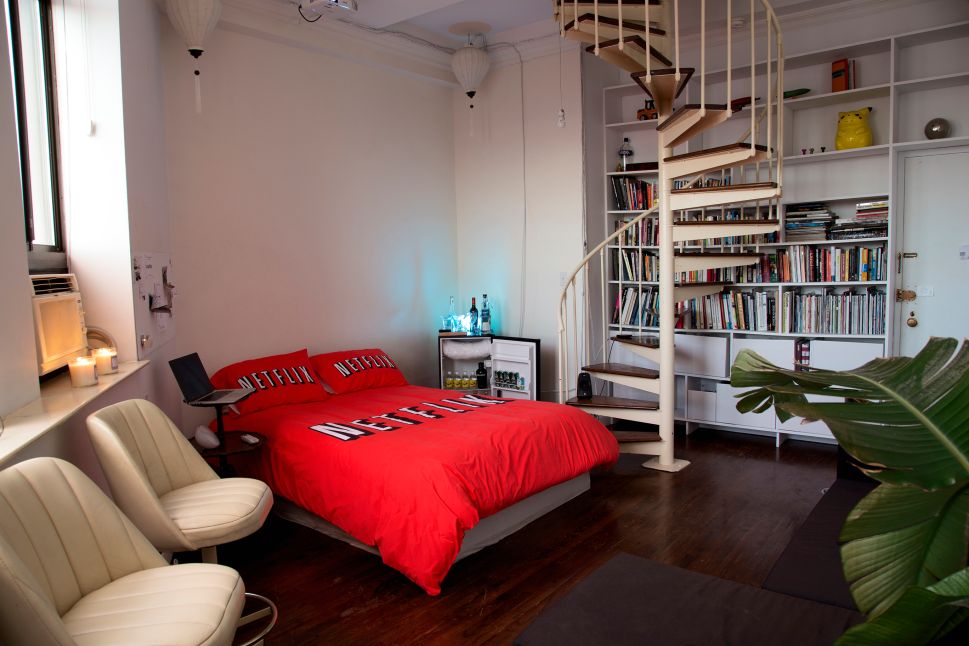