(Manchester, NH) — In many ways, the New Hampshire presidential primary is our Super Bowl. I made the trip for a few reasons:  1) to determine if I’m #FeelingTheBern or #ReadyForHer, 2)  to gently troll Chris Christie’s campaign events (and truth squad with the press afterwards) and 3) we are political people and this is what we do. It’s a really exciting atmosphere but there’s also a looming sense of dread. Most of us won’t leave here as winner. And deep down we all know it.  But all that nervous energy only adds to the sense of excitement. Here are some impressions from the field:

.
6. Bernie People v. Hillary People. (FWIW: I like Hillary but I like Bernie more.) With the poll gap between the candidates narrowing there’s a not-so-friendly tension going on between the two camps. Hillary people just can’t understand why Bernie people are so naive. Bernie people aren’t much liking team Clinton’s condescending tone (or lack of self-awareness thereof.) Is it getting a tad mean-spirited? Sure. But it’s nothing like the internecine bloodbath going on in the GOP. But that’s an awfully low bar. My advise to Dems: check yourself before you wreck yourself.

.
5. Just like sports, we live and die with the fortunes of our Team. Another likeness: there’s only one winner. Which means lots of losers. Take Saturday’s debate: I watched alongside a room full of (mostly) Republicans who were glued to the monitor like it was do-or-die. Their reactions – groans, cheers, boos, gasps – were indistinguishable from those of any die-hard fan watching their team slugging it out in a most consequential playoff game.
.

4. New Jersey Dems are freaking out. They’re looking at Hillary’s polling and they’re losing their minds. It’s like they’ve seen this movie before and know how it’s gonna play out. Even if Hillary beats expectations on Tuesday (and doesn’t get mauled) it’ll be little salve for her truest believers. But they’re still having fun. And they’ll be having a lot more fun after South Carolina.

.
5. Hey, I know you. If you see a familiar face 300 miles from home, you’re going to say hello, even if it’s to someone who’s not on your side. My limited interactions with Christie’s field ops were surprisingly pleasant and revealed his team in good spirits and genuinely optimistic. Basically they were all surprisingly zen given Christie’s cratering numbers. Either they know something we don’t, or they’re giddy that they’ll be getting some well-deserved R&R. Very soon.
.
6. Rubio got pwned. Governor Christie did very well at the debate (if his goal was to halt #Marcomentum.) I went to bed thinking I underestimated the Governor’s longevity in this race. And then I woke up to discover that, according to Twitter anyway, Christie’s biggest accomplishment was making Marco Rubio people hate him. We’ll see. While Chris Christie’s gotta be pleased with his debate performance, he’s still broke and his numbers are still in the tank. And he still can’t tell the truth very well (i.e.:  #EbolaNurse)
.
7. Bad sign. Not sure if it’s desperation (probably) or having so much money they don’t know what else to do (more likely) but Jeb! signs outnumber everyone else combined. It was like nothing I’ve ever seen. Long stretches of roadway would be blanketed with Jeb! signs. Hillsides were smothered in them. The pundits said Bush turned in a good debate performance. The crowd watching in my hotel certainly seemed to agree. But all those signs reek of insecurity in a very “please clap” kinda way.

.
Finally, a demi-confessinal anecdote for you. Please don’t judge too hardly. My first morning here, I went to breakfast and asked about the buffet. “Are you here for the Chris Christie event?” he asked. “Yes,” I lied. Turns out I’m staying at a hotel full of Christie fans. Then I found out Team Christie was staging several events out of this hotel (including one at that very moment.) Am I proud that i marched through his morning event with a big sign with an-anti Christie sign like the bitchiest peacock ever? No. But I’m not ashamed either. Besides, I had to drop that sign off to someone on the other end of this sprawling hotel complex. The reaction from Christie supports was predictable.  One asked if I had a job. Another suggested I go (redacted) myself. I deserved it.
.
But what fun is a political Super Bowl without some trash talk?
.
Jay Lassiter started covering New Jersey politics in 2005 as a blogger for BlueJersey.com. After a stint as America’s first State House blogger, Jay did communication for Congressman Rob Andrews and Congressman John Adler. Jay’s best known for his work legalizing medical marijuana and gay marriage and for working to end N.J.’s death penalty. He’s on Twitter @Jay_Lass. 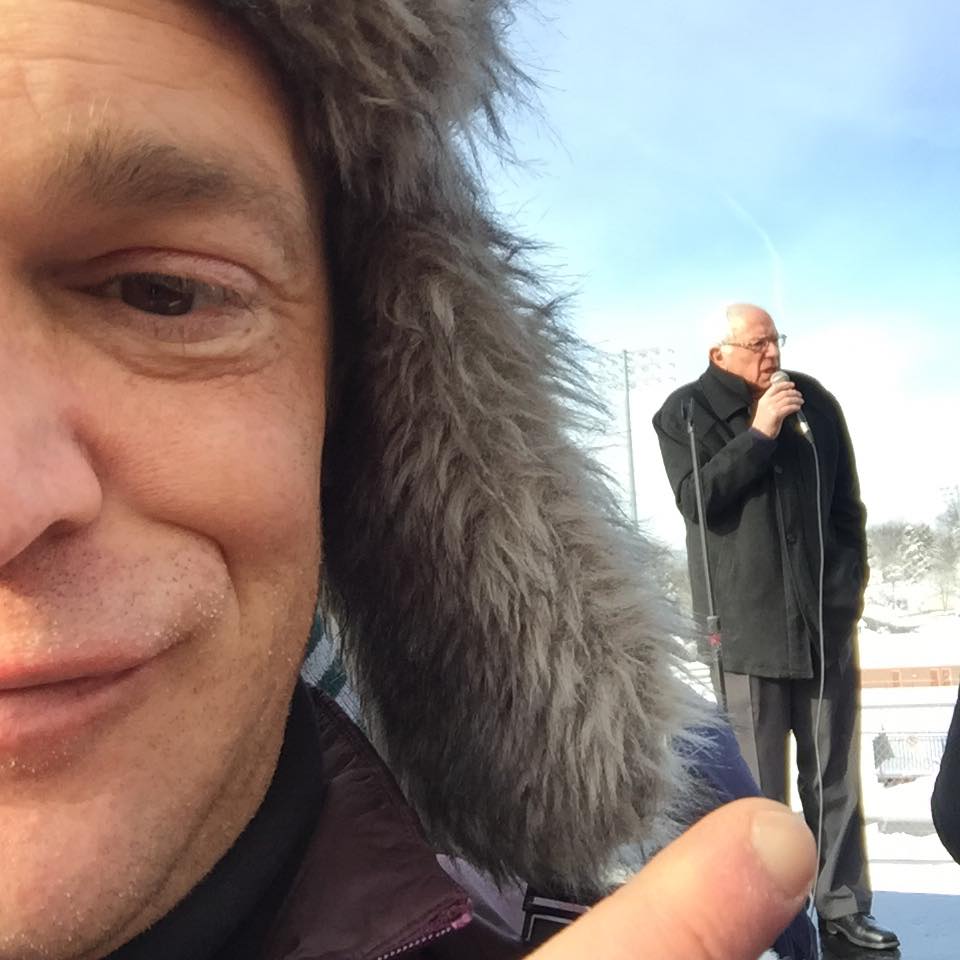