The argle-bargle has broken out, and it’s only just begun.

For since the first report of Justice Scalia’s death (of “natural causes,” another phrase we don’t hear often these days), there has been nothing but reaction and speculation and conjecture left and right—given free reign over the past 72 hours by every information medium, to whose advantage it is to stage election-year politics like a series of playoff sporting events in overtime, if not overdrive.

When you have a weekend like this last one, with something unforeseen thrown into the mix, it feels like a game-changer. Scalia’s passing knocked one of the great American retail holidays, Valentine’s Day, right on its ass, and record low temperatures in the Northeast became an afterthought when the Sunday morning network news shows became the binge-watch du jour.

Scalia’s death brought Senate Majority Leader Mitch McConnell out to the microphones only hours later to say, no matter what the president had in mind, the Senate would not allow a nominee of a lame-duck president to leave the judiciary committee for a full confirmation vote. On his part, President Barack Obama took a moment during his weekend off to say that he would be putting forward a nominee as soon as he could.

Members of both parties rallied around those positions. The SCOTUS issue amped up the Saturday night Republican debate, turning it into an epic hatefest for the ages, sending the Internet into a steroidal-rage frenzy of speculation and conjecture about how all of this will shake out. For the presidential campaign. For the president.For the next president. For each political party. For the Senate. For pending court decisions and ones yet to be heard. For the future. For history.

The majority of the talk has centered on which party has gained any political advantage by responding the way it has. Has McConnell’s avowed intransigence given President Obama a cudgel to use against a Republican strategy of greater outreach to minorities? Has he crushed the remaining centrists’ hope for bipartisan cooperation and unwittingly taken his party to more rigid extreme? Or will the denial of the president’s responsibility and right under Article II of the Constitution to make such nominations (famously articulated by McConnell in 2005 under a different administration) be outweighed by the delight—and enthusiastic turnout—of the Republican base to see Obama’s second term become, as one pundit put it, “a three-year presidency?” It has worked for the Republicans in the midterm elections. But then, what if the Democratic base is fired up by this strategy and its turnout is motivated by a strong anti-Congress sentiment—a prospect that could have an effect on the Republicans’ precarious majority in the Senate as well?

“There is no more clarifying debate in politics these days than when it comes to Supreme Court nominees,” Jim Manley, a Democratic strategist and former aide to Senator Harry Reid of Nevada, told Reuters. “This now is for all the marbles.” And David Axelrod, a former top adviser to President Obama agreed: “The court may genuinely be a major issue this year. It will be a hell of a fight.”

One gets the feeling that precedents don’t really matter to the electorate this year, judging from the popularity of unorthodox candidates who have made a more emotional connection to their supporters. We haven’t seen this sort of circumstance since Justice Kennedy was nominated in 1988 in the wake of the unsuccessful vaunting of Robert Bork by Ronald Reagan in 1987, and the question remains unanswered whether this round of entrenchment would galvanize the sense of fear and potential loss that would move voters to the idealogues or, alternatively, to the pragmatists, who can find a solution to the problem in an acceptable person. That’s a judgment call.

Before Scalia’s untimely demise, the conservative majority on the court was preparing to invalidate Obama’s immigration and climate-change policies. The loss of the court’s most articulate and staunch conservative creates the possibility for 4-4 ties that would allow the more liberal-leaning lower court decisions to stand; this would not sit well with Congressional Republicans. Yet you can be certain that whatever drama plays out in the Senate this year will find a parallel on the campaign trail, and now, with such a game-changing and irrevocable event occurring, voters might become a little more cautious about the dogmatic and a little more comfortable, albeit with a sense of resignation, with the practical. You get the sense that this might turn out to be a good weekend for the troika of Republican establishment candidates left in the race and Hillary Clinton. 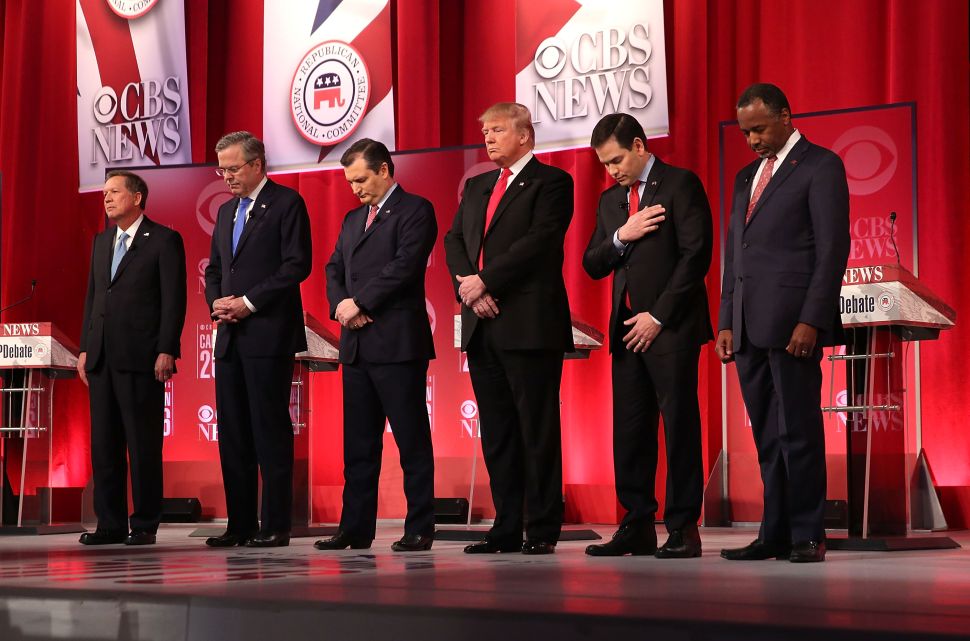