According to Working Families NJ Director Analilia Mejia, the diverse group, known as Better Choices for New Jersey, demonstrates the changes that need to be made in Governor Chris Christie’s approach to the budget across the spectrum. She said that the main thing the coalition is focused on is putting the people of New Jersey ahead of tax breaks for millionaires and corporations, leading to better use of state funds in the budget.

“Budgets are moral documents,” Mejia said. “Through this administration our Governor has shown that he prioritizes the wealthy and the well-connected rather than working families.”

Mejia said that, because the budget shapes the flow of all of the state’s dollars, wide representation from groups in the coalition is critical.

“The impact on working families is broad and, therefore, we have a broad range of advocates here,” she said. “[Governor Christie] is going to focus again on his theory that trickle-down works. Under this administration we have given away billions of dollars to the wealthy. He is trying to give away more of it and then tell us all there is not enough.”

Like Mejia, the other advocates were pessimistic about what Governor Christie’s 2 p.m. address would hold.

NJEA President Wendell Steinhauer, discussed how priorities like making sure public workers received their due and protecting public employees were critical.

“They won’t be the priorities you are going to hear at 2 o’clock,” Steinhauer said. “You may wonder why he has put his needs ahead of New Jerseys. The fact is very clear, he has turned his back on federal funding. The reason he is doing that is because he is appealing to the people of Iowa and New Hampshire. Well, his candidacy for the presidency is dead. But do you think his priorities will suddenly change?”

“I think we know what we are going to hear today from the Governor about what choices there are,” Rosenstein said. “The real choices are about funding services and meeting our promises. We know that if we pass a constitutional amendment that makes these payments be made, that if we don’t give 700 million in fees from the pension to Wall Street, we could meet all the needs.”

Joe Karcz of the New Jersey Organizing Project represented those who are still struggling with the aftereffects of Hurricane Sandy, the colossal 2012 storm that wreaked havoc on much of the Jersey Shore and the surrounding area.

“I am not a politician, I am not a speaker, I am a union construction worker. I am a single dad trying to support two teenage boys,” he said. “These are all decisions by Mr. Christie that effect the people who pay his salary and put him in those chambers.” 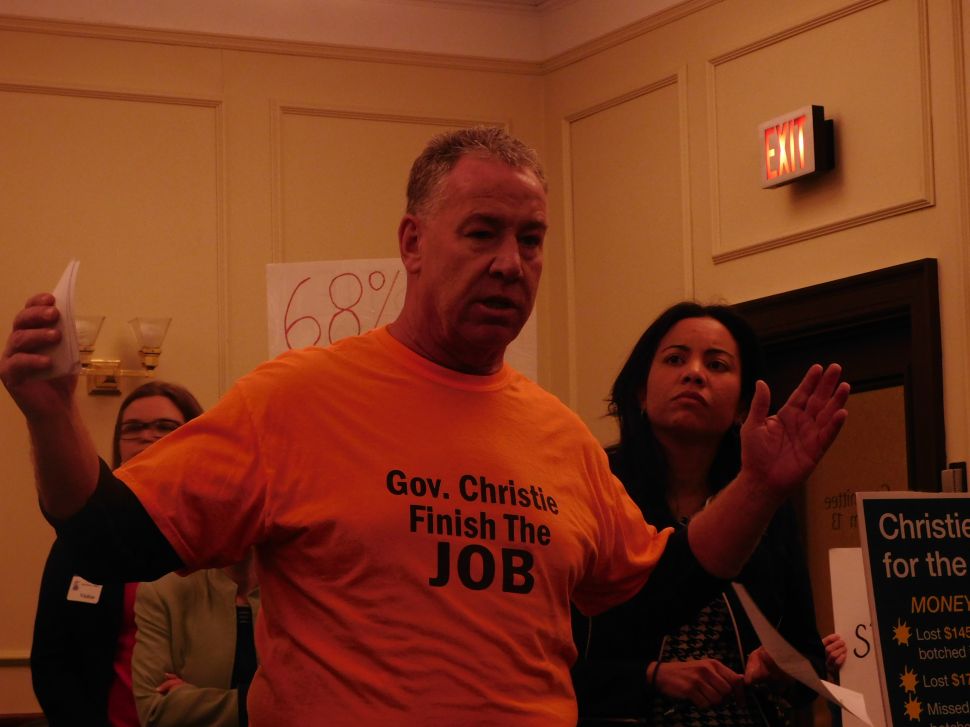