It has been 79 years since the Carnegie Deli was founded, 32 since it appeared in Woody Allen’s Broadway Danny Rose, 22 since Adam Sandler sung about it in his “Chanukah Song” and more than 10 months since it was last open and serving customers.

The famed 7th Avenue eatery reopened Tuesday following the discovery of illegal gas siphoning by Con Edison staff last April, shuttering it for months. In honor of the occasion, the Observer sat down with owner-operator Marian Harper at the famed deli, already almost full to bursting with patrons.

“It was just so unbelievable to me. We were never closed one day, because it started out with my father’s philosophy that people go out of the way to come to the Carnegie Deli from all over,” Ms. Harper said. “And we survived through blackouts, not having electricity, using candles, hand cranking the cash register to ring up the checks, and I was part of all this.”

Ms. Harper’s father, Milton Parker, first bought the deli in 1976, in collaboration with two other businessmen and he was instrumental in running the establishment until his death in 2009. Ms. Harper’s daughter, Sarri, is currently the marketing and communications director for the deli and will, one day, become the third generation of the family to operate the restaurant.

The deli’s closure—which some believed would be permanent—brought with it nearly $50,000 in fines in addition to unemployment costs to workers, repair costs and other expenses. New Yorkers and tourists looking for the deli’s famed sandwiches (the largest, named for Mr. Allen, weighs in at over two pounds) were left to look forlornly at the building’s vermillion facade.

“It was just so unbelievable to me. We were never closed one day,” Ms. Harper said. “We survived through blackouts, not having electricity, using candles, hand cranking the cash register to ring up the checks, and I was part of all this.”

“I really realized what this means to people. I mean, it’s so important to me with my family and with all the hard work that my father instilled,” Ms. Harper said. “To have other people feel, to affect them so over food, over this part of New York and the experience, is so gratifying.”

Walking into the deli, patrons were greeted Wednesday afternoon by a waiter donning a man bun, welcoming them to “Carnegie’s” and directing lines toward both seating and take out lines. As she spoke with the Observer, patrons repeatedly paused to thank and congratulate Ms. Harper on the deli’s reopening.

“We’re so glad you’re open. I thought you wouldn’t have Gus’s pickles and I was so worried. Thank you, thank you,” one woman said to Ms. Harper on her way out of the deli.

“People are paying and they’re thanking me,” Ms. Harper marveled.

The deli reopened suddenly on Tuesday morning, to the surprise of many, and has been fully functioning since. During the deli’s closure, several other locations around the country—notably in Las Vegas—remained open, and its wholesale business based in its Carlstadt, N.J. meat making facility was also functional.

The 10-month closure is not the only issue to have plagued the deli in recent years. In 2014, the owners agreed to pay $2.65 million to 25 former employees who claimed to have been cheated out of wages, and Ms. Harper sued her ex-husband, Sanford Levine, for $10 million that same year. One New York food blog even alleged the deli was “dying of neglect” in a November 2015 article.

“We’re so glad you’re open. I thought you wouldn’t have Gus’s pickles and I was so worried. Thank you, thank you,” one woman said to Ms. Harper on her way out of the deli.

Still, most of the deli’s roughly 50 staff members returned. Even in the highly transient restaurant business, the workers—whose unemployment insurance expired months ago—came back to the deli, where some have worked for many years. “They enjoy being here and they make a good living,” Ms. Harper said.

Best known for its massive stacks of pastrami, corned beef and other meats piled high on rye bread, Carnegie prides itself particularly on its unique pastrami recipe.

“Anybody can really make corned beef, because all they have to do is pickle it. With pastrami, we have it in an over for two weeks and we have our special spices that’s unique to us, like Coca Cola,” Ms. Harper explained.

Now, patrons can get their pastrami—made in the Carlstadt facility by Carnegie staff, unlike many delis—from the restaurant once again. But it isn’t just the food Carnegie patrons enjoy, Ms. Harper said.

“We have a history, and this is the look with all the pictures on the wall, and people find it very comforting,” she said. “It’s just a very joyful experience, and there’s a lot of interaction because of the way people are seated.”

The deli’s ‘wall of fame’, meanwhile, was “guarded very carefully” throughout the closure, due to Ms. Harper’s fear of theft, and the pictures remained safely locked up in the closed deli.

Currently, Carnegie is focused on its reopening, but with an 80th anniversary next year, who knows what special events could be on the horizon.

Sarri Harper, who will take over the business eventually, said this week would “make my grandpa proud, who worked so hard for us to have this.”

The deli’s bustling, its pickles and atmosphere are the same as they’ve ever been—and New Yorkers seem to like that. A long line is forming at off-peak hours already. 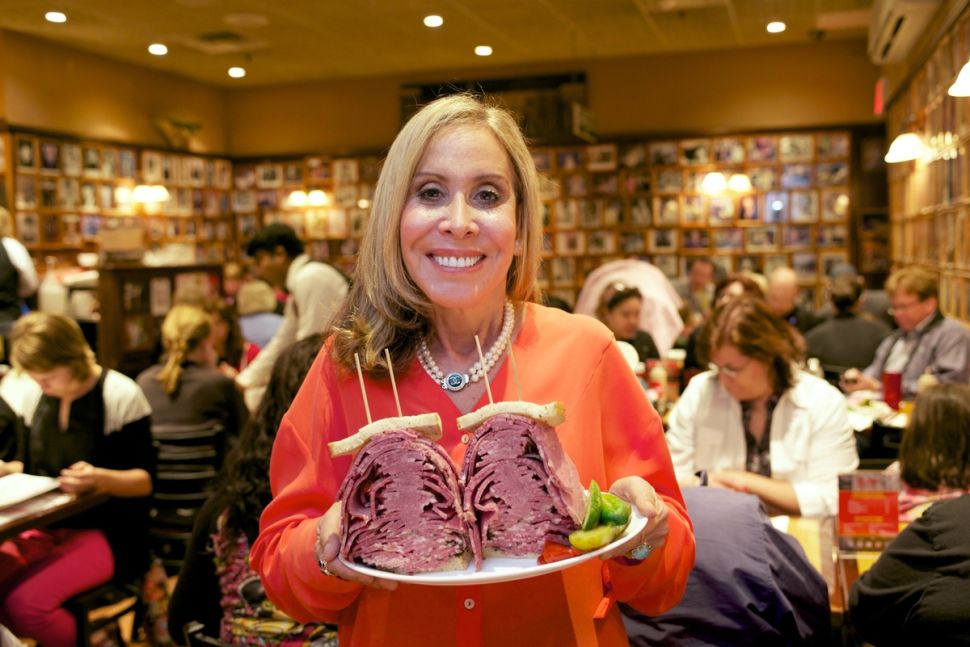