[youtube https://www.youtube.com/watch?v=ePExeW5gWMM]
When you call up Alan Ritchson–who for three seasons portrayed the hard-partying, harder-hazing Thad Castle on Spike’s college-comedy Blue Mountain State–you almost expect a challenge to a scrimmage to the death or, at the very least, a cookie race. But the charming 31-year-old model-turned actor, who you might also know from The Hunger Games: Catching Fire, Teenage Mutant Ninja Turtles, or the time he wooed Paula Abdul, is no Thad Castle. In the wake of the Kickstarter-funded BMS followup film Blue Mountain State: The Rise of Thadland, Mr. Ritchson and the Observer had a thoughtful, measured, and intelligent conversation about Blue Mountain State‘s cancellation, the shackles of network restrictions, and the psychology behind making a bully likable.

And then, eventually, we started talking about goat balls, and all was right with the world.

“The whole time we were making ‘BMS,’ Spike was trying to skew older. They wanted more Coach Daniels, more Denise Richards, they wanted an older audience…I never felt that’s why people were watching.”

Observer: It’s crazy how this movie was made, with the Kickstarter and everything.

Alan Ritchson: When the show was cancelled and when it was done, I was sort of ready to move on with my life, as I think everyone was. Then we ended up selling the show to Netflix, still relatively early in Netflix’s existence. It exploded in popularity there. It was incredible to see how we were becoming more popular by the day, and we weren’t even making new content.

We went to Lionsgate. And Netflix notoriously doesn’t share data, so I don’t think Lionsgate was aware of what was happening, because they don’t walk outside and have fifteen people all of a sudden go ‘Oh my God you’re Thad Castle!” Even when we were making the show and when it was on TV, nobody did that. I convinced Lionsgate to give me the rights and let me go at it. We figured out the best way to go about it creatively, and that was the Kickstarter route, which allowed us to keep as much creative control as possible, and sort of double check to see if we really did have an audience.

What needed to change about Blue Mountain State in 2016?

A network like Spike, they were trying to figure out their demographic, too. And I feel like they really lucked out with this show, because it was a hit for Spike in the 18-35 demographic. But the whole time we were making BMS, Spike was trying to skew older. They wanted more Coach Daniels, more Denise Richards, they wanted an older audience. My instinct was–not that Spike wasn’t great and an important part of the show–but I never felt like that’s why people were watching. I thought people wanted more of that crazy, Animal House-style college comedy. It was college students watching this wish fulfillment version of college, going “gosh, I wish I went to that school.”

When we were coming up with ideas for the movie, [BMS creators Eric Falconer and Chris Romano] turned in pages to me and I go “Guys, this isn’t Spike anymore. Why are we doing a Coach Daniels movie?” Nobody wants to see a Coach Daniels movie. It was a funny conversation because I say that, and they go “Oh my God, do you know how refreshing it is to hear that? We’re brainwashed by only hearing one note for three years. More Coach Daniels. Skew older.”

That’s interesting to hear, actually, as one of those former college students who was watching the series.

It was important for me to hear, too, because then we all knew what our Achilles heel was, and could guide this movie toward where our strengths lie in BMS.

The other thing that didn’t work so well for the show, and this was another note I gave the guys, I wanted to stay away from football. Which–I know, it’s a football show–but that’s the problem. Blue Mountain State never was a football show. That was just the backbone of what brought these guys together. To me, it was best when you were just watching the chaos of these college students trying to survive the situations they got into. There was a lot of emphasis on football during production of the show, and that was always by far the most expensive thing. It required the most stunts, it was the hardest thing to shoot, the field was incredibly expensive to use. So if you get away from that, not only do you make production less expensive, you can then focus that time on the stuff I think people want to see.

“If we do more ‘BMS,’ we don’t have to make it about [football]. We can make it bigger and better.”

Plus, nobody outside the US watches American football. I understand that we had a really hard time selling the show, because people would ask what it was, and the sell was “it’s like a college football comedy.” And they’re like, “well we don’t watch football.” But it’s not a football show, it’s a show everyone can relate to. It’s a coming of age, wish-fulfillment show.

It took a concerted effort to reeducate the production and writing team, the cast and crew, because everybody was just so used to the way things were. Even now, when Lionsgate sent me the first key art for the poster, they added a football jersey. I had to explain to them how important it was to stay away from that. If we do more BMS, we don’t have to make it about that. We can make it bigger and better.

What do you think it is about Thad, as a character, that draws audiences to him? You have to assume if anyone meets this guy in real life, they hate him.

Obviously I’ve had a lot of time to think about that, and at the same time I try not to think about it too much. I don’t want to to become so cerebral to me, as someone that has to continuously bring him to life, that it becomes a formula.

I think the key element to him that works is his likability, and that comes from his boyish charm. We’re never afraid to take the traditional jock archetype, and make him almost effeminate in nature. But from a place that’s purely naive. He isn’t aware of how ambiguous he is [laughs]. He’ll 100% justify that in everything he does. It makes him more likable, more human.

It took a little to develop that. I think anyone could have portrayed Thad as very mean, and in your face, and “I know what I’m doing and you don’t,” “you’re going to do what I say.” He could have came across as just a real arrogant jerk that you just don’t like. It was important to me that we make him likable. To me it was in his boyish naivety, and that’s where his charm and charisma lie, and that’s what people relate to.

When I think back on the series I remember things like the drug trip in “Vision Quest,” or the goat balls in “The Badger.” At one point did it just become about seeing how far you could take the show, and how much you could put Chad through?

First of all, those goat balls were real [laughs]. They had fake ones made of sausage. The extras were always amazing, but there was not quite the enthusiasm that you should have for actual goat balls. It was like [unenthusiastic] “yeah, goat balls, goat balls.” I knew they had real ones there. So I was like “no, stop, we’re doing this the right way.” It brought everything to life. [Darin Brooks] is like “I’m not doing it,” and I’m like “Yes! If you’re doing it I’m doing it.” Our reactions were more real, and it brought the set to life.


But to think, how you top that in a film? It was tough. I think the film format really helped us do that. We found a way to heighten the wish-fulfillment aspect, and raise the stakes, which are life and death at times. Everything is heightened. In doing it as a film, nothing is filtered. Everything we wanted to do on Spike but couldn’t because of cable restrictions—those are gone. I think people will be both shocked, and appalled, and pleased with what we’ve done.

Blue Mountain State: The Rise of Thadland is available On Demand February 2. 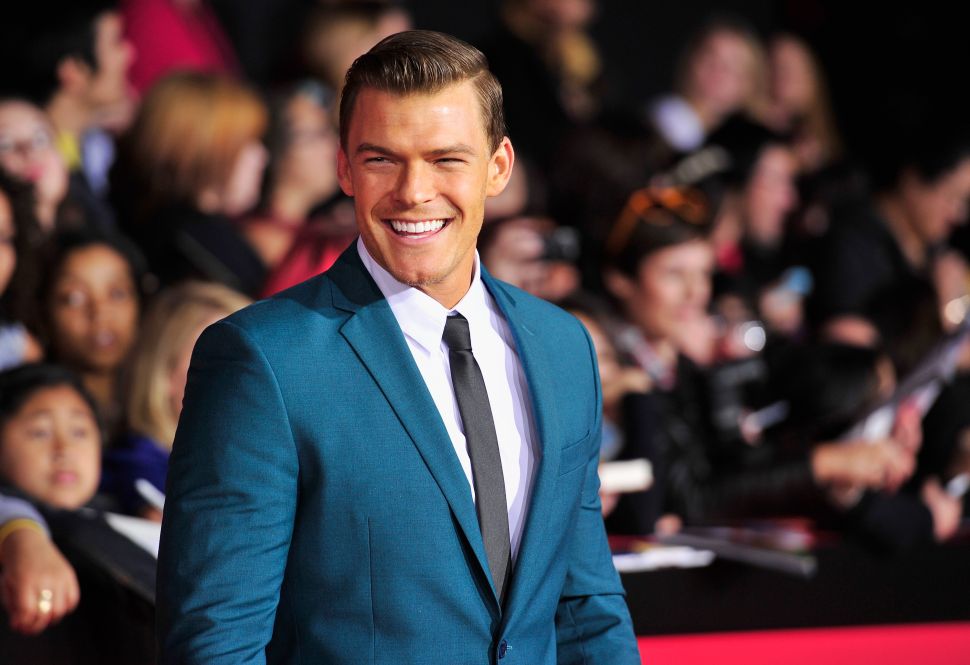