Last week, I wondered why American Crime crawled along, barey heightening its pace for even its most dramatic scenes. This week, the show seemed at least a little less sluggish. It moved along briskly, bouncing from one sequence of action to the next. It seems the show is finally picking up—however, I can’t help but feel that the season could have done with some major edits.

This week’s episode aproved to me how important the Marshall story line is to the rest of the show. Okay, sure. It’s still slightly tangential. But as American Crime delves further and further into the cracks underneath the suburb’s idyllic surface, it seems that Marshall High School serves as a wonderful contrast to Leyland Academy. To be honest, I might be trying to make a point just to defend my new favorite character, Principal Dixon (Elvis Nolasco) of Marshall. He’s the only truly good character on the show. No ulterior motives, no secrets. He just wants to provide a good education and a safe environment for his students. However, the expulsion of three Hispanic students caused the entire Hispanic community—including parents, teachers, and students—to quickly accuse Dixon of racism. The conflict very quickly escalates, and soon, Marshall is picketed by angry students, and Dixon is yelled at by even angrier parents.

Dixon is a man trying to do the right thing, and his good intentions keep the show grounded. Because no one else on American Crime seems quite capable of doing the right thing—most notably, the Leyland administration.

Eric (Joey Pollari) returns to school, although the basketball team is less than pleased. The return is manipulated almost entirely by Headmaster Graham (Felicity Huffman), who is still desperately looking for a way to spin the story. She forces Eric to make a speech upon his return, praising the basketball team and the school for their acceptance. The lukewarm reception is awkward. She recruits a gay writer to write Eric’s speech, which tries to frame him as a gay rights activist and a quasi–martyr. Eric, in turn, hurls homophobic slurs at the writer. The icy response is incredibly awkward.

Ms. Huffman is phenomenally unbearable in these scenes, a trainwreck of desperation that you can’t seem to look away from. A rally for a student who was very, very recently accused of rape? It’s clearly a terrible idea. But she reveals that Lili (Anne Blaine) is suing the school for negligence, and is doing everything she can to frame Taylor’s mother as hysterical and unreliable. Headmaster Graham will do anything to protect her school and her reputable, and Ms. Huffman balances the scenes with grace.

However, she’s far from the only disaster. Not only is his school falling apart, but Eric’s family too can’t seem to hold it together. His mother proclaims she wishes he was dead (in so many, incredibly mean words). His brother is ashamed. His father is a broken man, trying to mend his shattered family life.

Continuing in the line of “people who are doing really poorly” (hey, I never said this show was fun) is Taylor (Connor Jessup). Even his new boyfriend playfully suggests that he’s into a little roughness, clutching at Taylor’s neck. It seems that no one truly believes that Taylor was raped.

Except for, of course, his mother. Lili pursues the case in the form of a lawsuit. Upon hearing that Lili named Kevin (Trevor Jackson) in the suit, Terri (Regina King) confronts her in a rage. The entire confrontation is not shown, but we later see police warning a distraught Terri, hiding in her car, that an altercation had taken place. So, we can assume there was some yelling, and possibly some violence. American Crime usually knows when to cut a scene, but I would actually have loved to see the confrontation in its entirety.

After losing their basketball game and listening to an angry Kevin blame Taylor for the rape and the lawsuit, the rest of the team baits Taylor into showing up to the rec center, where they promptly jump him. Eric, who arranged the meeting, lies awake guiltily.

To close the episode, Michael (Andre L. Benjamin), Kevin’s father, attempts to bribe a policeman, to try to “encourage” Lili to drop the suit. But policemen don’t actually take bribes, do they? They’re definitely not corrupt, right? Right? 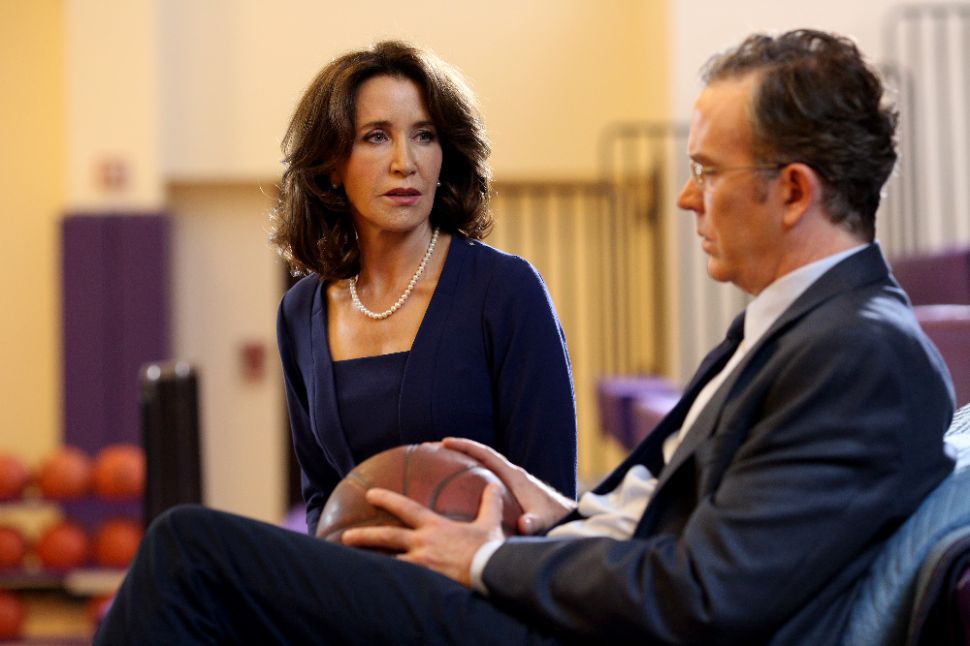