What fresh hell is this? In a kind of demented attempt to shock, provoke and baffle jaded New York theatergoers who only think they’ve seen it all, a lurid lunacy billed as an X-rated Snow White assaults the senses at the Minetta Lane Theatre in Greenwich Village. This is the stuff that could only open quickly in New York (and close even faster)—designed, executed and ludicrously mislabeled as something different. It’s awful, but I wouldn’t say you’ve never seen anything like it before. Outrage is nothing new to a dedicated New Yorker. Remember the one-night Broadway musical Frankenstein? Think about the extravaganza that marked the debut (and demise) of the Cockettes, with drag queens pushing baby carriages while peppering the star-studded opening-night audience with rolled joints and Valiums.

Nothing nearly so entertaining happens at Snow White. You enter, overwhelmed by fog from smoke machines that clog the sinuses and infect the eyeballs. A cluttered stage with more glitter than the Rockefeller Center Christmas Tree. On your left, a humongous glass chandelier in a blue neon frame. On your right, a deserted carousel. And in the center, a scantily clad cast of topless women and bottomless Muscles McGurks writhing in and out of prison cells feigning depraved ecstasy. I guess it’s a combination ballet recital, commedia dell’arte, music-hall revue and tribute to the good old days in the basement of Studio 54 before the police arrived.

Somewhere in the noise and body odor, there’s an avant-garde concept of the fairy tale that would drive Walt Disney to make a citizen’s arrest. Directed by Austin McCormick, a visionary with glaucoma and a choreographer with no particular talent, it’s a malevolent mess of suicidal proportions. While a topless Neanderthal in a black wig wafts in and out of the mire and smoke mumbling incoherently in German, like a throwback to the old cabaret cellars of prewar Berlin, a corps de ballet prances around in the arms of headless mannequins.

Snow White is an incommodious girl with titanic thighs and a shaved head. The seven dwarfs are chorines in Halloween masks and drag queens in high heels and sequined jock straps—vaudeville reimagined by the Marquis de Sade. When in doubt (which is constantly), they lip synch old phonograph records, like “Hemando’s Hideaway” and “My Heart Belongs to Daddy.” After an intermission that mercifully gives a large portion of the audience a chance to head for the exit doors and never come back, the whole thing turns into a bus-and-truck version of the Big Apple Circus, with acrobats dangling from ropes and swirling in metal rings to Eartha Kitt singing “The Day the Circus Left Town.”

O.K., maybe I’m wrong. Maybe you do have to see it to believe it. The costumes by Zane Pihlstrom, enhanced by enough masks to fill a John Carpenter horror film, serve no purpose, but they’re fun to look at. The ghoulish lighting by Jeanette Oi-Suk Yew and the freaky makeup by Sarah Cimino add a dimension of depravity that makes you feel like you’re trapped in a baroque whorehouse with no windows or doors. What does it all mean? Nothing much, I guess. All that imagery without content and freakishness without form just makes the whole thing seem forced and pointless. And talk about false advertising! Despite the efforts of the cast to fake sensuality by shaking their G-strings at the audience, there is nothing remotely X-rated about Snow White.

How long can a debacle like this run on curiosity alone? In my opinion, a limited run of seven weeks is seven weeks too long.

Except for a good but misguided cast that has been goaded into ridiculous, over-the-top mugging, the new Off Broadway play Washer/Dryer is a pleasant enough trifle about the pitfalls of New York real estate and the snafus of co-op boards as notorious bastions of prejudice, racism and homophobia for decades. Michael, a Chinese boy from Westchester, has been married to his Indian girlfriend Sonya for a week already, and the doorman of her co-op building still has to ring her up every day to admit him as a guest. Why? Because his new wife hasn’t told anyone she has a husband. Why? Because she lives in a single-occupancy apartment that is considered a coveted “find.” Why? Because it has its own washer-dryer. And they can’t move, because the building prohibits sublets.

As the plot builds and Michael’s frustration grows, she doesn’t want to break the law, and he resents being treated like a squatter. She’s at the mercy of the building. His rude, difficult, outspoken mother who disapproves of everything dominates him. Every time the doorbell rings, everything has to go into the washer/dryer to hide. To the obnoxious president of the co-op board, Sonya passes Michael off as her gay best friend, which brings on the unwelcome advances of their gay neighbor Sam.

Eventually she has to decide which is more important on the priority list—a lease that comes with a washer/dryer combo, or a marriage vow that comes with a loyal, loving husband who is against the building rules. As silly as it sounds, I have known New York couples forced to face the same dilemma. The comic highlight of the play comes when the snooping white snob from the co-op board (Annie McNamara), the swishy black stereotype (Jamyl Dobson), the Hindu wife (Nandita Shenoy, who also wrote the play), the Chinese husband (an excellent Johnny Wu) and his overbearing mother (Jade Wu) fill the one-room studio at the same time. Laughter is inevitable.

Also inevitable are entirely too many eye-rolling double-takes by all of the actors to milk every comic setup for more humor than necessary, making the characters look more silly and exaggerated than funny. The joke is that New Yorkers will do anything short of murder to land an apartment with extra appliances. It’s an agreeable premise that is not well served by a director (Benjamin Kamine) who doesn’t trust the material enough to let it speak for itself, or a cast overacting at high velocity when subtlety would get happier results. 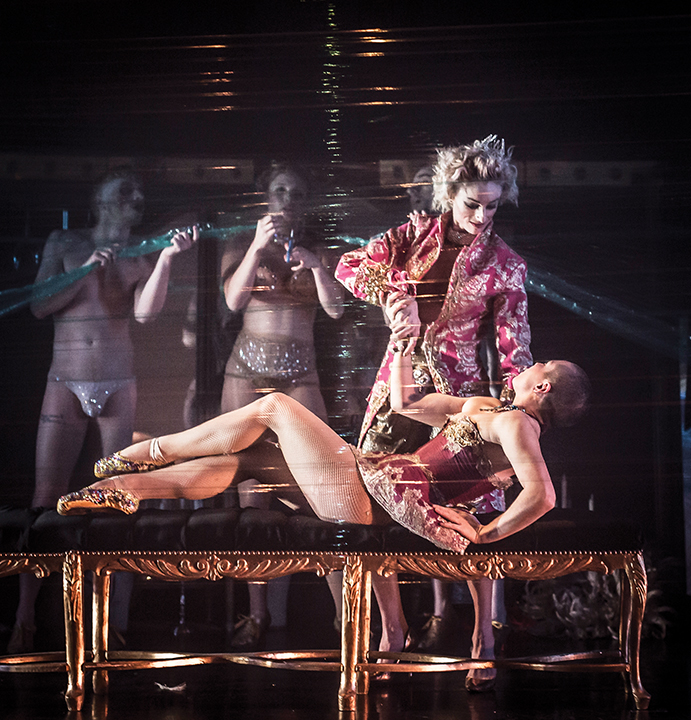