Did you call yourself a founder and try to raise money in the last eight years?

If the answer is yes, then you probably are NOT an entrepreneur.

Let me explain. Starting around 2010, any twenty- or thirty-something with a little stubble, TOMs shoes, and an app idea naively assumed they might be the next Instagram or later, the next Uber. You could overhear them all say, “Why are we waiting around, let’s get some shared space and raise our seed round! I heard an early guy at Facebook wants to advise!”

Guess what, I was one of those guys.

Back in 2010 or 2011, social and mobile was in the air. Buzz, buzz, buzz. I wasn’t satisfied with a regular old run of the mill tech job anymore, and I was getting a little older and more senior. Facebook, Google, or Twitter were lame, and would not do. I wanted the brass ring.

I wanted to found a startup.

Startups were this mysterious passport to not shaving or filling out spreadsheets. But even better, they were a passport to controlling my own destiny. Oh yeah, I could get rich too.

It was new and easy to dig around online and learn about exotic things like cap tables and how to split equity among founders. You could read up on this new site Quora or maybe through someone like Mark Suster, and learn about the finer points of it all.

And once you called yourself a founder, you instantly became somebody. Somebodies like Kevin Systrom were worth a billion, and nobody including your best friend could tell the difference between you and Kevin Systrom. As a twenty- or thirty-something in SF and LA, my life finally had some meaning. My parents and prospective girlfriends didn’t understand, but still approved. I could walk around LA, and even better, gab at parties. You could see people’s eyes light up as you described fantastic roadmaps and big picture world changing impact. That was the best. You could make people believers right then and there. I still remember this guy looking at me at a dinner and him whispering to his girlfriend, “Are you kidding me?! See that guy over there? He gets it. We need to get into this…this is it.” That easy.

And you won’t believe me, but being lazy came with the job! Calling yourself a startup founder is a wonderful excuse to be as lazy as you wanted to be on any given day of the week. I’d be surfing on a weekday, and all of my old big company friends at Google and YouTube would call or text and you could feel the shit-eating envy through the text itself. Hey sorry, yeah I know you have key quarterly objectives to hit, but I need to figure out our cap table and get my surfing in too.

It all appeared so easy, and maybe because it was actually that easy. I helped my old friend and co-worker George get his company going out of his living room in Santa Monica. And before you know it, the rumor was he was raising dough at $100m plus (George ended selling his startup for $300m+ in 2014.) I think we all knew one guy out there like that– the proof all of this was real. And goddammit, if it could happen to him, of course it could happen for me. Obviously I was supposed to be running a startup. Only natural. I’m Ben Smith and people think I’m smart.

And the biggest thing in running a startup was raising money.

Raising money was the only thing that mattered. That was what you talked about, and that was what Twitter talked about. Founder guys would almost recite Paul Graham or Chris Sacca tweets to each other. Tech fight club with stubble. Guys like Sacca and Graham were Blake and Adam. Funding gossip became a full blown fetish.

Raising money meant you were not bullshitting your own little voice inside yourself, even if every so often it felt like maybe you were bullshitting others too. But it was way worse than that.

How much money you raised told you exactly how good a person you are.

If you had been telling anybody that could listen you are a startup founder, then the big round of investment was the pot of gold at the end of the rainbow. The validation. You could share more Facebook and Instagram photos subtly telling your other loser founder buddies that if you are not drinking $15 juice and sharing work space, you’re probably not happy and satisfied with yourself deep down inside those nice yoga pants. Happy life.

Quickly, let’s review how all of this happened. After the 2008 recession, a glut of investment dollars (due to zero interest rates) came into tech searching for mega returns. At the same time, we had a mobile and social revolution in progress. Everybody on planet earth needed to buy an iPhone, so the sky was the limit in terms of what apps could be imagined and built to support this colossal change.

So everybody and your cousin suddenly dreamt up great ideas for a killer app. The barrier to entry was disturbingly low. But even better, all of the investment dollars were there and apparently ready to fund it all. In fact, in the investment community, they sometimes call it the “cousin meeting.” Everybody has a cousin or a friend’s cousin with a supposedly can’t miss idea for an app. Things were cruising along, and then Instagram happened. Instagram was worth a billion, and you and your friends were thinking about photo sharing apps too?! Amazing. The natural conclusion was to go chase the gold. Cousin meetings galore.

Notice how we haven’t even talked about actual business or the nuts and bolts of product? That was probably the last thing anybody wanted to talk about at that time. It always came back to the funding.

Like most founders from this time, I was pretty lousy at raising money. I was pissed and so envious of everybody around me. It felt like money was showered on people when I was raising back in 2012. But not for me.

And even worse, if you were part of an accelerator (another funding fad), you saw teams and teams of similar goobers getting millions in dough…just not you. Spin again for enlightenment, please. I know I wasn’t alone. There is a familiar look on the face of a founder when you ask how it’s going during a raise. It’s so subtle. 99 out of 100 muggle civilians will miss it. But once you know the agony of smiling and being miserable and talking about your round, it’s unmistakable. Whenever I now see it, it just makes me wince. Pure agony.

Fast forward a year or two, and the cycle appears to be over. It’s complicated, but basically all the low-interest investment money that was parked in private companies is causing problems up and down the chain. What you need to know is this is the time when things gets bumpy. Reality is back! It’s especially a mind bender for the start-up generation because this has been going on long enough that we feel like it has always been this way.

All of the founders left standing are realizing they won’t create the next killer service. Even those startups that raised legitimate dough can’t pretend they are Uber when there is no dumber money left. And you can’t pretend you’re building a sexy-ass unicorn when unicorns are indeed mostly fictional.

I was one of the lucky ones and ultimately had a small exit (a.k.a. acquihire). But before we clink glasses, let me say that the scars are there for life. The daily reality of entrepreneurship has worn on me and everybody else. We didn’t sign up for backbreaking hours. Terrible health issues. Strained relationships, and the pressure to always say things are good. But more than anything, we’re all sick of the constant FOMO envy.

Now is a great time to admit you are not an entrepreneur.

All guys like me have known is chasing the ring. The last forty years of US culture have reinforced that all of the glory is in fame and fortune, and mostly in working like a maniac. If you’re not chasing, what’s left? I’ve been lucky enough to find happiness in the void, in the daily routine. It took me a few years away from startups to finally realize happiness is mostly internal, and has nearly nothing to do with achievement or acquisition. It’s a really hard thing to learn. Ironically, I now have some FOMO about myself of all things. How I could have used those raising years in a way that a more authentic me wanted? I’ll never know. But mostly, I don’t worry as much anymore about getting rich and being smart.

Things will change. It’s clear the time is now to teach job fulfillment in a new way to a generation of talented overachievers who are looking for answers. Finding enjoyment in the slow, day to day work itself is indeed valuable, and millennials’ fascination with mindfulness and one of a kind events will serve us well as we transition away from startup fantasy.

It’s worth noting that the lessons of the value of teams and teamwork are one of the great takeaways from all of this era. We all had to learn how to recruit, retain, and then stay together with our crew out of necessity. These skills are important and vital in this new work economy. We should see small, project-based teamwork flourish, as we all find our way to more corporate workplaces.

I suspect we will look back at this time and laugh at ourselves for believing nirvana could come from venture rounds and convertible notes. Finding purpose in life is always a difficult task, and for those of us who bought this startup dream, now is the time to look around and adjust to a non-cap table life.

Are you an entrepreneur? I didn’t think so.

Ben is an active VR investor and advisor, based in Los Angeles. Ben was an early Google and YouTube exec, and has founded and led multiple venture backed video startups. His monthly profiles on “why people are great at what they do” are found here. 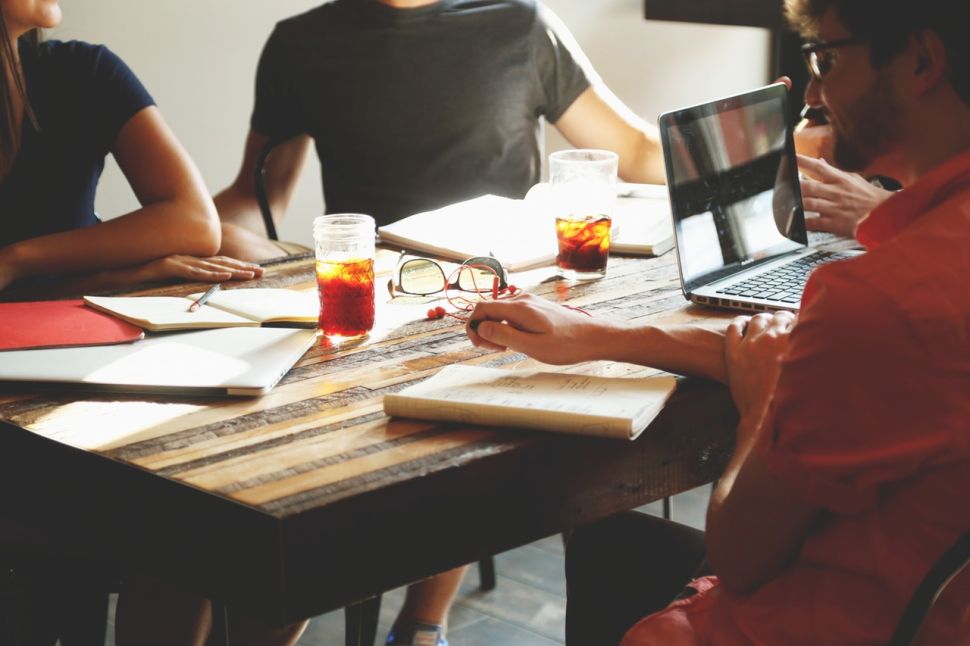