Previously on “Ask a Casting Director…”

Linda Lamontagne might have one of the most fun jobs in Hollywood: as the casting director for animated series like Bojack Horseman, Family Guy, American Dad, Robot Chicken, and most of you other favorite adult-themed cartoon, she’s responsible for casting a wide, wide net in search of the best– and funniest– voices in the biz.

Observer: How did you get your start in casting?

Linda Lamontagne: I got my start with a gal named Karen Vice, who was phenomenal. She had come up off of Moonlighting. Her first show after that was called Capital News, by Mark Tinker. She gave me my start.

Prior to that, I had worked at a talent agency and also distribution companies, but I had decided that I loved casting. I liked fitting talent to buyers…what we called casting directors at the time, at least in commercials.

I remember thinking “Wow…yeah, let me find you more beautiful women.” At this point, I was limited to the people we represented. I thought “Wouldn’t it be great if I could search the world or the universe for the right person?” That always seemed so fun to me.

“When I have people audition for me, they don’t read one part, they read every female part, or every male part, or I cross-gender them.”

It took me a year to break into casting. At the time, there was no Internet, it was basically a small office for the Casting Society of America. I found them, gave them a stack of my resumes, which apparently no one had done before.

So after a year where I had been working at Weintraub and Island Film and all these other distribution offices of companies, I got this call out of the blue from Karen Vice. She said, “I got your resume, how did you know to drop it off at the CSA?” And I said it would seem to make sense; that if casting directors needed help, they would go there first. Because it used to be that they would just call friends in the industry and say “Hey, do you know anybody?” It was all word of mouth.

Karen was my sole employer for a very long time. We did Capital News, and then we moved into Roseanne. From the third season to seventh episode of the last season. A good seven and a half year run. Then I worked on Cybil. We did the pilot and the four seasons of that show. Get Real was a one-hour that launched Annie Hathaway and Jesse Eisenberg. We didn’t do the pilot so we didn’t find them, but they were series regulars.

I do a lot of animation right now: Family Guy, American Dad, Bojack Horseman, SuperMansion, Skylanders, which is new. I’m also working on Family Guy mobile game, Avengers Academy mobile game. I worked on Angry Birds, the feature film that is coming out next year.

Observer: So what got you into doing animation and voice acting?

Lamontagne: Honestly, one hiatus during Roseanne, I went and worked for Alice Cassidy, a casting director working on something called The Last Halloween for CBS. It actually won an Emmy, but I didn’t find it out until three years ago! Animation takes so long to do, that by the time it’s done you’re off doing something else. It takes about nine months to a year.

Bojack is unusual. It’s a seven month production window. It’s one of the fastest 2-D animation shows I’ve worked on, ever.

But after The Last Halloween, Family Guy came down the pike. What’s so amazing about (voice casting) is that you can cast anybody. The world is your oyster. You aren’t limited to what someone looks like.

They need to be able to act alone, though. Most of the time, on the shows I work on, the actors record singularly, not with other people. They are in a booth, by themselves, and they need to be able to create that world. Raphael (Bob-Waksberg, the creator of Bojack) is an amazing director, he really lets the actor bring their own take. Seth Green is the same way, with Robot Chicken. They pull the best out of their actors.

I do most of the casting for Adult Swim shorts. And for those, I do MASSIVE auditions. When I have people audition for me, they don’t read one part, they read every female part, or every male part, or I cross-gender them. That’s to see what they can bring to the role, comedy-wise, but also what they can do vocally.

“My thing is: if you’re willing to lay down tracks and send in a tape, I’m willing to listen to anybody.”

Observer: So when you are auditioning people, what do you look for?

Lamontagne: I physically don’t look..not at them, believe it or not. People can self-record and send it to me, which is huge, because I can scout from anywhere. I search all over the world. Right now, I’m looking for someone who can do a Tonga accent, and that’s not easy. And for American Dad, two weeks ago, they were looking for someone with an Inuit accent. And that really wasn’t easy. I found two guys in Bethel, Alaska. One happens to be a singer, and the other was a professor. So I had them record in their native tongue, and they had to translate the dialogue we gave to them and deliver vocally what our writers/producers wanted. What they wanted was a “typical Eskimo-sounding person,” with different registers and voices. So I knew the singer would be able to modulate his register; the other one, when I spoke to him on the phone, I knew he was the voice.

That was interesting, that was one of those “Up all night, searching the Internet for anything I could latch onto” situations.

Observer: So many voice actors do more than one character. How do you find people who can do that?

Lamontagne: For the most part, I tend to keep a database of people. I’m a big fan of searching for people on chat shows like Late Night and The Late Show and Kimmel and Seth Meyers. Marc Maron’s show. Or if they are doing stand-up (on the late shows). This way I get a sense of their personality, and sometimes they really play: they’ll do a voice, or they’ll mimic or impersonate someone. I get a better sense watching those shows if there is any kind of a vocal range there.

What I love about voice acting is that everyone is game to try new things. And if you are game, I’ll be able to find a place to use you.

Observer: I watch enough cartoon shows that I actually have that thing that people get usually when they see an actor they recognize but can’t name them. I’ll say “Oh, I know that voice! He plays the smarmy cat on that other show!”

Lamontagne: Or you start hearing them in commercials voice-overs. That happens a lot.

Observer: Someone like, say, a Chris Parnell, is very recognizable in his voice.

Lamontagne: Chris is fantastic. He’s a chameleon, too. I love the ones where it’s a complete surprise by what they bring to it. Or an actor that you find out later had this amazing New York voiceover career. Like Liev Schreiber! He has an AMAZING voice and used to do radio commercials.

Observer: Any other examples?

Lamontagne: Paget Brewster. She’s my go-to gal if I have to recast something quickly or we’re about to go to picture. People mostly know her for drama, maybe some comedies, but she’s a chameleon. And her voice cuts so clear in a booth.

Alan Tudyk. He can do anything. I used to do this show, Glenn Martin, DDS. It was stop-motion animation out of Toronto, about a family–this dentist and his wife and an adopted girl– that lived in an RV and traveled all over the place. It was Kevin Nealon, Catherine O’Hara, Judy Greer. And Alan played this Korean guy with a tiny little hand. So now whenever I think of Alan, I think of that Korean voice.

Stanley Tucci…he’s phenomenal. And he recorded Bojack from afar, which is a great thing about this job. I got David Thewlis recording something in London. Melissa Leo recording for Bojack. Cate Blanchett recording as Stewie’s nemesis on Family Guy. They can record from anywhere.

Observer: Do you listen to podcasts to find talent?

Lamontagne: I wish I could say yes, but I just don’t have time. My thing is: if you’re willing to lay down tracks and send in a tape, I’m willing to listen to anybody.

Observer: So say someone *cough cough* is interested in voice acting. How should they go about it?

Lamontagne: I can send you sides! Usually I send out sides to shows that I’m casting. Cartoon Network shows, I have a couple months to cast them for series regulars. And I seriously search all over the world. I send it out everywhere. Sides are the things I usually send out because they are short, and I have very specific directions on how to label and send things to me.

I keep myself open. I say, “If you don’t understand the material, call me. I’ll walk you through it. I’ll read you in.” If they are in my office, I “Miles Davis” them. That’s what I call it…I won’t look at them. My back is to them and they speak into a microphone behind me.

Observer: You’re The Voice-ing them!

Lamontagne: It’s so cool, it’s such a good gig. And for the amount of time an actor is in a booth, it’s really minimal. Even with features…sometimes you’d be there for two hours, but there’d be a break. But in TV, it’s so fast, because they record the voice first, and then animate to the voice.

Unless it’s something very last minute, or we have to sub someone in. We didn’t know if we could get Sir Paul McCartney for Bojack. It took a long time to get him, but it was so worth it in the end. That was a scenario where he was recording from his own place in New York, where we had to send an engineer with a DAT to set up and record him. Of course, the engineer I sent was over the moon. Who wouldn’t be? 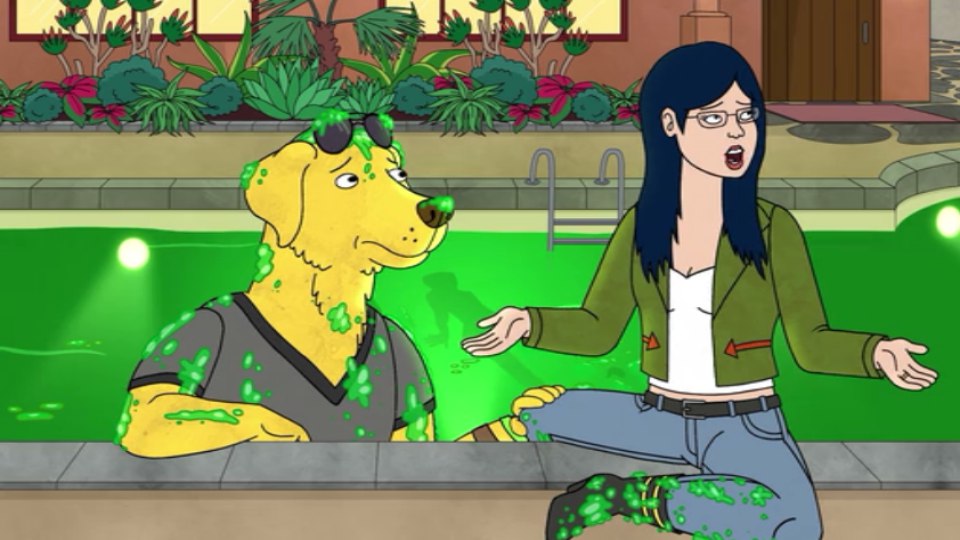