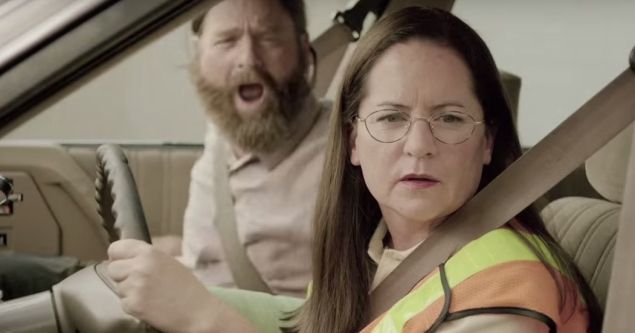 Over the last week I’ve been thinking about the dynamic between Chip and Martha, about how much of the humor in this series stems from his cruelty to her, and her blind devotion to him regardless. Not that Chip is inhumanly cruel, he’s not burning her with a hot wire or anything…but he certainly treats Martha like a gross idiot.

Is this a problem? I haven’t heard anyone complain, but I could imagine someone finding the relationship troubling. Especially if Martha is in love with Chip, but that’s hard to figure out. She told his mother there’s no ‘sex vibe’ between them, but didn’t seem averse to the two of them having sex on her ottoman after Chip’s wife, Penelope, suggested as much last week.

Their relationship doesn’t bother me that much. Chip’s bitterness is so clearly driven by extreme sadness and self-loathing that it’s hard to take any insult he tosses Martha’s way seriously, and Martha doesn’t seem to mind. And this latest episode does a good job of digging into what brings them together. Early on, both sort of question whether Martha somehow works for Chip now and Martha suggests that maybe they’re actually just friends, to which Chip replies “TBD” and tasks her with posting an advertisement for his clowning services in the Yellow Pages. By the end of the episode, their relationship is a lot more fleshed out and almost sweet, although someone with a healthier psychological viewpoint than mine might disagree.

Following the incredible windfall of a $900 insurance check, Chip decides to make a play to get his wife back. Martha drives him to Penelope’s hotel, and on the way tries to interest him in a story about Boots, the troublesome stray dog she’s taken in. Chip couldn’t care less. At Penelope’s place he meets her new boyfriend, the handsome, perpetually shirtless farmboy Ben. Chip invites Penelope to dinner but she can’t go because her and Ben are planning to watch Jumanji on the television Ben bought her that evening, which inspires Chip to prove his worth, or something, by purchasing Penelope a television as well.

The exact same television, in fact, only outfitted with 4K HD, technology so advanced that the only thing it can show is a demo for itself. Penelope is unimpressed, Ben gives Chip a hard sell on trying some nectarines, and then seems unperturbed when he catches Chip trying to slash the tires on his truck. He refers to Chip as “a grumpy little guy,” which has got to be the worst thing someone sleeping with your wife can call you.

Meanwhile, Martha continues her struggle with Boots. The clerk at the pet store—possibly the only reasonable human being yet to appear on this series—suggests that Martha send the dog to a nearby shelter, but Martha won’t hear of it. She’s concerned that if she gives up on Boots he’ll never turn his life around, that without her influence he might end up eating a baby. Back home she discovers that Boots has destroyed her apartment and eaten her fish, Samantha, but before she has a chance to deal with what’s happening Chip calls her for a pick-up, at which point the metaphor at work here seems so on the nose that even the fine folks who wrote some of The Leftovers most obvious moments might groan.

Martha brings Chip back to her place, and my favorite joke in the episode comes when Chip, still oblivious to Martha’s situation, surveys the destruction he finds there and asks her “What kind of mental disease is this?” before finally listening to her and then quickly identifying Boots as not a lost dog in need of love but instead a coyote. “He’s a wild animal,” Chip tells her, “he was born lost.”

The two take Boots to a wildlife refuge to set him free, and Chip delivers a monologue that for a moment seems to be working that big obvious metaphor so hard that I was afraid my screen might crack but then, suddenly, kind of works. And it’s because Chip quickly identifies the coyote as a metaphor for himself, which is the kind of thing that Eastbound and Down brilliantly lampooned every episode, as Kenny Powers believed the entirety of the physical universe to be engaged in a narrative in which he was the main character, but is actually pretty moving here, especially when Chip talks about how he’s “stuck in this world,” and that “it feels good to know where you belong, because if you don’t know where you belong then you’re on the side of the road having a conversation with a coyote.”

Yes, it’s ridiculous. But Zach Galifianakis plays it straight, lets such anguish leak into his voice, and it really worked for me. So many comedic actors screw up when they’re playing something straight by eliminating whatever it is that makes them compelling when they’re being funny (think about numb, mopey Jonah Hill in True Story or low energy, melodramatic Jim Carrey in a bunch of stuff) but Galifianakis never loses his weird edge, his rage, he just turns it inward. I mean, at the end of the day the scene is still depicting a clown shouting at a coyote, but it was as moving as that could be.

Afterwards, Chip and Martha ride home and actually get along. He’s almost charming, teasing her about the whole adventure, and she offers to do anything “kind of within the law” to get Ben away from Penelope.

The episode ends with Chip riding a coyote-inspired epiphany about his place in the universe over to Penelope’s, where he attempts to deliver a farewell speech while she to splashes around in a swimming pool. She shuts him down, tells him she’s done with Ben, and insists that he swim with her. He flops into the pool and they frolic for a moment before Chip dives deep, comes up for air, and discovers that she’s gone, that he’s in the pool alone.

For a healthy person, this would be a “she got me again” moment. For Chip Baskets, and considering that there’s more than half a season’s worth of episodes to go, it reads as though he knows she got him again and that he’ll never stop letting her.

He goes back to Martha, who’s waiting in her car, and the episode ends with the two of them together, still probably not quite friends but maybe a little closer than they were before. 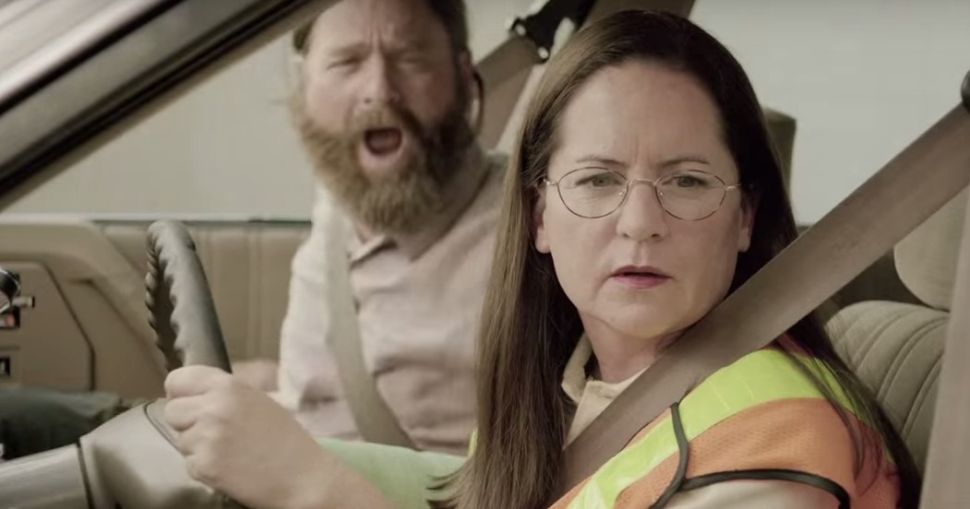