I want to get out of the way real quick that I’m pretty sure that David Hornsby, who plays the frequently mutilated degenerate former clergyman Rickety Cricket on It’s Always Sunny in Philadelphia, plays the pastor of Christine Baskets’ church this week…which gets me thinking about the possibility that Baskets and Sunny might exist in some kind of FX network shared universe. So is Baskets a prequel, as Cricket seems to be relatively unscarred here, or a sequel taking place in a future world where Crick gets his life together and undergoes some really impressive plastic surgery?

Okay, moving on. This week it’s Easter in Bakersfield, and while Chip would prefer to spend the day mooning over Penelope, studying French, and smoking cigarettes, his mother gives him very little choice in participating in the festivities. She crams him a suit, drags him to church—which he disrupts in order to warn her that her car might be getting towed due to him basically daring some church official to do so—and then brunch, where they run into Martha and her mother and father.

So, okay—miserable, pretentious clown getting dragged around by his super intense, super weird mother (played by Louie Anderson) makes this sound like the perfect set-up for some big comedic payoff…but this episode is largely very sad.

Of course, Baskets is frequently a very sad show, but this one is also the least funny, or interested in being funny, and more than any other seems right in line with the vibe that executive producer Louis CK started exploring in his own eponymous FX series, and has continued in his latest venture, the self-produced/written/directed/distributed series Horace and Pete.  It’s tempting to articulate the connective tissue as Louis questioning whether a comedy needs to actually be funny…but that doesn’t really make any sense, come to think of it. And anyway, Horace and Pete isn’t primarily a comedy, and it’s debatable whether Louis was. It might be too soon to say on Baskets.

Maybe what’s happening here isn’t questioning whether a comedy needs to be funny, maybe it’s more to do with whether the people making what is ostensibly a comedy have a responsibility to accommodate an audience’s expectations. I think what we’re seeing on Baskets this week is the result of the writer’s wanting to tell an honest story about feeling trapped, dealing with family, and longing for another life without any restrictions or muddying it all up with too many jokes.

I feel like every week I have to take a moment to point out that something funny happened on this show, so let me say that there are some good laughs here… the pastor reminding everyone that the chocolate in a candy egg represents Jesus, the content of the French lessons Chip listens to on his headphones, Christine Baskets bragging that her adopted twins recently flew first class, all funny. But there are also the bits where Chip flashes from Bakersfield to Paris, picturing himself wandering through the night, revisiting the first time he saw Penelope. There’s an ache in these moments that’s completely real and absolutely relatable and pretty damn far from funny.

Which, by the way, is a feat considering that he’s dressed like a fucking clown in those scenes. And that’s another interesting thing that I see originating with Louis CK—a scene working within the typical rhythms of a comedy but then either failing to rise to the joke or else swerving towards serious unexpectedly. And I guess that fits well here, given that our star is a heavyhearted clown, who should be making everyone laugh but can’t manage it.

That reminds me of my favorite scene this week, when the little kid outside the church approaches Chip for some clowning only for Chip to realize that the kid is mistaking him for his twin brother, Dale. The Dale character is so broad and strange even within the world of Baskets, I really can’t wait for an episode devoted to him.

And then we come to brunch, The Baskets’ clan mushed up on Martha and her parents. Martha pisses Chip off by mentioning that he’s married, which brings the hostility that’s been brewing between him and his mother all season to a head, and Chip retaliates by telling Martha that she’s a goof, that her whole life is a goof, that her parents’ are goofy, and storming off. It’s the cruelest shit we’ve seen the character pull by far, especially after last week when it seemed like he and Martha were starting to form a bond. I guess it could have been worse, being called a ‘goof’ is pretty tame as far as insults go, but the moment is just devastating, there’s nothing funny about it, and it doesn’t even resolve. Chip never goes back to apologize, Martha never turns the tables and makes it clear that Chip is the goof…none of the stuff happens that you want or expect from a show that’s supposed to be making you laugh.

Which in a weird way makes this my favorite episode of the series so far, because I think there’s something…not brave…maybe risky? about the entire thing. There are lots of great shows with terrible monster leading men, but think about Mad Men—Don Draper was often a complete bastard but he was also so good at his job and passionate and people in the Mad Men world worshiped him. Chip Baskets is bad at everything and incredibly mean to the only person who’s nice to him. I guess he’s kind of nice to his mother at the end of the episode, or at least we get a scene that establishes that there’s more sympathy between them than we’ve previously seen, but ultimately I don’t know if Chip is relatable to anyone who doesn’t suffer some kind of depression.

I really would like to see him mix it up with the Paddy’s Pub crew from Sunny. Have Chip spend a night in Charlie and Frank’s apartment gobbling cat food, or maybe he can take ever-aspiring comedian Sweet D under his wing and teach her a couple routines. And then the crew from The Americans shows up and the real adventure begins… 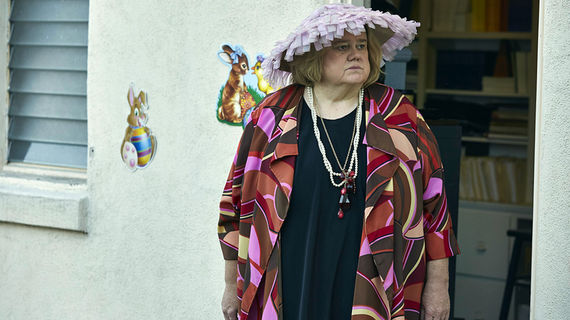