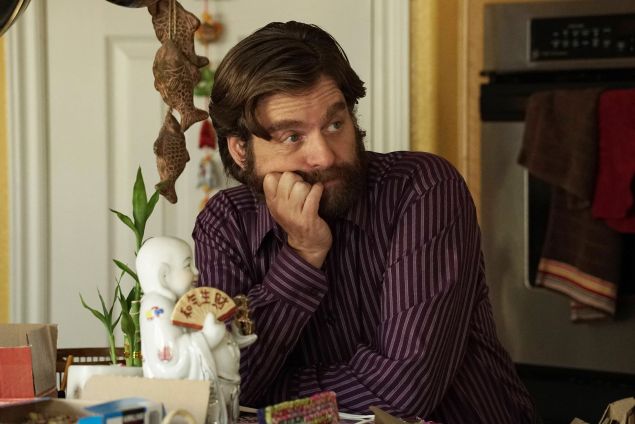 Last week Baskets delivered a pretty sad episode that also managed to be the best of the season so far. This week it’s really funny and even better. Pretty cool!

There have been some hints as to the strange culture and customs associated with the rodeo where Chip works, but this week opens with the oddest event yet—the ‘sacred slaughter ritual,’ where employees call out their desired cuts of meat before an old bull is put down. Chip is willing to settle for a slice of meatloaf but ends up with a horrible pile of gristle, instead, which he takes home to microwave and is about to dig into when his twin brother Dale calls with a problem. Seems he’s got a line of a prime hutch and wants their mother, Christine, to watch his kids. Christine’s not around, so Dale’s wife suggests that Chip babysit, and after explaining that he’d be acting more as an uncle than their father, he happily accepts the gig.

I love Dale Baskets so much. He’s such a petty, weird tyrant, instructing Chip not to sit on any of the furniture in his home and flying off the handle upon discovering his daughter has been keeping Twizzlers in the fridge. He’s got all of Chip’s nastiness without any of the redemptive misery.

Chip recruits Martha to help him pick up the girls and after wandering around their school declaring his credentials as an uncle he finds them and loads them into Martha’s car, so excited at the responsibility of their care that he kind of glosses over the older one—Sara, I think—making some troubling declarations about her desire to end her own life.

Yeah, this is probably the funniest episode of Baskets so far and it has a running joke about teenage suicidal ideation, because it’s still Baskets.

At home, Martha worries about whether Dale and his wife have a designated hot dog boiling pot and Chip finally notices Sara’s misery and decides to take action. It’s a very different Chip we’re getting, this week, this man who is capable of recognizing sadness in others, who wants to help. Unless what we’re getting is Chip wanting to show his brother he’s capable of doing something right, especially after Sara says that if her dad was around he’d only make things worse. And he’s still pretty nasty to Martha, although the running gag where he perceives her every utterance as being at a deafening volume is way less pointed that the abuse he typically tosses her way.

Meanwhile, Christine Baskets goes to check out Chip’s wife Penelope, taking her on a tour of Bakersfield which includes some heavy discussion of Arby’s, a trip to Costco, and a visit to what’s either her deceased husband’s grave or a plaque in his honor, hopefully more a plaque since it’s in a rubble-strewn field under the bridge he fell from. Sabina Sciubba, who plays Penelope, is great in all these scenes, playing bemused at Christine’s enthusiasm for antacid and dropping rude asides and quips without any real venom, as though it’s all so beneath her that she can’t be bothered to work up the energy to really feel disdain so she feigns it instead. When she explains her green card arrangement with Chip over burgers and California wine, she’s so casual in telling Christine that it’s really not her problem if Chip can’t rein in his feelings that for a second I was willing to see her side.

But just for a second, and Christine isn’t into the idea at all, cleverly contacting Penelope’s father and arranging for her exile back to Paris.  Five weeks ago it seemed like casting Louie Anderson as the matriarch of the Baskets family was a great stunt, and Louie’s been really funny in the role, wonderfully withering to Chip and radiant when rhapsodizing about energy drinks and curly fries, but over the last two episodes he’s been given some actual drama to play, and he’s let this wonderful warmth and pathos creep into the performance. It’s actually really remarkable. When Christine tells Penelope about how Chip threw himself into clowning to cope with his father’s death, for a second I forgot I was looking at a man in a wig in a dirty lot, I was looking at a character expressing real fondness for her son, trying to connect with his wife. It’s moving when she asks Penelope not to hurt him, and devastating when Penelope responds that she couldn’t make him any worse.

Chip, Martha, and the kids confront the family of the girl giving Sara a hard time, and it all ends up being too complicated to really make sense of, which isn’t helped by all the adults getting sidetracked discussing koosh balls (Martha has one in her purse, but it’s unfortunately only a mini). They head home in defeat until the younger daughter bursts out in tears and explains that she’s upset because everyone laughed at her dancing in class that afternoon, and Chip locks in—being laughed at is something he knows he can handle.

The next bit, where Chip watches his niece dance and explains that it’s all right that she’s awful, that she can own being awful and play it up and turn her classmates’ laughter into a reward, is super sweet and incredibly revealing about why Chip is the way he is, probably. He’s a man anxious to control the way he’s perceived and desperate for control, and suddenly the fact that as a clown he’s got more talent for being rammed by a bull then subtle artistry rooted in centuries of artistic tradition is even sadder than before. He really does make his niece feel better though, and the dinner scene where they all dig into hot dogs and rice pilaf is the happiest we’ve seen the character.

Chip being Chip, though, he rides this happiness to a false epiphany about how he might be a good father, and calls Penelope to ask her to start a family with him just as she’s about to board a plane back to France. I’ve enjoyed Penelope but I’m not sad to see her go, the show has leaned pretty hard on plotting episodes around Chip trying to win her approval and it’ll be interesting to see what motivates him without her around.

And I can’t wait to see how he reacts when he finds out that Christine sent her away. 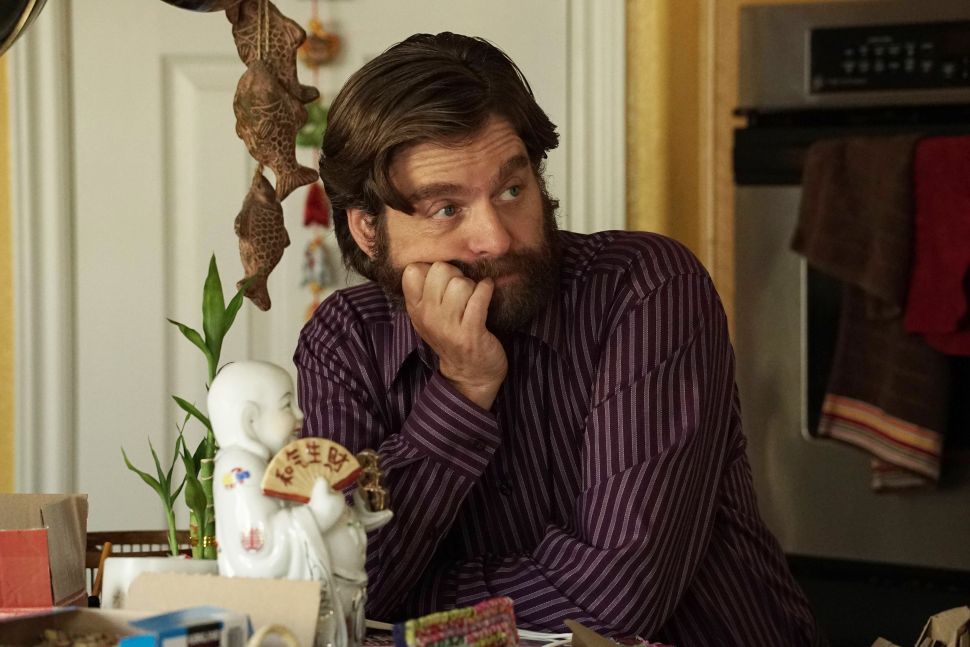