Supporters of Sen. Bernie Sanders’ presidential campaign gathered on the steps of City Hall this afternoon to announce that they collected about 85,000 signatures for the Brooklyn native to appear on the ballot in New York State.

Presidential candidates only need 5,000 signatures to make the ballot, with 500 from each congressional district, meaning Mr. Sanders is all but certain to appear on the Democratic ballot for the April 19 primary.

Arthur Schwartz, a lawyer for the Sanders campaign, claimed they used no paid petitioners, unlike the Clinton campaign.

“Nobody got paid to do this. This campaign is a grassroots campaign,” he said. “The joy that they got from people in responding to their requests that they sign for Bernie has only spurred people on to do more.”

A Clinton spokesman shot back that this claim was “untrue,” characterizing their signature gathering process as an all-volunteer effort. Mr. Schwartz said he had seen Clinton ads asking for paid petition gatherers, but offered no proof of this.

Mr. Sanders, a Vermont independent, narrowly lost to Hillary Clinton in Iowa on Monday, but many supports saw his performance as proof that his progressive campaign could resonate with voters nationwide. In New York, which will allocate the second-most delegates in the country, Ms. Clinton remains a heavy favorite, well known from her tenure as a U.S. senator. Virtually the entire political establishment, from Gov. Andrew Cuomo to Mayor Bill de Blasio, is united around Ms. Clinton’s candidacy.

But there are elected officials and activists on the left who are sticking with the Vermont senator. Councilman Rafael Espinal of Brooklyn and Bill Lipton, the New York director of the Working Families Party, which is close to the Democratic establishment but backed Mr. Sanders, spoke out in support of the self-described democratic socialist today. Former Manhattan State Senator Tom Duane and several local labor leaders and political clubs joined them.

“We have a candidate who’s actually talking to the issues that affect the communities I represent. That’s the African-American and Latino communities where people every day have to struggle to put food on their table, where people every day have to struggle to have an apartment to live in,” Mr. Espinal said. “You know people thought I was crazy early on, saying, ‘how could you support someone who has no chance at winning?’ But I think we’ve proven in Iowa we have a real good chance at winning.”

“He has the courage to tell the truth and because he knows exactly who he represents: the working families of this great country,” Mr. Lipton said. “Bernie Sanders is absolutely right when he says it’s gonna take a political revolution to make the real change working families need.”

Most of the speakers refrained from attacking Ms. Clinton head-on, though Allen Roskoff, the president of the Jim Owles Liberal Democratic Club, said the former first lady has a shoddy record on LGBT rights and urged the “gay establishment” to buck her for Mr. Sanders.

“She is perhaps the last prominent Democrat to support marriage equality. We have to remember who our friends are,” he said. “When the wealthy establishment LGBT community campaigns for Hillary with their checkbooks, remember the grassroots will vote for Bernie Sanders.” 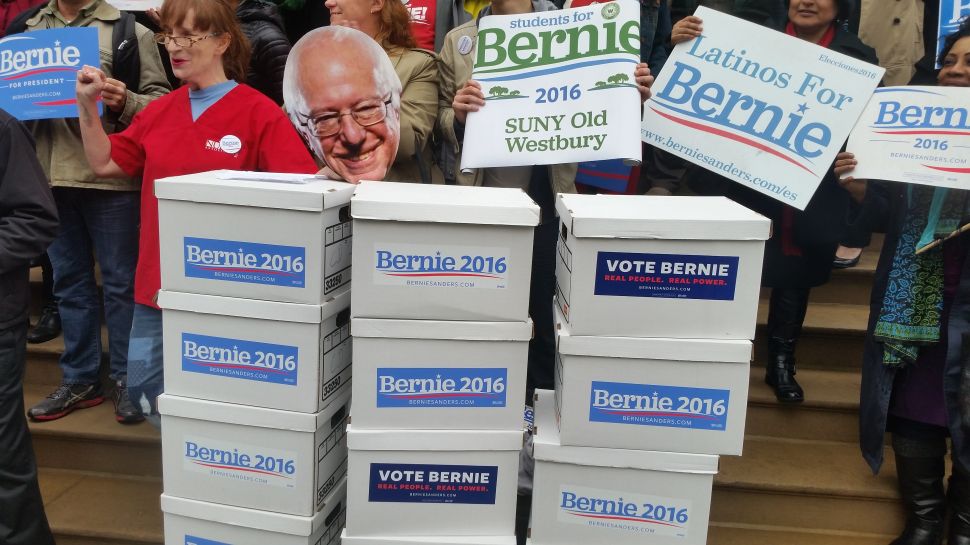