Better Call Saul has a Mike problem. Granted, this is what Marlo Stanfield from The Wire would refer to as “one of them good problems,” but a problem it remains. Simply put: No matter how thoughtfully composed the shots, no matter how refined the acting from the show’s cast of largely comic talents gone dramatic with excellent results, no matter how strong a character Jimmy McGill remains—when Jonathan Banks is on screen as Mike Ehrmantraut, there’s no one else you’d rather be watching.

At least that’s how it felt to me in “The Cobbler,” the second episode of BCS’s second season. Perhaps it’s because the welcome-back moood of the premiere has now given way, as it has to, to the basic incremental advancement of the plot. But as Jimmy settles into his new job as an attorney at the tony Santa Fe law firm Davis & Main, his segments of the show will naturally take place in the thrill-a-minute-world of discussing class-action lawsuits about nursing homes in conference rooms with men in mediocre suits. And like, you don’t cast Ed Begley Jr. and his acoustic guitar to keep people on the edge of their seats, you know? This is vibe is intended to be vanilla as hell, and it succeeds all too well.

Now you can get some lovely moments out of this world, sure, as we did when the sudden arrival of Jimmy’s spiteful older brother Chuck (a fantastic Michael McKean, who sat out the pilot) flustered his presentation until his girlfriend Kim put a comforting hand on his knee and set him back on track. A few glances, gestures, and pointed refusals to make eye contact, and you learned volumes about where these three characters now sit in relation to one another, and how the other members of the firms see them too. But does it compete with a grizzled ex-cop whose pulse rate never seems to go above 80 doling out criminal wisdom through a voice like an industrial sander? Hell no.

And Mike’s material is strong even by his own standards. His dynamic with Daniel Wormald, the clueless nebbish who decided he no longer needed Ehrmantraut’s services during his drug deals and wound up getting robbed blind for it, is exasperatingly entertaining enough to come with the Curb Your Enthusiasm soundtrack. (It helps that despite Dan’s ridiculousness, comedian Mark Proksch is convincingly nerdy enough never to cross into the cartoonish realm of the Kettlemans, the equivalent figures in Season One.) Listening to Mike deliver deadpan advice like “It’s probably a bad idea that you willingly talked to the police, being a criminal and all,” is frustrating mounting by the moment as this dude threatens to risk both their freedoms over baseball cards, is a consummate pleasure. And it’s worth pointing out that in deciding to help reclaim the cards only after Dan reveals some of them belonged to his dad, we catch a glimpse of the tragic father-and-son backstory we learned about Mike in Season One’s strongest episode.

Mike is equally enjoyable to watch with Nacho Varga, the drug dealer whose relationship with Dan constitutes an off-the-books bit of moonlighting from both his dayjob at his father’s fabric shop and his main career in the employ of mercurial meth mogul Tuco Salamanca. When Mike shows up at Nacho’s work to try to get the cards back, we spend several minutes simply watching the two of them go through the motions of customer and salesman, with the drugrunner’s not-quite-bilingual father in the middle, and it’s weirdly riveting. Michael Mando does wonderful work in this sequence as Nacho, silently alternating between the obviously legit pleasure he feels working with his dad (despite himself, given these circumstances) and the anger at Mike’s intrusion that he has to keep sublimated while playing out his thread, the latter of which passes over his face like clouds over the sun before dissipating in time to talk upholstery choices with his father, grinning from ear to ear.

When the old man finally returns to the shop, Nacho asks how Mike found him here, to which Ehrmantraut simply snorts, unwilling to give Varga the satisfaction, a move that’s more intimidating than rolling up and talking tough. Nacho’s not a guy who’s used to being caught off-guard like this, and Mando sells how Nacho’s irritation is mixed with respect for a highly skilled peer.

Their subsequent conversation involves more commiserating over Dan than tussling over territory: “You underestimated just how big an idiot you were dealing with,” Mike jokes; “No, I am pretty aware,” Nacho laughs. Still, Varga’s ready to leave the mess in Mike’s hands, until Ehrmantraut threatens to involve Tuco should the cards not be returned. Preferring the carrot to the stick, as he puts it, he winds up arranging a deal that nets Nacho $60,000 in expensive auto parts, in the form of the soon-to-be-scrapped Hummer Dan idiotically purchased with his drug money. “You think I’d be caught dead driving that thing?” he asks the shocked little geek. “It looks like a school bus for six-year-old pimps.” Thus both experienced criminals teach the newcomer the lesson he so richly deserves, in a scene shot almost entirely through windshields and between car doors, as if the whole sequence is being stashed away like the cards and cash themselves. No show does this shit better, and when it’s happening, it’s hard to imagine why they bother doing anything else.

To be fair, Jimmy gets in on the act at the end. Roped in by Mike at just the right moment (he was seething at his brother Chuck’s sarcastic comment that he’d come to the office “to bear witness” to Slippin’ Jimmy, Attorney-at-Law), McGill helps Dan weasel his way out of his entanglement with the cops by claiming the hiding place they discovered at his house wasn’t for drugs, but for fetish videos involving sitting on pies. The ensuing monologue is a delight to behold: “You don’t know what a squat cobbler is? What? And you two guys are cops? Hoboken squat cobbler. Full moon moon-pie. Boston creme splat. Seriously? Simple Simon the Ass Man? Dutch Apple Ass? Guys, am I not speaking English here?” “You’ve got to be shitting us,” laughs one of the detectives. “Yeah, like i would make this up,” comes Jimmy’s perfect reply. As last year’s “Chicago sunroof” already proved, when it comes to concocting names for deviant ass-related acts, Jimmy (and the BCS writers’ room) was born to do it. Which, again, is one of them good problems: Everyone watching the show knows we’re just biding our time until he gets to do this kind of thing full-time. 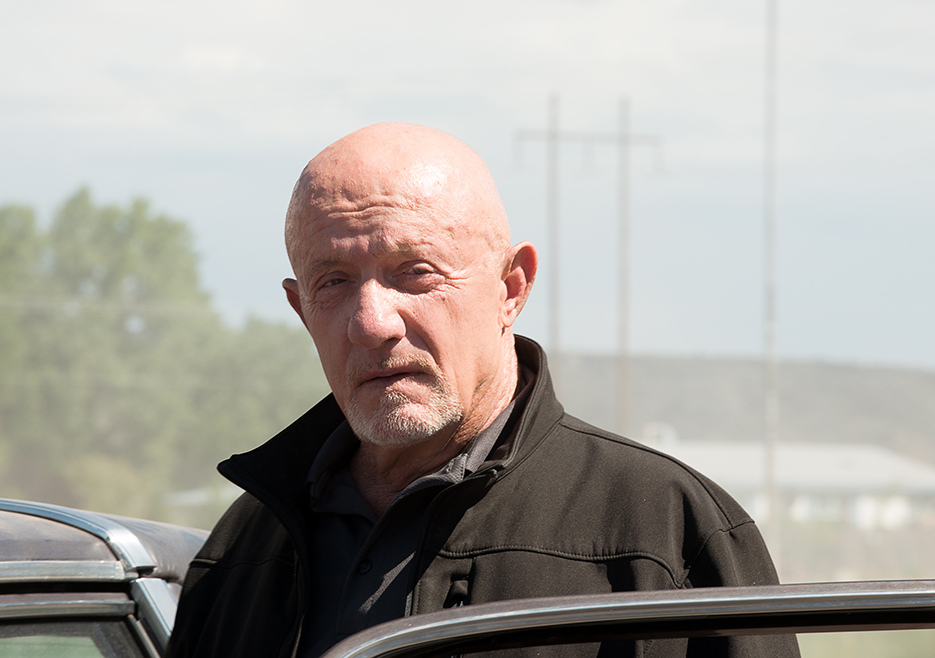