Mayor Bill de Blasio was finished talking about tenant harassment, but he told reporters he had something else to say.

“It is 2016, in the United States of America, and Donald Trump cannot disavow the KKK,” Mr. de Blasio said, a bit of disbelief in his voice. “This is unbelievable. It is disgusting. It is beyond the pale.”

Mr. de Blasio was expressing disbelief and outrage, but you could tell he was also kind of enjoying himself. And it’s no surprise he brought up the Republican front-runner unprompted: Mr. Trump, the billionaire real estate mogul, has been a favorite target of Mr. de Blasio.

Today’s comments came after David Duke, the former KKK grand wizard, urged his supporters to vote for Mr. Trump last week. Mr. Trump did disavow those comments Friday, responding to a question about it by saying, “David Duke endorsed me? OK, alright. I disavow, OK?”

But asked again about the endorsement and others from white supremacist groups by Jake Tapper on Sunday, Mr. Trump was more equivocal. He said he’d need to know more about the groups referred to by Mr. Tapper, and that he knew “nothing” about Mr. Duke. He later said a bad earpiece meant he could “barely” hear Mr. Tapper’s question.

“This is just unbelievable,” Mr. de Blasio said today. “And I think this is the kind of thing that will ultimately undo him.”

Mr. de Blasio, a former political operative—that is, if you believe operatives ever stop operating—has repeatedly made clear his intentions play a role in the presidential race, and has often had something to say about Mr. Trump. He waded into Mr. Trump’s feud with Pope Francis. He’s blasted his call to shut down Muslim immigration and to bar Muslim citizens from entering the country—something that other New York pols protested with a rally, where they complained to the media about Mr. Trump and also argued the media should stop covering him. Last week, Mr. de Blasio said anger over income inequality was helping fuel the campaign, and said he believed Mr. Trump could be the Republican nominee.

In short, Mr. Trump’s campaign has provided Mr. de Blasio and plenty of other city politicians with plenty of fodder to talk national politics and be quoted by newspapers, including this one. (There was at least one time when the two men saw eye-to-eye: when they both condemned Texas Senator Ted Cruz for his knock on “New York values.”)

A spokeswoman for Mr. Trump did not immediately respond to a request for comment. But in the past, Mr. Trump has said Mr. de Blasio was “widely considered the worst Mayor in the United States.”

Mr. Duke’s comments weren’t the only ones Mr. Trump has been asked to account for in the last several days: he also re-tweeted a Benito Mussolini quote, part of something of a sting operation launched by Gawker.  Mr. Trump later said he thought it was “a very good quote.”

Mr. de Blasio, after assailing Mr. Trump over the KKK, could not resist hitting him about his embrace of the Italian fascist dictator’s words.

“I don’t know a lot of people who are comfortable quoting Benito Mussolini,” Mr. de Blasio said. “Most people would find that to be a problem.”

Of course, Mr. Christie seems to enjoy these kinds of fights just as much as Mr. de Blasio—if not more.

“As someone who staged one of the most agonizingly helpless and drawn out endorsements in his own party, the Mayor is hardly someone to listen to on these matters,” Christie spokesman Kevin Roberts said. 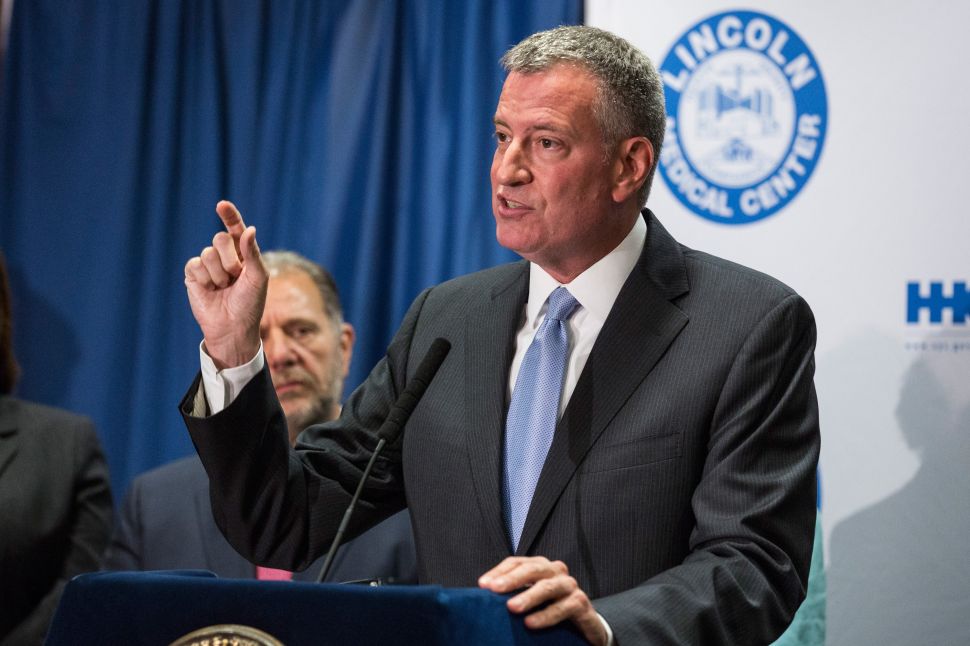