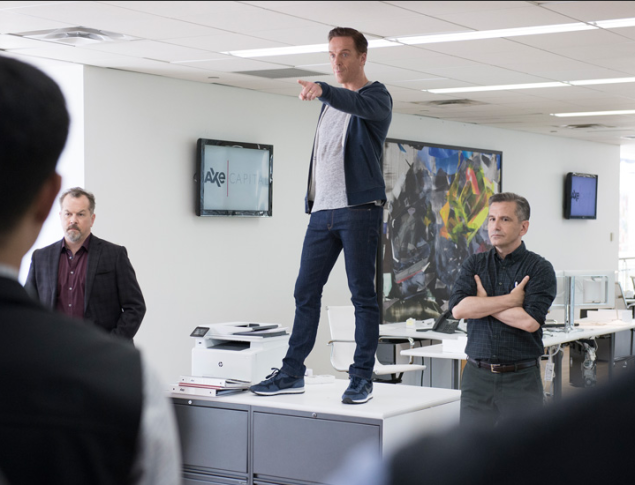 Wendy Rhoades is on a road to nowhere, or at least that’s how it seems in the opening moments. She’s walking through a generically grim hallway of cold light and exposed pipes, with Bobby Axelrod’s creepy fixer right behind her. Is she headed to her death? Nope—she’s having a rendez-vous with Axe to determine his state of mind in the wake of her husband Chuck’s move against his company. And she’s doing it naked, in some sort of candlelit spa hot-tub deal, because that ensures privacy, I guess? So begins “The Deal,” this week’s episode Billions: with the bare asses of Damian Lewis and Maggie Siff (or a reasonable approximation thereof). It’s not quite putting a cigarette out on Paul Giamatti’s chest, then pissing on the burn, but as cold opens go it’s an attention getter!

It’s also ridiculous, even if we didn’t know it was probably a pretext on Axe’s part to gather blackmail-able photographs. To be blunt, why would Wendy do something so stupid? On a show full of “the smartest guy in the room”s, she may very well be the smartest guy in any of the rooms, Bobby’s savant-like mastery of the market notwithstanding. Surely she can see that the last place she should be with the multibillionaire her federal attorney husband is trying to put behind bars is in a pool while in the nude. The most reasonable supposition is that she did it because the show needed her to, to provide Axe with the ammo he’ll need to fight Chuck off as the season progresses. If we’re being generous, though, you could see this not as a plot-hammer goof, but as a deliberate indictment. In this line of thinking, Wendy’s so keen on proving herself perfectly neutral, impossible to intimidate, and a better student of Axe and Chuck’s psyches than Axe and Chuck themselves that she doesn’t even see how idiotic what she’s doing really is. That’s certainly the kind of trap Axe, who’s legendary for always thinking like a dozen steps ahead of anyone else, would set for her. I just wish it didn’t feel like such an out-of-character misstep for her to fall for it.

It’s also not immediately clear that Axe is thinking clearly enough to be so sophisticatedly calculating. With his fixer muttering in his ear, maybe. But before that point, he’s mostly been yelling and screaming shit like “Those who would try to bring down our house will see their own houses fall,” like he’s a long-lost Lannister cousin who wandered from Westeros to Westchester. He’d blown off his lawyer’s advice, argued with his wife Lara when she told him how dumb that was, and found himself humiliated by a fellow billionaire who was supposed to do a see-and-be-seen with him in a skybox at a basketball game but hooked him up with the guys from his mailroom instead. And after the big swim, he seems no more in control than before, blowing up the deal with Rhoades’s office by mocking the size of the fine as a bug bite until Chuck gets fed up and adds a lifetime ban from trading into the mix. In his final scene he boots his chauffeur from his car and speeds and swerves down the highway while blasting “Master of Puppets.” Sure, all this could indicate he’s in a bad enough place emotionally that he’s willing to fuck Wendy over, though she’d never done him any harm. But if you’re looking for evidence that he’s mentally sharp enough to figure out how to do so with out her noticing, it provides just the opposite. Which leaves us once again in the position of suspecting the show pulled a fast one when it pulled off their robes.

Considering the amount of dick-measuring going on in this episode, however, they could have pulled out something far less pleasant. So much of the story is driven by the need of these men (and Wendy, Lara, and the women on Chuck’s staff notwithstanding, it’s men we’re talking about there) to win, regardless of the game or the prize. All the back and forth between Bobby and Chuck and their underlings and advisors about whether to prosecute or plea-bargain comes down to whether each man can live with losing face in the eyes of the other, which is petty to the point of madness in the face of the financial, personal, and political stakes involved. Sure enough, the end of the dealmaking is brought on by what amounts to schoolyard smack-talk between the two sides across the negotiation table. An even clearer illustration: When squeaky clean Dollar Bill Stearn is discovered to lead a second life with a mistress and their kids, he emails his wife the news himself rather than allow Chuck the leverage. “I’m Kaiser Soze, motherfucker,” he says; like the macho competitiveness, the tendency for these characters to quote the tough-guy movie canon at any opportunity may well be realistic, but that doesn’t make it interesting.

And let’s say it were interesting. Let’s say all the will-they-or-won’t-they between Rhoades and Axelrod made for gripping viewing, the way last week’s early-retirement fakeout did. Billions still faces the same problem: Who cares about these people? Note that this is a different question than “Who likes these people?” As Daniel Clowes once put it, “Likable characters are for weak-minded narcissists.” But I would at least like to feel some proprietary interest in this crew, whether I like them or not. Chuck’s nostril-flaring bluster and ulcer-nursing resentment have already grown tiresome. Bobby is basically a cipher whose only interest is money, the second most boring thing there is. (The first is wearing a Metallica t-shirt while sporting a normal haircut). The folks in Chuck’s office, whose names I can still barely recollect despite maintaining a thorough command of every speaking part in Game of Thrones, are not nearly as well-developed as (perhaps an unfair comparison, but oh well) Pete and Peggy and Roger and Joan and so on were by this stage of Mad Men’s first season. Short of renaming the show Wendy ’n’ Wags, the writers are going to have to slow waaaaaaaay down with the casework and simply spend time with some of these people, to convince us it’s worth our while to do the same. 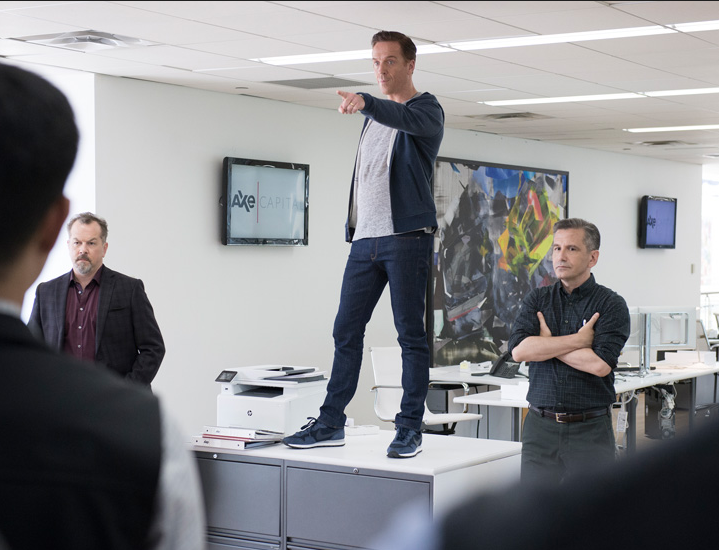